Mission Day 3 started off in a sprint. Breakfast and the morning rituals of daily medical and vigilance testing were followed by reconstructing the Raven Robot. Tim and Joe left many of the parts connected overnight to be ready for the robotics competition. Tim and Joe, together with James, converted the bunkroom back into the robotics laboratory. In addition, lots of communication configuration and video connections were routed to ensure that all of the day's activities would run smoothly, including the remote robotics operations by surgeons at the University of Washington and also students at the Cincinnati Museum Center. In the meantime, other crew members were off doing a variety of other tasks. Our habitat technician Dom scooted out on a "hooka" (a SCUBA regulator that is connected to habitat supplied air umbilical) which allowed him to venture out and do maintenance work around the outside of the habitat. Jose readied the rover for deployment, getting all the computers and controls connected. Then Joe and Jose got the opportunity to become familiar with driving the rover on the ocean sea bed. At the end, Joe was left with a large "squirrel's nest" of tangled umbilical to unravel. It's amazing how much 300 feet of umbilical can get fouled up. Something that could easily happen on the moon, and which may not be as easy to detangle without the full assist of gravity (remember lunar gravity is only one-sixth of the Earth's gravity). But in the end, even though it took three of us to unsnarl the mess, we were successful.

One of the mission objectives for today was to practice a couple of medical emergencies here in Aquarius. All the crew joined in to run the procedures to save an Aquanaut who was simulating a medical ailment and required emergency treatment. In fact, each Space Shuttle mission and International Space Station mission also has either a physician or astronauts who receive basic and emergency medical training. The aquanauts used the same medical checklist that the astronauts use on orbit to practice this morning. In the first scenario, Tim acted as if he had lost consciousness and stopped breathing. Heide, who been trained as a crew medical officer for her Space Shuttle mission last September, and Jose took the team through its paces, following and treating Tim as if he was in dire straits. In the second scenario, Jose acted as if he had inhaled some poisonous gas and then had significant problems breathing. Tim had not seen the astronaut's checklist but showed the excellent medical training that he has had by also running through the emergency procedures without problems. These same medical emergency drills have now been practiced on orbit on the International Space Station, on the Space Shuttles, on NASA's zero gravity aircraft (also known as "The Vomit Comet"), up in the Arctic Circle at Devon Island and now, for the first time, on Aquarius! 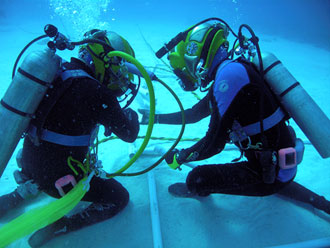 Image above: NASA flight surgeon Josef F. Schmid (right) and astronaut/aquanaut Jose M. Hernandez participate in a session of extravehicular activity for the 12th NASA Extreme Environment Mission Operations (NEEMO) mission. This image features assembly of the Luna-sea structure, which is to simulate a tower that might have to be built on the moon or Mars someday to aid in extending the horizon for communications. Image credit: NASA

The middle of the day was highlighted by two education outreach sessions. The first one was tied in with elementary school children at the Cincinnati Museum Center. Then after lunch, the Aquarius Habitat was joined remotely by three groups of grade school students spread all over the nation; schools in New Jersey, New York and California were tied together in a video conference with the NASA Distance Learning Network to join in a tour of the habitat and a great discussion about undersea work, science, robotics and careers at NASA. Several other schools also joined in on the Internet. All the students had great questions about working in the ocean, science and exploration. The aquanaut team really enjoyed seeing the students and their schools. Maybe some of them will someday join us here on Aquarius or even in space!

In the late afternoon, Heide and Joe headed out on an exploration activity dive wearing diving helmets. They were joined by surface divers who usually work at the Johnson Space Center's Neutral Buoyancy Laboratory, where the astronauts train for their spacewalks building the International Space Station. These divers assisted the aquanauts by strapping on backpacks with special weights that are being used to study the design of the next generation lunar suits. How neat it is to use the ocean to help launch our next return to the moon! Led on by the direction of the intravehicular (IVA) crew member, Jose, Heide and Joe built three more modules to the growing "LunaSea" underwater structure. Building this structure tests the aquanauts' teamwork and communication as each of the pieces of the structure must fit perfectly into each other piece for it to be correctly constructed. A nurse shark drifted by, likely looking for a moray eel that was living nearby in the coral. Three hours flew by and were ended by Jose's calling the team back inside after they had retrieved and stored their umbilical lines on the side of Aquarius.

Just before dinner Jose, Joe and Heide finished their daily work of cleaning the diving helmets and all the other gear from the dive, Dom was catching up on the required e-mails, and Tim and James took the Raven Robot apart. Everyone was also busy answering all the medical and performance questionnaires that the researchers requested the aquanauts complete (there is even homework down here in the ocean!). Finally, the "topside teams," the Mission Control Center of this team and the habitat topside team from NURC joined the aquanauts for the evening teleconference to go over the day's events, talk about any problems and discuss tomorrow's activities. More fun to come!