From the time we got out of our bunks, teeth brushed and had our morning cup of coffee, it was a steady pace to get ready for the work day. The hab techs, James and Dom, were busy getting the habitat ready for the day's activities, just like the pilot and commander would go through the post-sleep reconfigurations on orbit in the Space Shuttle. While they were busy with their tasks, the rest of the crew were busy getting ready for our mission objectives. Tim and Joe started converting the bunk room from our sleeping quarters into a "robot surgical room." They were setting up the platform for the University of Washington Raven Robot. There was a large silver table that they had to maneuver into the bunk room to which the robot arms attach. Everything was labeled, and there is a great procedure to follow to build the robot. 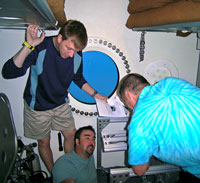 Meanwhile, Heide and Jose got dressed again to head out on a coral survey. Additional weights helped to keep them on the bottom while they strolled away from the habitat. The objective of their dive was to survey a given sector and identify and mark an interesting piece of coral, just like an astronaut on the moon would survey the lunar landscape and identify interesting lunar formations. Using a navigation unit, they went out 450 feet away from the habitat out towards a safe haven called the Kamper Station. Five minutes after arriving, Dom sent out an underwater alarm to test the emergency recall signal. The delay of the sound was noticeable. At the Kamper Station, an aquanaut can fill with air, kind of like a filling station in the ocean. Heide and Jose topped off their tanks and began their survey. Because of the limited visibility, Heide set up a line reel while she and Jose explored off the excursion line. Along the route, Heide identified a well camouflaged scorpion fish, in addition to various coral formations. The coral reefs were marked in the navigation unit so that another set of divers can locate the same location on a future dive. During this dive, the two aquanauts wore an outer garment so that they could be weighted down to simulate a space suit on the lunar surface. Jose and Heide really enjoyed the extra weight, as it made them think what it would be like to work on the moon! 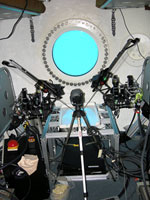 Image to left: A two-armed remotely controlled surgical robot from the University of Washington known as Raven is photographed inside the undersea habitat for the 12th NASA Extreme Environment Mission Operations mission. Image credit: NASA

Tim had a very challenging day as he connected the myriad of parts and pieces that made up the robot. He dove into the spaghetti of cables and computer connections, one hand on a wrench and the other on a telephone as he coordinated video and sound to the robot. Surgeons from across the country, as near as Key Largo, Florida, and as far away as Seattle, Washington, were able to log in and actuate the two arms of the robot to move pieces in the surgical field. Tim was really working hard to get it all right as today's exercises were more of a test-run for tomorrow's activities. 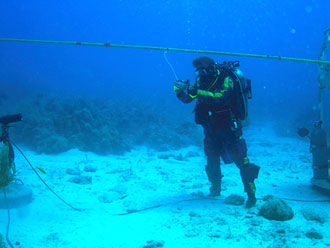 The second EVA event kicked off the initial stages of the Luna Sea construction project. The EVA crew members for this activity were Joe and Jose. After deciding on a well open space for the construction of the multi-story Luna Sea structure, Joe and Jose went right to work on building its base. The first stage pieces were also unpacked with most of the front face assembled. Several fish joined them to supervise. Jose laid out the pieces and Joe went to work joining them with pins and washers. Two surface divers, including Marc Reagan, NEEMO 12 Mission Director, joined as well to take pictures and video. Heide, who was serving as the in-vehicle activity member sent out "Scuttle" the rover to give her also a front seat view of the construction. Two hours literally flew by as Jose and Joe were joining the pieces of the structure as they made sure not to trap their umbilical lines in between two sections. Heide reminded them that their bottom time was indeed limited and called them back to the habitat to make sure that no one exceeded their stay at the deeper depth. Even though the aquanauts are in saturation, they have to pay attention if they go deeper than the habitat depth, just like any other dive. After Joe and Jose made it back to the habitat, wrapping the umbilical lines in figures of eight was made enjoyable by the near weightless conditions of the ocean/simulated lunar surface. Jose and Joe might have had a basketball goal set up to do some "dunks" with their air supply lines jumping literally 10 feet above the bottom neatly wrapping up their work. 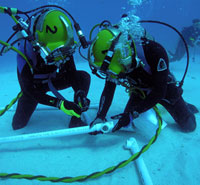 The evening was filled with the evening planning conference with topside and our simulated Mission Control, getting dinner, looking at all the photos taken during the day, writing journals, sending e-mail home and listening to Dom's new collection of hard rock music set to classical instruments.

Good night from 50 feet below the waves! See you on the Internet in the morning.

Today at ~ 10:20 am Heide Stefanyshyn-Piper, Jose Hernandez, and Joe Schmid joined an elite group of people in this world who have spent 24 hours under the sea in "saturation", making them the world's 3 newest aquanauts. James Talacek, Dominic Landucci, and Tim Broderick, of course, were already veteran aquanauts. Heide, by virtue of having flown in space and lived under the sea, becomes the 15th "aquastronaut"!

During NEEMO 12, the team will be conducting a variety of advanced technology experiments including robotic telesurgery. Using two remotely controlled surgical robots, school children in Cincinnati and scientists in Nashville will be able to control the robotic arms of these robots in the Aquarius habitat. The surgical robots are known as the RAVEN from the University of Washington and the M-7 from SRI International. The videoconferencing capabilities are supported by HaiVision Systems, Inc. (Montreal, Canada). In addition to hands-on demonstrations, robotic telesurgery technology tested during the mission will help scientists and surgeons understand the challenges of distance and interplanetary communication time delay. Technologies such as surgeon-guided automatic robot function could improve the care of astronauts on future lunar missions as well as soldiers in the battlefield. 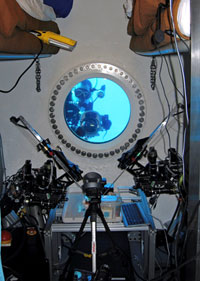 Image to right: RAVEN set up in the operating room (aka the bunkroom). Image credit: NASA

The University of Washington's (UW) BioRobotics Lab looks at the NEEMO mission as a grand opportunity to test the robustness and capabilities of the RAVEN surgical robot. Supporting us here from UW are Mitch Lum and Diana Friedman. The BioRobotics Lab's mission is to develop science, technology, and human resources at the interface between robotics and biological movement systems. The goal is to produce useful, innovative research and technology as well as trained researchers fluent in both technological and biological systems, and the tasks they are performing with the RAVEN this week support that objective.

Finally, the crew was involved in lunar surface exploration activities. Since we can change the "weight" of a crew member using buoyancy, we can make them feel as if they are in the one-sixth gravity environment of the moon. That's a good thing once you add the heavy spacesuits! Their first exploration activity involved picking up a quick surface sample (in case they had to immediately depart), and methodically surveying the working area and marking geological sites of interest so they can return on a future day and do more detailed analyses.

Thanks for following along.