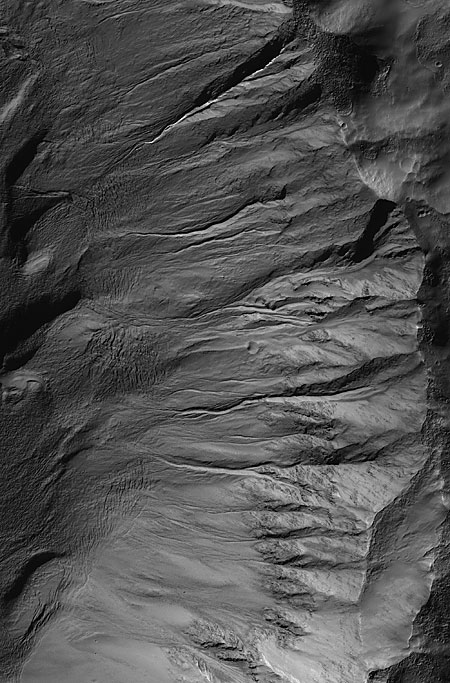 Crisp details in a suite of mid-latitude gullies on a crater wall are captured in this Mars Global Surveyor (MGS) Mars Orbiter Camera (MOC) view obtained in southern winter on 12 October 2006. During southern winter, shadows are more pronounced and the atmosphere is typically quite clear. These gullies, which may have formed in relatively recent martian history by erosion caused by flowing, liquid water, are located in a crater on the east rim of Newton Crater near 40.4S, 155.3W. Sunlight illuminates the scene from the upper left. The picture covers an area about 3 km (1.9 mi) wide; the crater rim is on the right side of the image, the crater floor is on the left. North is toward the top/upper left.

All of the Mars Global Surveyor images are archived here:

Mars Global Surveyor was launched in November 1996 and has been in Mars orbit since September 1997. It began its primary mapping mission on March 8, 1999. Mars Global Surveyor is the first mission in a long-term program of Mars exploration known as the Mars Surveyor Program that is managed by JPL for NASA's Office of Space Science, Washington, DC. Malin Space Science Systems (MSSS) and the California Institute of Technology built the MOC using spare hardware from the Mars Observer mission. MSSS operates the camera from its facilities in San Diego, CA. The Jet Propulsion Laboratory's Mars Surveyor Operations Project operates the Mars Global Surveyor spacecraft with its industrial partner, Lockheed Martin Astronautics, from facilities in Pasadena, CA and Denver, CO.