NASA Mars Picture of the Day: Mars at Ls 121 deg 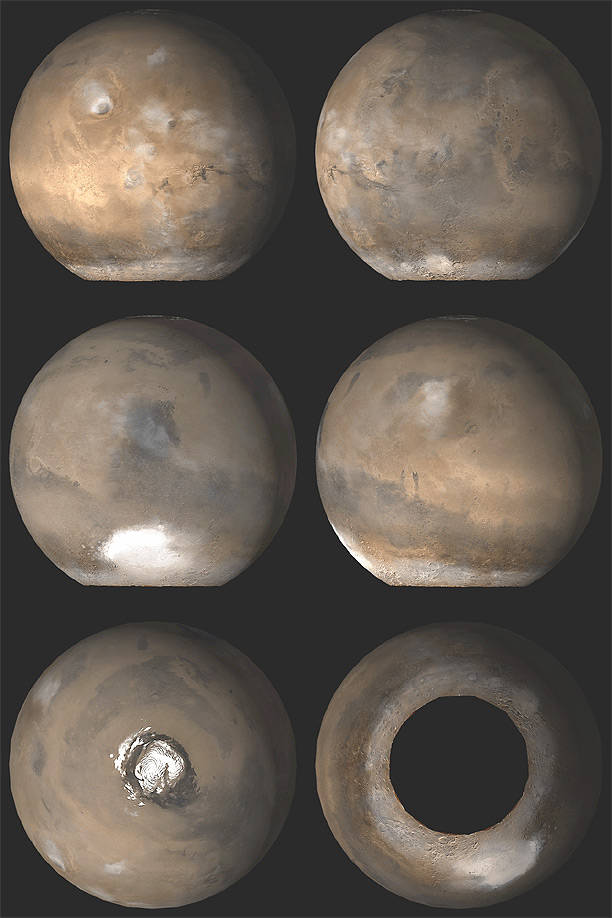 These images capture what Mars typically looks like in mid-afternoon at Ls 121°. In other words, with the exception of occasional differences in weather and polar frost patterns, this is what the red planet looks like this month (October 2006).

Six views are shown, including the two polar regions. These are composites of 24–26 Mars Global Surveyor (MGS) Mars Orbiter Camera (MOC) daily global mapping images acquired at red and blue wavelengths. The 'hole' over the south pole is an area where no images were obtained, because this polar region is enveloped in wintertime darkness.

Presently, it is summer in the northern hemisphere and winter in the southern hemisphere. Ls, solar longitude, is a measure of the time of year on Mars. Mars travels 360° around the Sun in 1 Mars year. The year begins at Ls 0°, the start of northern spring and southern autumn. Northern summer/southern winter begins at Ls 90°, northern autumn/southern spring start at Ls 180°, and northern winter/southern summer begin at Ls 270°.

Ls 121° occurs in the middle of this month (October 2006). The pictures show how Mars appeared to the MOC wide angle cameras at a previous Ls 121° in February 2001. The six views are centered on the Tharsis region (upper left), Acidalia and Mare Eyrthraeum (upper right), Syrtis Major and Hellas (middle left), Elysium and Mare Cimmeria (middle right), the north pole (lower left), and the south pole (lower right).