The shadow of Epimetheus, one of Saturn's co-orbital moons, races across the planet's restless cloud tops. Epimetheus (116 kilometers, or 72 miles across) cruises along beyond the orbits of the narrow F ring and its shepherd moons.

Farther south on Saturn, the swirls and eddies are obscured by the shadow of the outer A ring and its two prominent, moon-containing gaps, Encke (bottom) and Keeler (dim, at the A ring edge).

The image was taken with the Cassini spacecraft wide-angle camera using a spectral filter sensitive to wavelengths of infrared light centered at 728 nanometers. The view was obtained on June 30, 2006 at a distance of approximately 335,000 kilometers (208,000 miles) from Saturn. Image scale is 16 kilometers (10 miles) per pixel.

The image was taken in visible light with the Cassini spacecraft narrow-angle camera on March 24, 2006 at a distance of approximately 1.9 million kilometers (1.2 million miles) from Enceladus and at a Sun-Enceladus-spacecraft, or phase, angle of 162 degrees. Image scale is 11 kilometers (7 miles) per pixel. 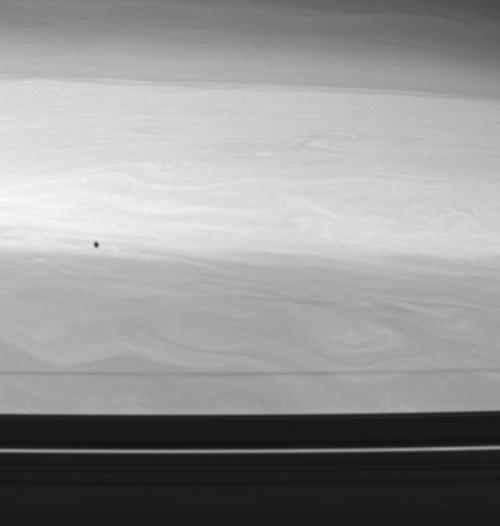 The Cassini-Huygens mission is a cooperative project of NASA, the European Space Agency and the Italian Space Agency. The Jet Propulsion Laboratory, a division of the California Institute of Technology in Pasadena, manages the mission for NASA's Science Mission Directorate, Washington, D.C. The Cassini orbiter and its two onboard cameras were designed, developed and assembled at JPL. The imaging operations center is based at the Space Science Institute in Boulder, Colo.