Image data acquired by the AVNIR-2 onboard the "Daichi"

The Japan Aerospace Exploration Agency (JAXA) would like to announce that image data was successfully acquired by the Advanced Visible and Near Infrared Radiometer type-2 (AVNIR-2) onboard the Advanced Land Observing Satellite "Daichi," which was launched on January 24, 2006 (Japan Standard Time, JST.) The data was acquired as part of the initial functional verification test.

The attached image of the Tanegashima area was observed by the AVNIR-2 at 10:50 a.m. on Feb. 17 (JST), and later received at the Earth Observation Center (in Hatoyama-cho, Hiki-gun, Saitama Pref.)

The Daichi is the only satellite that can perform high resolution observations of one specific area with both light and radio frequency by using both the Advanced Visible and Near Infrared Radiometer type 2 (AVNIR-2) and the Phased Array type L-band Synthetic Aperture Rader (PALSER) simultaneously. Through this ability, it can identify the earth's surface more precisely. 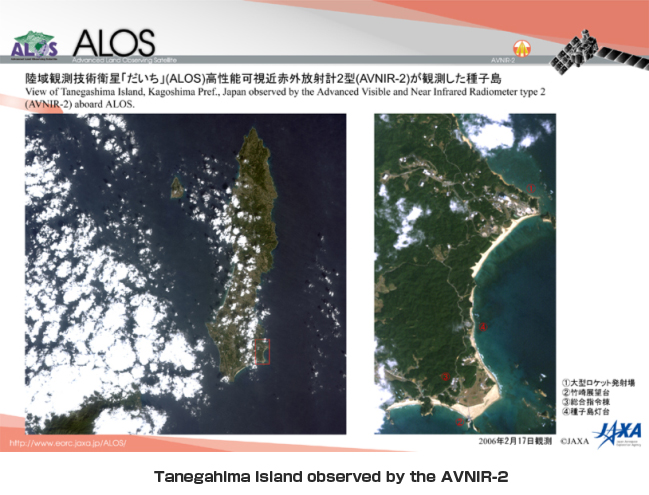