On Thursday, February 16th at 10:00 a.m., the Committee on Science will hold a hearing on the National Aeronautics and Space Administration's (NASA) Fiscal Year 2007 (FY07) budget.

NASA's overall proposed budget for FY07 is $16.8 billion, an increase of 1 percent from the FY06 appropriated budget, or up 3.2 percent if one excludes the hurricane emergency supplemental funding ($350 million) from the FY06 base. (That can be compared to the .5 percent cut proposed for non-security discretionary spending as a whole.) The FY07 budget includes projections for the out-years that show NASA increasing by 2 to 3 percent a year in FY08 through FY11.

The proposed NASA FY07 budget differs significantly from how NASA projected it would proceed when it released its FY06 budget. (Each NASA budget submission includes a five-year runout.) There are two reasons for this. First, the FY07 proposed budget is $170 million below the level that NASA was projected to receive in FY07 in last year's budget. Second, and more significantly, NASA Administrator Mike Griffin announced at a Science Committee hearing last year that the FY06 five-year projections for the Space Shuttle were $3-5 billion below the amount actually needed to keep the Shuttle flying through 2010. As a result, compared to past projections, the FY07 budget shifts funding from Science and, to a lesser extent, Exploration to fully fund the Shuttle program through 2010. Compared to the FY06 projections, the FY07 budget proposal provides about $2.2 billion more to the Shuttle program between FY06 and FY10.

The proposed FY07 budget is also about $1.1 billion less than the level authorized in the NASA Authorization Act (P.L. 109-155) Congress passed in December. This is because in writing the Act, Congress handled the Shuttle shortfall by adding money to NASA's total spending. Congress also provided more money than NASA had then requested for Science (to handle cost overruns in several programs and an unfunded commitment to the Hubble Space Telescope) and to Aeronautics (to prevent further cuts).

The key features of the proposed FY07 budget include:

Questions about the budget proposal basically fall into three categories:

Impact of Science cuts. The FY07 budget proposes to cut Science by $3.1 billion from FY06-FY10 compared to what was projected in the FY06 budget over the same period. Programs that sustained the largest cuts include the Mars robotic exploration program (by focusing on science-based missions every other year and dropping activities that were more related to laying the groundwork for human exploration), planned advanced telescopes to find planets around distant stars, and several programs to observe phenomena predicted by Einstein's theories, such as black holes, the Big Bang, and "dark energy." Several key earth science missions are deferred or cancelled. In addition, the FY07 budget proposes cutting funds for research (as opposed to the satellites or telescopes themselves) by 15 percent. What will be the long-term impact of these cuts? Is earth science any better off than it was last year when the National Academy of Sciences raised alarms about the future viability of the program? Will there be enough programs coming down the line to provide sufficient opportunities for scientists and engineers?

Space Shuttle and Space Station Challenges Remain. NASA believes it has solved the foam shedding problem that occurred again on the most recent Shuttle flight and hopes to launch the next Space Shuttle in May, although that could slip to July. NASA's latest plan calls for conducting 16 flights to complete the assembly of the International Space

Station (plus one flight sometime in 2008 to repair the Hubble Space Telescope). The Space Shuttle will then be retired in 2010. The tentative plan is to launch two flights in FY06, four in FY07, five each in FY08 and 09 and one in FY10, with the Shuttle retiring by Dec. 31, 2010. While the Shuttle program has accomplished that launch rate in the past, there is little tolerance for any delays. To accomplish this, the Shuttle program faces a number of challenges, including maintaining its key staff as the program moves toward completion. Between FY06 and the Shuttle retirement, NASA intends to spend approximately $20 billion on the program. (The program costs about the same amount regardless of how many Shuttles are launched because the primary expenses of the program are the continuing costs of maintaining the workforce and facilities.)

On the Space Station side, NASA has cut ISS-related research funding by 50 percent for the second year in a row. Between FY06 and FY10, NASA intends to spend more than $10 billion on the Space Station program. Can the Shuttle successfully complete the projected number of flights? How high a priority are the Shuttle and ISS programs?

Are the synergies between Shuttle and CEV/CLV realistic? NASA is assuming that it will save money by finding "synergies" between the Shuttle program and the efforts to develop the CEV and its launch vehicle (CLV). This is plausible because NASA has decided to use several key Shuttle parts in the CEV and CLV. For example, the Solid Rocket Boosters (SRB) used on the Shuttle will be the first stage of the CLV. To ease the transition on the workforce and to take advantage of facilities, systems, and capabilities that the two programs have in common, NASA has tried to identify areas of "synergy" to save money. Given the constrained budget, has NASA been realistic in its assumptions for these savings?

Challenges of Implementing the Exploration System Architecture. NASA estimates that it will need about $100 billion between now and 2018 to return to the Moon. Given that nearly every major government space program has run into cost growth and schedule delay problems, often because they were overly optimistic about the technologies, underestimated the complexity, and underestimated the cost, what is NASA's approach to minimize the possibility that the CEV and CLV will run into the same problems? If the CEV or CLV run into cost growth problems will NASA stretch the program schedule, as it has done on the Webb telescope program, or will it look to other non-Exploration programs for funds?

Hurricane Katrina Response and Recovery. Hurricane Katrina inflicted significant damage on the Stennis Space Center in Mississippi and the Michoud Assembly Facility in Louisiana. The Michoud facility is located just outside New Orleans and is the manufacturing facility for the Space Shuttle's External Tanks. NASA's cost estimate for the damage, including emergency response and programmatic costs is $760 million. Last year, Congress provided NASA with $350 million in emergency relief funding. In total, NASA has put $450 million toward hurricane relief. To pay back the $100 million NASA internally redirected and make up the shortfall from NASA's estimate of the damage, the agency will need about $300 million in additional funds. Another hurricane supplemental request may be sent to Congress shortly. How will NASA handle hurricane relief if additional funds are not available?

Over the period from FY06-FY10 the Science program is to be cut by approximately $3.1 billion as compared with the FY06 projected budget over the same period. These cuts were primarily used to fund the shortfall in the Space Shuttle program.

The following are highlights of NASA's FY07 budget for Science:

Since becoming Administrator, Griffin has overhauled NASA's approach for returning to the Moon. As a result of NASA's Exploration Systems Architecture Study (ESAS) completed last year, NASA hopes to accelerate the delivery of the Crew Exploration Vehicle (CEV) to minimize the gap following the Shuttle retirement in 2010. The budget documents state that CEV will come "on-line by 2014, and potentially much sooner." In briefings, NASA has said that until it awards a CEV development contract, it cannot be sure whether it is technically or financially feasible to move ahead before 2014. The contract solicitation sets 2012 as a target launch date, and NASA officials have said it would be extremely unlikely in any event to launch before late 2011.

The plan also calls for NASA to develop two new launch vehicles to be derived from Shuttle elements, one to launch the CEV and one to launch heavier loads to return to the Moon by 2018. The preliminary ESAS cost estimate through 2018 is $104 billion, excluding the operational costs of CEV missions to the ISS, which are expected to cost $12 billion between FY12 and FY16. Estimates for cost and schedule will be refined as the program moves forward. To fund CEV development, NASA has virtually eliminated all of the long-term high-risk research and technology projects beyond what is necessary to return humans to the Moon for short visits.

NASA's Exploration Systems budget request as a whole for FY07 is $3.98 billion, an increase of $930 million, or 30 percent, over the FY06 appropriated budget. Compared to projections made in last year's budget, however, the Exploration Systems budget is cut by nearly $1.6 billion over the period from FY06-FY10. This cut, in addition to cuts in the Science program, was required to pay for the funding shortfall in the Shuttle and Station budgets.

Not all the funding for CEV requested for FY07 will be spent next year. NASA wants to "bank" funding for CEV, so that it can begin to accumulate funds that will be needed in the peak years of development. NASA has not yet said how much will actually be spent in FY07.

The following are highlights of NASA's FY07 budget for Exploration Systems:

Beginning last fall, NASA has been revamping its aeronautics program to move away from narrowly focused technology demonstration projects and toward a more fundamental research program. The NASA Authorization Act directs NASA to lead a government-wide effort to develop a National Aeronautics Policy to guide NASA's aeronautics research program. That policy plan is due at the end of 2006.

NASA's FY07 Aeronautics Research budget request is $724 million, a $160 million reduction, or 18 percent cut from FY06. NASA's aeronautics research program consists of three integrated research programs: the Aviation Safety Program, the Airspace Systems Program, and the Fundamental Aeronautics Program. A new component has been added this year called the Aeronautics Test Program. It was created to ensure that critical facilities, such as wind tunnels, remain available at a reasonable cost to users.

The following are highlights of NASA's FY07 budget for Aeronautics Research:

In developing the FY07 budget, the Administration had a clear choice regarding Shuttle and Station. Given that the fixed costs on the Space Shuttle and Space Station consume the vast majority of their budgets, the only choices basically boiled down to either finding the funds to make the program "whole" or ending the Shuttle program, thereby prevent any future assembly of the ISS. The FY07 budget reflects the Administration's decision to make the program whole.

NASA's FY07 Space Operations budget request is $6.2 billion, which is about 40 percent of the whole NASA budget. This is about a 4 percent cut from last year's level, but an increase of $47 million over last year's projection for the FY07 budget. Over the period from FY06-FY10 the Space Operations budget is increased by $3.6 billion as compared to the levels projected in last year's budget for the same period. This account includes the Space Shuttle, the International Space Station (ISS), and a much smaller line called Space and Flight Support.

The following are highlights of NASA's FY07 budget for Space Operations:

Other programs and issues: 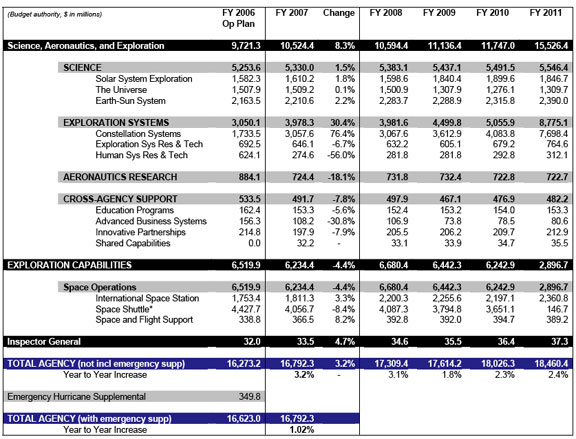