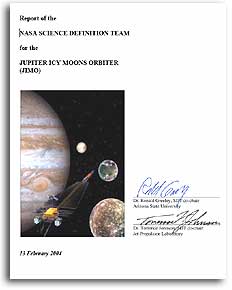 The Jupiter Icy Moons Orbiter (JIMO) affords an exciting and unprecedented opportunity to explore a part of the solar system identified by the National Academy of Sciences as critical in the search for life's origins and the understanding of planetary evolution. The Science Definition Team (SDT, Appendix 1) for JIMO consisted of 38 scientists representing the community interested in the exploration of the Jupiter system, with a focus on Europa, Ganymede, and Callisto. The SDT was appointed by NASA in February 2003 to derive the scientific objectives for the JIMO mission. Early in the process, the SDT determined that the approach to the study should include the following guidelines:

The scientific foundations for the JIMO mission include recommendations from previous studies by the National Research Council (NRC, 1999, 2003) and NASA (2003), which identify Europa and the Jupiter system as high priority objects for solar system exploration and the search for life's origin. In addition to these documents, input to the SDT was obtained from a community-wide meeting entitled "Forum on Concepts and Approaches for the Jupiter Icy Moons Orbiter," LPI (2003). After a series of presentations, the ~150 participants at the Forum were organized into seven groups by scientific discipline to identify the high priority issues that could be addressed by the JIMO mission. The results from the seven groups served as the basis for subsequent SDT deliberations.

The goals presented in this document, and their detailed objectives and investigations, were which includes three crosscutting themes: Oceans (finding their locations, studying the structure of their icy crusts, and assessing active internal processes), Astrobiology (determining the types of volatiles and organics on and near the surfaces, and the processes involved in their formation and modification), and Jovian System Interactions (studying the atmospheres of Jupiter and the satellites and the interactions among Jupiter, its magnetosphere, and the surfaces and interiors of the satellites).

The SDT has formulated four equally important goals for the JIMO mission. Within each goal, the objectives, investigations and measurements have been identified and prioritized. The goals are summarized as follow:

JIMO near-global high resolution imaging in the visible and infrared, with corresponding topographic mapping and subsurface sounding, will enable the determination of the styles, distribution, and importance of active processes that have shaped the icy satellites' surfaces over time. This information will provide further insight into why the evolutionary path of each moon is different. These measurements will enable the determination of the places and processes by which Europa's putative ocean might communicate with the surface, and how erosional processes operate. In addition, high resolution mapping of selected areas will enable the identification of sites that are the most promising candidates for exploration on the surface. Remote sensing observations of Io will provide insight into geologic and magnetospheric processes, heat flow, and exchange of material among all of the satellites.

The primary objective in meeting this goal is to determine the presence and location of liquid water beneath the moons' icy crusts. This will involve understanding the extent of the satellites' differentiation, establishing whether they contain subsurface oceans, characterizing and mapping the location of possible water and brines, and measuring the thickness of the ice overlying any putative oceans. Geophysical methods (gravity, altimetry, magnetic field) are the primary means of making a global estimate of ice thickness. These techniques will be greatly enhanced by making seismic measurements on the surface. A secondary objective is to assess the active processes that have caused the moons to evolve internally. This objective involves searching for evidence of current and past internal activity, as reflected by gravitational and magnetic fields, topographic and subsurface changes, and evidence of thermal anomalies. A tertiary objective is to understand the formation and evolution of the Jupiter system by investigating the composition of Jupiter's deep atmosphere, and by placing bounds on the orbital evolution of the satellites by studying the orbital and rotational dynamics of all four large satellites, including measuring the rate at which Io dissipates tidal energy in the form of heat.

The JIMO mission provides a unique opportunity to seek evidence of biotic or prebiotic activity in an extraterrestrial environment. Liquid water is essential for all known living systems and the icy satellites may contain some of the largest reservoirs in our solar system. Whether or not icy satellites have ever provided an abode for biotic or prebiotic activity has important implications for understanding the origin of life. The detection of signs of past or present life will require measurements of certain biogenic organics with specific biological patterns and chirality

of atoms that constitute biomass. In addition, life generally leads to chemical disequilibrium in the environment and, thus, in situ or remote sensing of metabolic byproducts can help detect signs of life. To evaluate habitability it is important to determine the presence of liquid water, the concentration of major biologically relevant ions as sources of energy and nutrients, and the potential effects of radiation on life forms.

The planet, satellites, rings, dust, gas, particles and fields in the Jupiter system influence each other through many complex interactions. Understanding these interactions provide insight into the characteristics of other bodies in the Solar System. Measuring Jupiter's elemental abundance ratios will help determine the nature, history, and distribution of volatile and organic compounds in the Solar System. Understanding of the dynamics of Jupiter's atmosphere and magnetic field provide insight into the deeper structure of Jupiter.

The icy moons interact with Jupiter's magnetosphere through charged particle bombardment, which modifies their surface chemistry, produces tenuous atmospheres and ionospheres, and leads to rings of gas and dust circling Jupiter. These processes are generally harmful to life, but they could also be a major source of energy for possible biota in the oceans of the icy moons. Finally, observations of the charged particle bombardment on the chemistry of the environment is important to studying their habitability. Measurements from JIMO on the electromagnetic induction responses from the moons to Jupiter's rotating field will reveal information about the interiors of the moons, including the presence of liquid sub-ice oceans.

Based on the prioritizations within the four goals outlined above, the SDT has formulated a set of science baseline investigations and measurements and science floor investigations and measurements. The science floor is defined as the minimum science the JIMO mission must accomplish in order to be viable from a scientific standpoint, while the baseline represents the ideal JIMO mission the SDT believes should be undertaken. These are summarized in Table 1.1.

A critical element of the baseline mission is a small surface package for Europa, termed the Europa Surface Science Package (ESSP). Many high-priority measurements can be made only from the surface of Europa. The SDT crafted these high-priority measurements for a landed package within the framework of the objectives and investigations for the overall mission and are grouped into three science areas: 1) Astrobiology, in which measurements of organic materials, inorganics (e.g., oxidants) relating to survival and recognizability of biochemical signatures of life, and searches for patterns indicative of biology must be made in situ, 2) Geophysics, in which acoustic/seismic measurements made from the surface enable constraints to be placed on the interpretations of data taken from orbit regarding the presence of liquid water and the structure of the icy crust, and 3) Geology-geochemistry in which in situ measurements of other inorganic chemical species (e.g., sulfate hydrates) at the surface provide ground truth for remote sensing data and insight into the structure of the surface at sub-meter scales and the possibility of chemical exchange between the surface and a sub-surface ocean. Astrobiology and geophysical measurements are of highest priority; while geology-chemistry measurements not directly related to the search for biochemical signatures are of lower priority but should be done to determine composition of the non-ice materials thought to be sulfate hydrates and possibly originating from the ocean. Data from the Galileo mission are sufficient to identify sites of scientific interest for the ESSP. The SDT recommends that the final selection of a site be a community-wide activity.

The overwhelming consensus of the SDT is that, given the high scientific potential from a landed package and the large resources that would be committed to the JIMO mission, a surface package to Europa should be included. Moreover, the SDT considers that up to ~25% of the science resources, in particular, mass, could be devoted to the ESSP. However, in recognition of the potential implementation uncertainty, the SDT has placed the ESSP in the baseline mission, but not in the science floor. A study of the feasibility of the ESSP should be made, and the SDT would assess the scientific trades in response to the study.

The SDT recognizes that the revolutionary nature of the JIMO spacecraft will require significant technology development time before a payload is competitively selected. In order to provide science requirements during that development, the SDT has worked closely with the JIMO Project to derive the Payload Accommodation Envelope (PAE). The PAE is a set of spacecraft requirements needed to accomplish the recommended science of the JIMO mission. A particularly important element is the ability to change the trajectory of the spacecraft repeatedly to orbit the icy moons individually. The SDT urges NASA to continue working with the SDT to refine the PAE until such time that instruments teams are selected and can work directly with the JIMO Project.

Based on previous studies by the National Academy of Sciences and NASA, results from the community "Forum," and discussions within the JIMO Science Definition Team, the SDT recommends that:

The recommendations and details on scientific potential outlined in this report for the Jupiter Icy Moons Orbiter represent the deliberations of the JIMO Science Definition Team. Although some individuals of the 38-member team had different view points on some issues, the report reflects the general consensus of the SDT. Because the JIMO concepts will continue to evolve beyond the date of this report (February 2004), it is important that a dialog continue among NASA Headquarters, project personnel, and the scientific community. In this context, there is the potential for this report to be revised and augmented in the future.