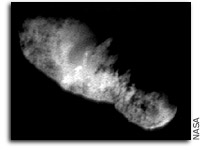 Comets are sometimes described as "dirty snowballs," but a close flyby of one by NASA's Deep Space 1 spacecraft last fall detected no frozen water on its surface.

Comet Borrelly has plenty of ice beneath its tar-black surface, but any exposed to sunlight has vaporized away, say scientists analyzing data from Deep Space 1, managed by NASA's Jet Propulsion Laboratory, Pasadena, Calif.

"The spectrum suggests that the surface is hot and dry. It is surprising that we saw no traces of water ice," said Dr. Laurence Soderblom of the U.S. Geological Survey's Flagstaff, Ariz., station, lead author of a report on the Borrelly flyby results appearing in the online edition of the journal Science.

"We know the ice is there," he said. "It's just well- hidden. Either the surface has been dried out by solar heating and maturation or perhaps the very dark soot-like material that covers Borrelly's surface masks any trace of surface ice."

The Deep Space 1 science team released pictures and other initial findings days after the spacecraft flew within 2,171 kilometers (1,349 miles) of the comet's solid nucleus on September 22, 2001. This week's report provides additional details about the nucleus and the surrounding coma of gases and dust coming off of the comet as measured by one of Deep Space 1's scientific instruments.

"Comet Borrelly is in the inner solar system right now, and it's hot, between 26 and 71 degrees Celsius (80 and 161 degrees Fahrenheit), so any water ice on the surface would change quickly to a gas, " said Dr. Bonnie Buratti, JPL planetary scientist and co-author of the paper. "As the components evaporate, they leave behind a crust, like the crust left behind by dirty snow."

Borrelly is unusually dark for an object in the inner solar system. The comet's surface is about as dark as a blot of photocopy toner, possibly the darkest surface in the solar system. It is more like objects in the outer solar system such as the dark side of Saturn's moon Iapetus and the rings of Uranus.

"It seems to be covered in this dark material, which has been loosely connected with biological material." Buratti said. "This suggests that comets might be a transport mechanism for bringing the building blocks of life to Earth." Comets may have played an important role in supplying organic materials that are required for life to originate.

Soderblom points out that Borrelly's old, mottled terrain with dark and very dark spots -- different shades of black -- are apparently inactive. Ground-based observations estimated that 90 percent of Borrelly's surface might be inactive, and the observations taken by Deep Space 1 show that this is indeed true.

"It's remarkable how much information Deep Space 1 was able to gather at the comet, particularly given that this was a bonus assignment for the probe," said Dr. Marc Rayman, project manager of the mission. Deep Space 1 completed its original goal to test 12 new space technologies and then earned extra credit by achieving additional goals, such as the risky Borrelly flyby. "It's quite exciting now as scientists working with this rich scientific harvest turn data into knowledge."

Images of comet Borrelly from Deep Space 1 are available at http://www.jpl.nasa.gov/images/ds1/ds1_borrelly.html .

More information on the Deep Space 1 mission is available at http://nmp.jpl.nasa.gov/ds1/

. Deep Space 1 was launched in October 1998 as part of NASA's New Millennium Program, which is managed by JPL for NASA's Office of Space Science, Washington, D.C. The California Institute of Technology, Pasadena, manages JPL for NASA.