exactEarth Ltd. ("the Company"), a leading provider of Satellite-AIS data services, announces its financial results for the three- and twelve-month periods ended October 31, 2019. All financial figures are in Canadian dollars unless otherwise stated.

"2019 was a milestone year for exactEarth in which we celebrated our tenth anniversary, completed our second-generation satellite constellation, exactView RT, and delivered solid topline growth," said Peter Mabson, President and CEO of exactEarth. "We also completed a private placement financing early in the year, which strengthened our balance sheet and provided financial support for our operational and growth initiatives."

"With the completion of exactView RT we introduced the world's first global, real-time Satellite-AIS service. With its real-time data delivery, superior vessel detection, rapid update rate and long lifecycle, we believe that exactView RT provides us with a measurable and sustainable competitive advantage. We are pleased so far with the market's response to the service, which is reflected in the partnership and sales agreements we signed, both new and renewal, during 2019 and subsequent to it. We look for this trend to continue in 2020 and beyond as market awareness of its capabilities expands further in both the commercial and government markets."

Mr. Mabson continued: "Subsequent to year-end, on January 21, 2020, we announced updated terms to our core AIS business agreement with L3Harris. We believe that the revised agreement is a significant positive development for the Company as it provides a reduced and simplified cost structure for the business going forward, while providing an improved framework for exactEarth to capitalise on the promising growth potential of the AIS analytics market."

"With the A&R SABA now in place, we expect that lower costs in Q1 2020 will help to drive an improvement in gross and operating margins in the quarter and for the fiscal year ahead," said Sean Maybee, CFO of exactEarth. "All else being equal, the A&R SABA results in a reduction in current quarterly expenses of approximately $800,000 as compared to the prior SABA agreement. These savings will increase as our revenue grows. For example, under the A&R SABA, if the Company's annual S-AIS data revenues were to grow to USD $16.0 million, then the savings on our annual payments to L3Harris would be $6.7 million (based on a current exchange rate of 1.319 CDN to USD) compared to the prior SABA agreement."

Full details on the A&R SABA can be found in the Company's Fiscal 2019 Management Discussion & Analysis, which is available at www.exactearth.com and www.sedar.com.

Infrastructure fee and revenue share amendments in the A&R SABA are effective as at August 1, 2019; however, those amendments are not reflected in the financial statements for the three- and twelve-month periods ended October 31, 2019. As the A&R SABA was completed during the first quarter of 2020, the financial statements for the three months ended January 31, 2020 will reflect the updated terms in the agreement.

Order bookings for the Q4 2019 and Fiscal 2019 periods were $1.5 million and $13.5 million, compared to $5.4 million and $16.9 million in the same periods last year. Subsequent to year-end, the Company received orders from a number of customers including, India, EMSA, Denmark and others that will drive revenue during Fiscal 2020. As of January 28, 2020, firm order bookings in Q1 2020 totalled approximately $6.6 million. Order bookings will fluctuate on a quarter-to-quarter basis reflecting the timing to complete new customer agreements. Revenue backlog at October 31, 2019 was $22.4 million compared to $31.5 million at the end of Fiscal 2018. Revenue backlog was impacted in 2019 due to the renegotiation of a long-term customer contract in the second quarter. The Company believes that the renegotiation positions it to generate greater levels of revenue on a variable basis over time as compared to a fixed payment schedule.

Gross Margin for the Q4 2019 and Fiscal 2019 periods was nil% and 14% compared to 61% and 34% in the same periods last year. Gross margin decreased for the Q4 2019 and Fiscal 2019 periods due to the increase in cost of revenue, partially offset by higher revenue. Cost of revenue increased due to higher satellite operating costs related to the Second-Generation Constellation and increased terrestrial data costs, partially offset by lower data processing and project-related costs and the SIF operating grants. As stated earlier in this release, Gross Margin is expected to improve in 2020 with the Company having reached agreement on updated terms to its Satellite-AIS Business Agreement with L3Harris.

Selling, general and administrative ("SG&A") expense for the Q4 2019 and Fiscal 2019 periods was $1.8 million and $7.7 million compared to $1.0 million and $6.3 million in the same periods last year. The fiscal year-over-year increase in SG&A was due primarily to a difference in bad debt expense of $525,000, an increase in legal fees, management incentive compensation and long-term incentive plan expense, partially offset by reductions in sales commission, insurance, consulting fees and travel expenses. Bad debt expense in Fiscal 2019 was $215,000, while in Fiscal 2018, the Company had a bad debt recovery of $310,000.

We measure Adjusted EBITDA as earnings before interest, taxes, depreciation and amortization ("EBITDA"), plus offering related expenses, unrealized foreign exchange losses, share-based compensation costs, restructuring costs and impairment losses, less unrealized foreign exchange gains and gains from insurance settlements. We believe that Adjusted EBITDA provides useful supplemental information as it provides an indication of the income generated by our main business activities before taking into consideration how they are financed or taxed and exclude the impact of items that are considered by management to be outside of the Company's ongoing operating results. Adjusted EBITDA should not be construed as an alternative to net income (loss) determined in accordance with IFRS as an indicator of our performance or to cash flows from operating, investing and financing activities as a measure of liquidity and cash flows.

We define Subscription Revenue as the dollar sum of fully executed contracts for our products and/or services to our customers that are subscription-based, typically sold with a one-year period of service and recognized in our "Subscription Services" segmented revenue. 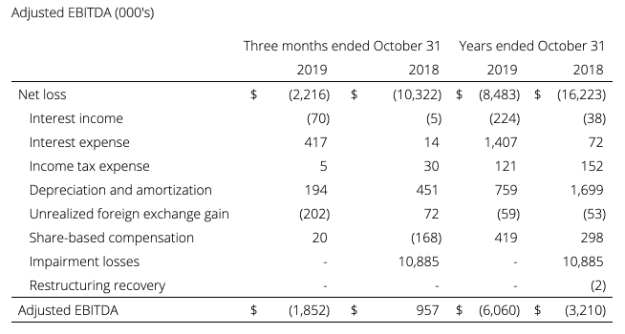 exactEarth is a leading provider of global maritime vessel data for ship tracking and maritime situational awareness solutions. Since its formation in 2009, exactEarth has pioneered a powerful new method of maritime surveillance called Satellite AIS and has delivered to its clients a view of maritime behaviours across all regions of the world's oceans unrestricted by terrestrial limitations. exactEarth's second-generation constellation, exactView RT, securely relays satellite-detected AIS vessel signals from any location on the earth's surface to the ground in seconds – thus enabling global real-time vessel tracking. This unique capability consists of 58 advanced satellite payloads designed and built by L3 Harris Technologies, Inc. under agreement with exactEarth and that are hosted onboard the Iridium NEXT constellation of satellites. www.exactearth.com