Maxar Technologies (NYSE:MAXR) (TSX:MAXR) today announced that it has signed a teaming agreement with Huntsville, Alabama-based Dynetics to support Maxar in building and demonstrating the power and propulsion element for the Gateway − an essential component of NASA’s Artemis lunar exploration program and future expeditions to Mars. The teaming agreement establishes a framework for the companies to work together on the mission, with substantive work being executed by Dynetics in Huntsville, Alabama.

As recently announced, Maxar was selected by NASA to build and perform a spaceflight demonstration of the power and propulsion element spacecraft. The spacecraft is the first element for the NASA-led lunar Gateway, which will play a critical role in ensuring that NASA astronauts can land on the surface of the Moon by 2024 while serving as a vital platform to support future missions to Mars and beyond. The mission is targeted for launch by the end of 2022 and will provide power, maneuvering, attitude control, communications systems and initial docking capabilities for the Gateway.

The agreement enables Dynetics to collaborate with Maxar in the design, manufacturing and operations of Maxar’s power and propulsion element spacecraft. Dynetics has a wide range of capabilities to support Maxar in areas such as propulsion systems, mechanical and propulsion testing, system integration and assembly, and mission operations.

“We’re thrilled to add Dynetics to our team and bring power and propulsion element work to Huntsville. Dynetics has decades of expertise in human space exploration, and will play a critical role in executing the Artemis mission, landing the first woman on the surface of the Moon, and establishing the sustainable space infrastructure that is necessary to explore Mars,” said Mike Gold, Maxar’s Vice President of Civil Space.

“This is an exciting time for lunar exploration. We look for space partners that share our similar core values and are eager to see America return to the Moon. Maxar fills that role and Dynetics is glad to be on the team. Maxar’s power and propulsion element will be a vital element of the lunar Gateway and will aid establishment of a sustainable presence on the Moon. We are looking forward to this partnership and to participating in the development of the lunar architecture here in Huntsville on our campus and in Decatur, Alabama, at our Aerospace Structures Complex,” said Kim Doering, Dynetics vice president for space systems.

The operations of DigitalGlobe, SSL (Space Systems Loral) and Radiant Solutions were unified under the Maxar brand in February; MDA continues to operate as an independent business unit within the Maxar organization. 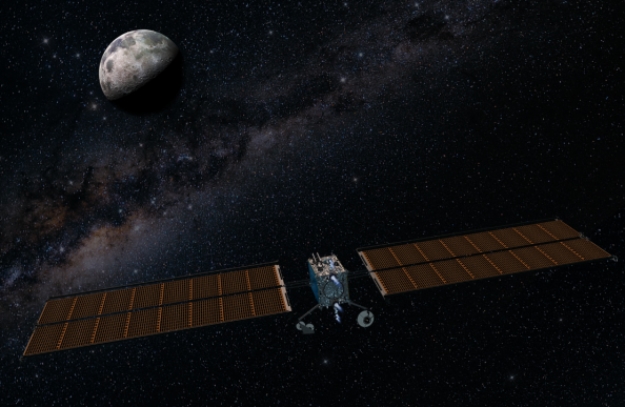 Maxar has signed an agreement to team with Huntsville, Alabama-based Dynetics on the power and propulsion element for the NASA-led Gateway. Credit: Maxar.

As a global leader of advanced space technology solutions, Maxar is at the nexus of the new space economy, developing and sustaining the infrastructure and delivering the information, services, systems that unlock the promise of space for commercial and government markets. The operations of DigitalGlobe, SSL (Space Systems Loral) and Radiant Solutions were unified under the Maxar brand in February; MDA continues to operate as an independent business unit within the Maxar organization. As a trusted partner with 5,900 employees in over 30 global locations, Maxar provides vertically integrated capabilities and expertise including satellites, Earth imagery, robotics, advanced propulsion systems, geospatial data and analytics to help customers anticipate and address their most complex mission-critical challenges with confidence. Every day, billions of people rely on Maxar to communicate, share information and data, and deliver insights that Build a Better World. Maxar trades on the New York Stock Exchange and Toronto Stock Exchange as MAXR. For more information, visit www.maxar.com.

Dynetics provides responsive, cost-effective engineering, scientific, IT solutions to the national security, cybersecurity, space, and critical infrastructure sectors. Our portfolio features highly specialized technical services and a range of software and hardware products, including components, subsystems, and complex end-to-end systems. The company of more than 2,000 employee-owners is based in Huntsville, Ala., and has offices throughout the U.S. For more information, visit www.dynetics.com.