“The innovation and technology that we created is a major contributor to this important mission,” said RUAG Space CEO Peter Guggenbach. RCM is the next in a series of Canadian RADARSAT satellites supporting all-weather maritime surveillance, disaster management and ecosystem monitoring for the Canadian government and international users. “We are very honoured that MDA came to RUAG Space for this fundamental hardware for this mission for the Canadian Space Agency which will also serve the rest of the world,” said Jörgen Remmelg, Senior Vice President for Spacecraft at RUAG Space. “Space assets will bring more services, better environments, more science, and better telecommunications.” 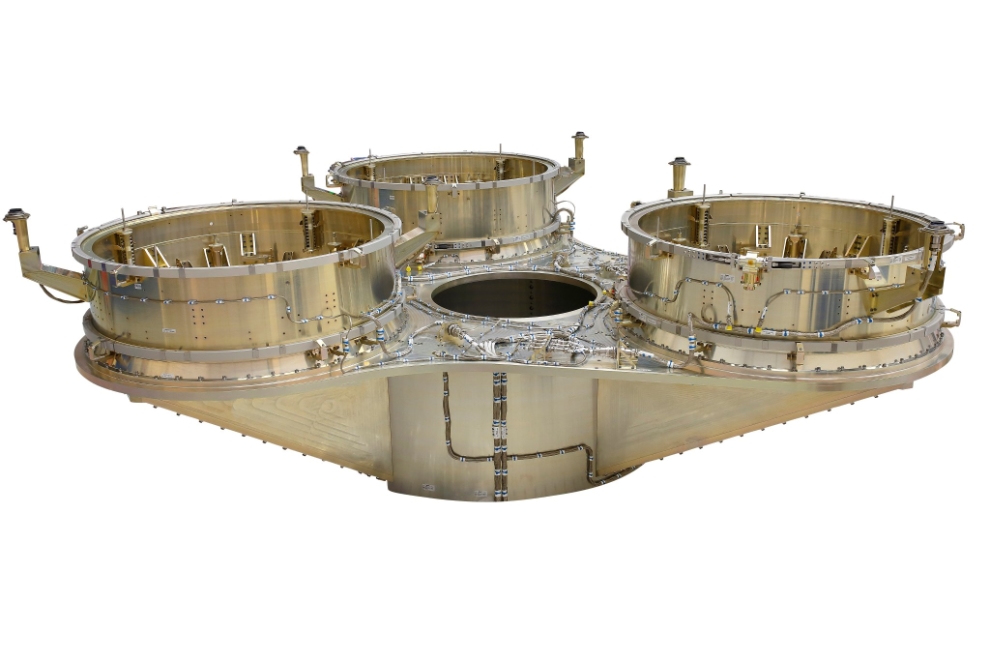 RUAG was contacted back in 2015 to solve the difficult issue of how to get three large spacecraft safely launched on a single launcher. The size of the spacecraft, and having to pack them inside the payload faring of the launcher, meant that they would sit very close to each other.

To solve this issue, RUAG in Linköping, Sweden put forward a truly unique concept for a platform Dispenser to where the three spacecraft would tilt outwards from each other before separation, providing significantly more room for the satellites to safely deploy. “This tilting method was never attempted until today,” explains Jörgen Remmelg. “We accomplished this task using this state-of-the-art tilting mechanism and our extensive heritage in the field of satellite separations.” Although this tilting method is new, the mechanism incorporated components and design concepts from RUAG’s existing and extensive product portfolio, ensuring a high level of reliability and winning the confidence of the stakeholders for 100% mission success.

When it comes to spacecraft separation, RUAG has 100 percent success rate and to design a space mechanism in less than a year is a big challenge. To reduce risk, RUAG Space based the design on existing parts, had healthy margins in the design, and redundancy where possible.

Albert Thuswaldner, project manager for the RCM Dispenser at RUAG Space said, “In less than two years, we went from having a concept to a complete product. We were very pleased and proud to see our dispenser development efforts pay off. This is a very big step into our future successes.”

Following an intense and highly successful two-year development and qualification program, the RUAG Dispenser system was delivered to the customer in Q2 2017. RUAG continued to actively support the customer, including performing the onsite installation of the dispenser on to the launcher rocket.

RUAG Space is a global expert in satellite separations using payload adapter systems, dispensers and separation systems. Our products are used for major commercial and institutional launches in the U.S. and Europe, with more than 660 separations and 100% success rate to date. RUAG Space has been expanding its business in the Dispenser systems market in recent years, delivering dispensers to major flagship constellations programs.

RUAG Space is the leading supplier to the space industry in Europe, with a growing presence in the United States. With more than 1,300 staff across six countries, it develops and manufactures products for satellites and launch vehicles – playing a key role both in the institutional and commercial space market. RUAG Space is a division of the international technology Group RUAG. RUAG develops and markets internationally sought-after technology applications in the fields of aerospace and defense for use on land, in the air and in space. RUAG generates sales of approximately CHF 1.99 billion and has over 9,100 employees – 400 of whom are trainees. Visit www.ruag.com/space.