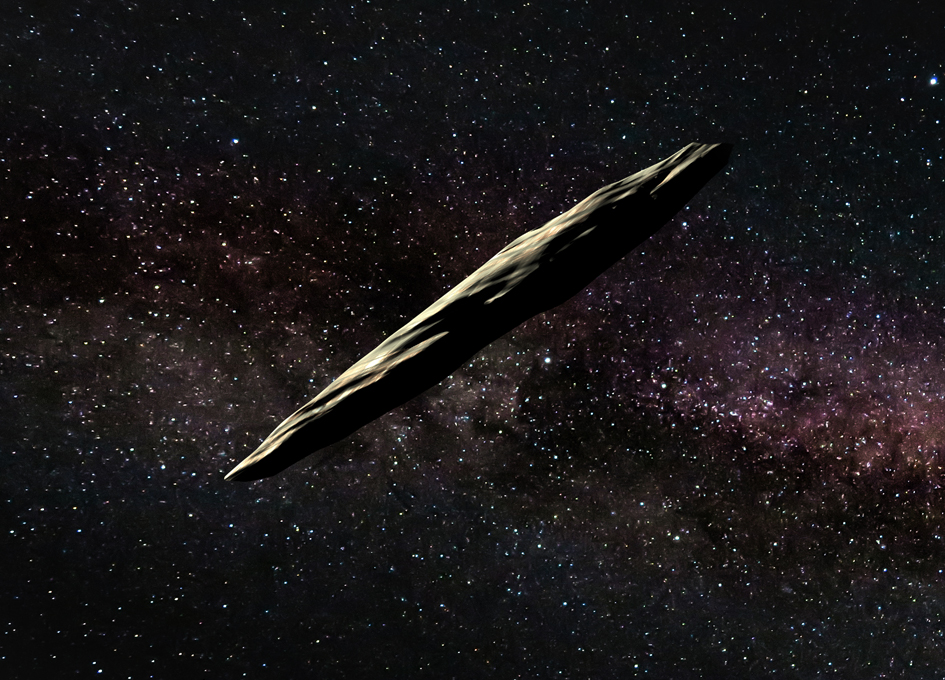 In October, astronomers at the University of Hawaii’s Institute for Astronomy (IfA) made a stunning discovery with the Pan-STARRS1 telescope -- the first interstellar object seen passing through our solar system. Now, an international team lead by Karen Meech (IfA) has made detailed measurements of the visitor’s properties. “This thing is very strange,” said Karen Meech.

Originally denoted A/2017 U1 (with the A for “asteroid”), the body is now the first to receive an “I” (for interstellar) designation from the International Astronomical Union, which created the new category after the discovery. In addition, it has been officially given the name `Oumuamua. The name, which was chosen in consultation with Hawaiian language experts Ka`iu Kimura and Larry Kimura, reflects the way this object is like a scout or messenger sent from the distant past to reach out to us (`ou means “reach out for,” and mua, with the second mua placing emphasis, means “first, in advance of”). The object’s full official name is 1I/2017 U1 (`Oumuamua), and can also be correctly referred to as 1I, 1I/2017 U1, and 1I/`Oumuamua

`Oumuamua is rapidly fading as it heads out of the solar system and recedes from both the Sun and the Earth, so getting new observations as fast as possible was crucial. The IfA team -- including those who discovered 1I -- was already prepared to rapidly follow up solar system discoveries from Pan-STARRS, which is operated by the IfA and funded by NASA. “We were able to rapidly develop a follow-up strategy on a very short timescale. It is exciting to think that the brief visit by `Oumuamua gave us the opportunity to do the first characterization of a sample from another solar system,” says Meech. As a result, they are the first to publish their results, appearing in the November 20th online issue of the journal Nature.

The team gathered data from telescopes around the world, including the Canada-France-Hawaii Telescope (CFHT), the United Kingdom Infrared Telescope (UKIRT) and the Keck Telescope on Maunakea, the Gemini South telescope, and the European Southern Observatory (ESO) Very Large Telescope (VLT) in Chile. Marshaling all of these resources yielded a wealth of data that revealed `Oumuamua’s unusual nature.

“We had to act quickly,” explains team member Olivier Hainaut from ESO in Garching, Germany. “`Oumuamua had already passed its closest point to the Sun and was heading back into interstellar space. This felt very much like the beginning of the famous science fiction story, Rendezvous with Rama.”

“Needless to say, we dropped everything so we could quickly point the Gemini telescopes at this object immediately after its discovery,” said Gemini Director Laura Ferrarese, who coordinated the Gemini South observations for Meech’s group.

“The CFHT data was absolutely critical for understanding the light curve, for our initial understanding of the orbit, and determining that this object was more like an asteroid and not a comet,” noted IfA’s Richard Wainscoat.

“An axis ratio like that is truly extraordinary -- we have never seen anything in the solar system that is this elongated,” says Lance Benner, a specialist in radar imaging of near-Earth and main-belt asteroids at the Jet Propulsion Laboratory in California.

`Oumuamua does have some similarities to small objects in the outer solar system, especially the distant worlds of the Kuiper Belt -- a region of rocky, frigid worlds far beyond Neptune. “While study of `Oumuamua’s colors shows that this body shares characteristics with both Kuiper Belt objects and organic-rich comets and Trojan asteroids,” said Meech, “its hyperbolic orbit says it comes from far beyond.”

“We are continuing to observe this unique object,” added Hainaut, “and we hope to more accurately pin down where it came from and where it is going next on its tour of the galaxy. And now that we have found the first interstellar rock, we are getting ready for the next ones!”

Astronomers estimate that an interstellar asteroid similar to `Oumuamua passes inside the orbit of Earth several times a year, but they are faint and hard to spot, so they have been missed up until now. It is only recently that survey telescopes, such as Pan-STARRS, are powerful enough to have a chance to discover them. “Our successful follow-up observations are a model for the future -- especially when the next major survey telescope, LSST, comes on line,” added Meech.

Founded in 1967, the Institute for Astronomy at the University of Hawaii at Manoa conducts research into galaxies, cosmology, stars, planets, and the sun. Its faculty and staff are also involved in astronomy education, deep space missions, and in the development and management of the observatories on Haleakala and Maunakea. The Institute operates facilities on the islands of Oahu, Maui, and Hawaii.