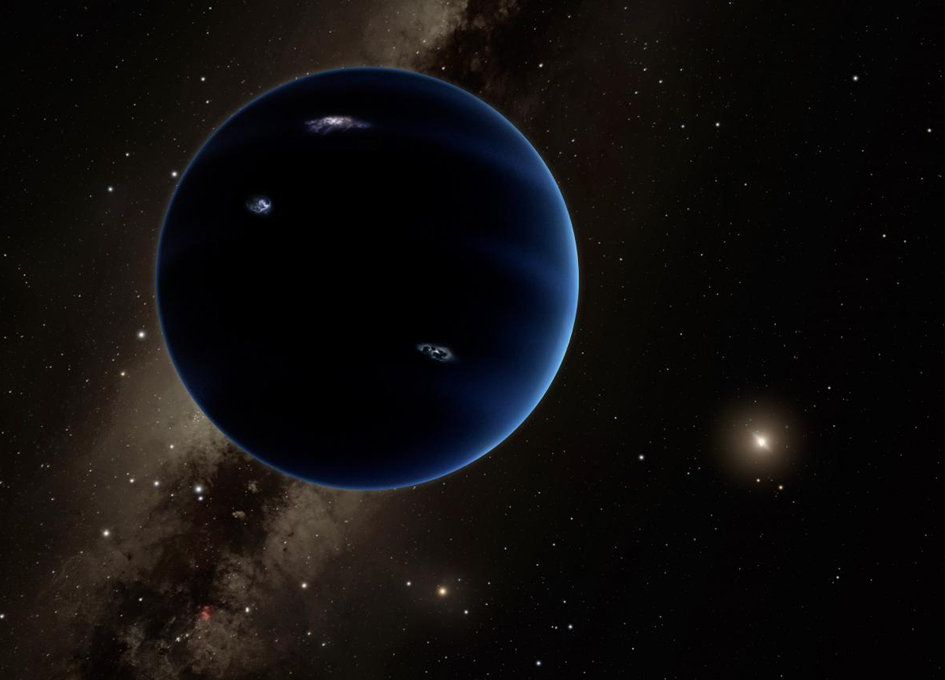 As the search for a hypothetical, unseen planet far, far beyond Neptune's orbit continues, research by a team of the University of Arizona provides additional support for the possible existence of such a world and narrows the range of its parameters and location.

Led by Renu Malhotra, a Regents' Professor of Planetary Sciences in the UA's Lunar and Planetary Lab, the team found that the four Kuiper Belt Objects with the longest known orbital periods revolve around the Sun in patterns most readily explained by the presence of a hypothetical "Planet Nine" approximately ten times the mass of Earth. Malhotra is presenting the results at the joint 48th meeting of the Division for Planetary Sciences of the American Astronomical Society and 11th European Planetary Science Congress in Pasadena, California.

According to the researchers' calculations, such a hypothetical planet would complete one orbit around the Sun roughly every 17,000 years and, at its farthest point from our central star, it would swing out more than 660 astronomical units, with one AU being the average distance between the Earth and the Sun.

Scientists think that objects in the Kuiper Belt, a vast region of dwarf planets and icy rocks populating the fringes of our solar system beyond the orbit of Neptune, dance mostly to the tune of the giant planets, Saturn, Jupiter, Uranus and Neptune, influenced by their gravity either directly or indirectly.

However, there are a few known Kuiper Belt objects (KBOs) that are unlikely to be significantly perturbed by the known giant planets in their current orbits. Referred to as "extreme KBOs" (eKBOs) by the authors, all of these have extremely large orbital eccentricities, in other words, they get very close to the Sun at one point on their orbital journey, only to swing far out into space once they pass the Sun, on long elliptical orbits that take these strange mini worlds hundreds of AUs away from the Sun.

"We analyzed the data of these most distant Kuiper Belt objects," Malhotra said, "and noticed something peculiar, suggesting they were in some kind of resonances with an unseen planet."

In their paper, "Corralling a Distant Planet with Extreme Resonant Kuiper Belt Objects," Malhotra and her co-authors, Kathryn Volk and Xianyu Wang, point out peculiarities of the orbits of the extreme KBOs that went unnoticed until now: they found that the orbital period ratios of these objects are close to ratios of small whole numbers. An example of this would be one KBO traveling around the Sun once while another takes twice as long, or three times as long, or four times as long etc., but not, say, 2.7 times as long.

According to the authors, such ratios could arise most naturally if the extreme KBOs' orbital periods are in small whole number ratios with a massive planet, which would help to stabilize the highly elliptical orbits of eKBOs.

The findings bolster previous work by other scientists that showed that six of those bodies travel on highly eccentric orbits whose long axes all point in the same direction. This clustering of orbital parameters of the most distant KBOs suggested a large, planetary size body shepherding their orbits.

Another paper published earlier this year presented the results of numerical simulations providing a range of possibilities for the mass and orbit for such a hypothetical planet, that could account for the observed clustering of eKBO orbits.

"Our paper provides more specific estimates for the mass and orbit that this planet would have, and, more importantly, constraints on its current position within its orbit," Malhotra said.

While the results provide additional support for the idea of a potential "Planet Nine" and lay out possible scenarios, the authors stress that their paper should not be considered definitive proof of the planet's existence.

For one, the very far and faint KBOs haven't been observed for very long, and given their minuscule apparent motion along their immensely long journeys around the Sun, the estimates for their closeness to whole number ratios of orbital periods come with uncertainties that can be narrowed down only through more observations.

The authors also note that the long orbital timescales in this region of the outer solar system may allow formally unstable orbits to persist for very long times, possibly even to the age of the solar system, without the help of orbital resonances. In this scenario, orbits whose orderly parameters appear as testimony to the stabilizing influence of an unseen planet may in fact be in the process of deterioration but haven't been observed long enough for it to show.

Future observations and studies into the dynamical lifetimes of non-resonant planet-crossing orbits in the far regions of the outer solar system could help to further test the case for the existence and whereabouts of a ninth planet, Malhotra and her co-authors write.