Researchers using the Atacama Large Millimeter/submillimeter Array (ALMA) have discovered a rotating ring containing large organic molecules around a protostar. This observation definitively shows that organic materials formed in interstellar space are brought into the planet-forming region. Researchers also found that the molecular species brought into the planet-forming region vary from one protostar to another. Chemical composition is a new way to answer the long-standing question of whether or not the Solar System is a typical example of a planetary system.

Astronomers have long known that organic molecules form in diffuse gas clouds floating between stars. It is thought that as the Solar System formed 4.6 billion years ago, some of these organic molecules were transported from interstellar space to the planet forming disk. Later, these molecules played important roles in the chemical evolution resulting in the emergence of life on the Earth. However, it is still unknown what kinds and quantities of organic molecules were actually supplied from interstellar space. Although radio astronomy observations during the last decade showed that saturated complex organic molecules, such as methanol (CH3OH) and methyl formate (HCOOCH3) [1], exist around Solar-type protostars, their distributions were too compact to be resolved with the radio telescopes available at the time.

With ALMA, an international team lead by Yoko Oya, a graduate student of Department of Physics, The University of Tokyo, and Nami Sakai, an associate chief scientist of RIKEN, studied the distribution of various organic molecules around a Solar-type protostar IRAS 16293-2422A at a high spatial resolution. They discovered a ring structure of complex organic molecules around the protostar. The radius of the ring is 50 times wider than the Earth's orbit. This size is comparable to the size of the Solar System, and the ring structure most likely represents the boundary region between infalling gas and a rotating disk structure around the protostar. 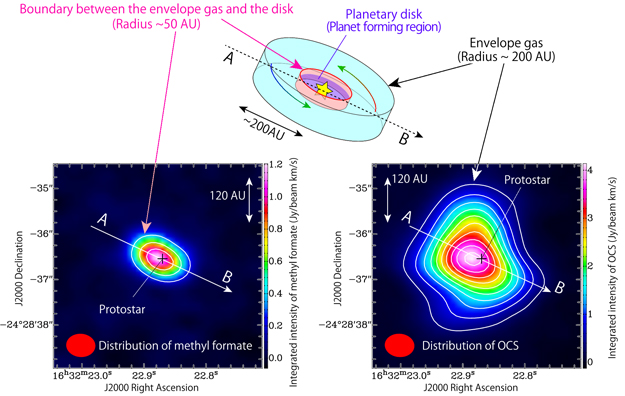 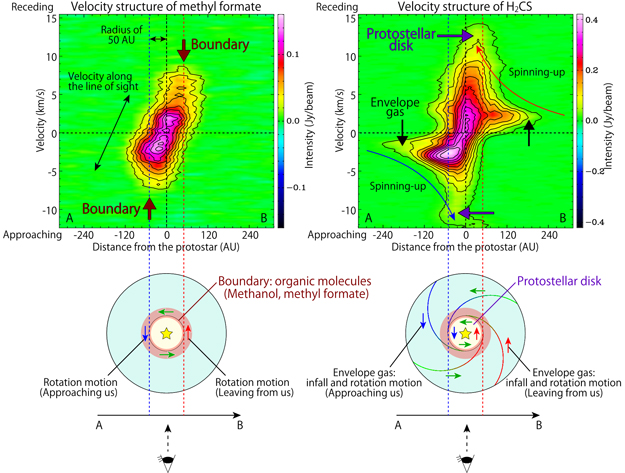 Figure 2. (Upper Left) Velocity structure of methyl formate observed along the A-B axis. The abscissa is the position along the A-B axis shown in Figure 1, while the ordinate is the line-of-sight velocity of methyl formate. Positive velocity means that the gas is going away from the observer, while negative velocity means that the gas is approaching the observer. The velocity on the A side is the opposite of that on the B side.  (Lower Left) The above features can be interpreted as the rotating ring shown here schematically. Based on molecular velocity information, methyl formate is found to exist in the rotating ring. The size of the ring is about 50 AU, which corresponds to the boundary between the infalling gas and the disk structure. (Upper Right) Velocity structure of H2CS (thioformaldehyde) observed along the A-B axis shown in

Figure 1. The H2CS emission is seen farther away from the protostar than the methyl formate emission, indicating its existence in the infalling gas. The velocity increases as it approaches the protostar. Furthermore, the emission is also visible within the ring boundary, and the velocity is higher than that observed for methyl formate.  (Lower Right) A schematic illustration of the distribution of H2CS. Both the infalling gas and the disk structure can be seen. Credit: ALMA (ESO/NAOJ/NRAO), Oya et al.

These saturated organic molecules are formed in interstellar space and are preserved on the surfaces of dust grains. Around the outer boundary of the disk structure, they evaporate due to shock generated by collisions of the disk and infalling material, and/or due to heating by the light from the baby star. This result is the first direct evidence that interstellar organic materials are indeed fed into the rotating disk structure that eventually forms a planetary system.

In 2014, the team found a similar ring structure of SO (sulfur monoxide) around another Solar-type protostar L1527. In this source, unsaturated complex organic molecules such as CCH and cyclic-C3H2 are very abundant in the infalling gas, while SO preferentially exists in the boundary between the infalling gas and the disk structure. Although the physical structure in L1527 is similar to that found in IRAS 16293-2422A, the chemical composition is much different. Saturated complex organic molecules are almost completely absent in L1527. The present result, taken together with previous results on L1527, clearly demonstrates for the first time that the materials delivered to a planetary system differ from star to star. A new perspective on chemical composition is thus indispensable for a thorough understanding of the origin of the Solar System and the origin of life on the Earth.

These observation results were published as Oya et al. "Infalling-Rotating Motion and Associated Chemical Change in the Envelope of IRAS 16293-2422 Source A Studied with ALMA" in the Astrophysical Journal issued on 20 June 2016.

The research team members are:

The Atacama Large Millimeter/submillimeter Array (ALMA), an international astronomy facility, is a partnership of the European Organisation for Astronomical Research in the Southern Hemisphere (ESO), the U.S. National Science Foundation (NSF) and the National Institutes of Natural Sciences (NINS) of Japan in cooperation with the Republic of Chile. ALMA is funded by ESO on behalf of its Member States, by NSF in cooperation with the National Research Council of Canada (NRC) and the National Science Council of Taiwan (NSC) and by NINS in cooperation with the Academia Sinica (AS) in Taiwan and the Korea Astronomy and Space Science Institute (KASI). ALMA construction and operations are led by ESO on behalf of its Member States; by the National Radio Astronomy Observatory (NRAO), managed by Associated Universities, Inc. (AUI), on behalf of North America; and by the National Astronomical Observatory of Japan (NAOJ) on behalf of East Asia. The Joint ALMA Observatory (JAO) provides the unified leadership and management of the construction, commissioning and operation of ALMA. 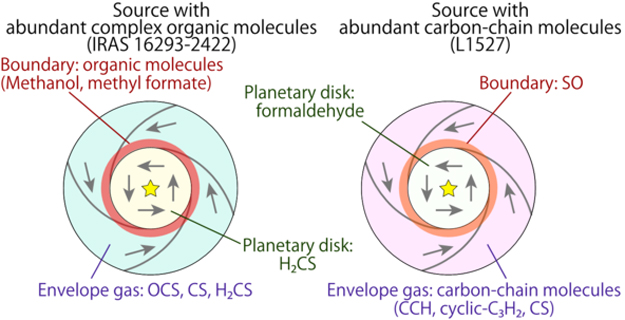