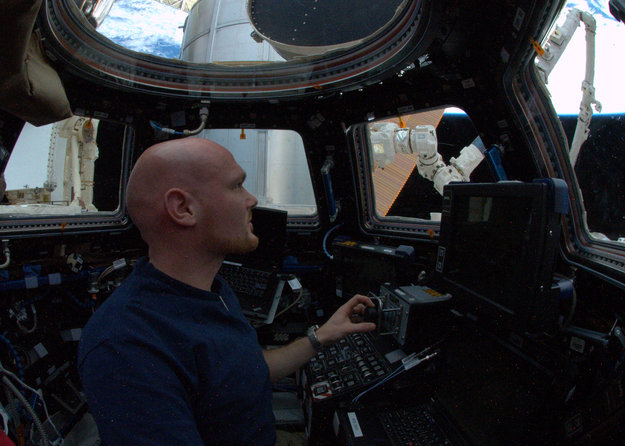 ESA astronaut Alexander Gerst has been assigned a new mission to the International Space Station, where he will fulfil the role of commander during the second part of his six-month mission in 2018.

The news was announced today in the presence of German Chancellor Angela Merkel by ESA Director General Jan Woerner at the European Astronaut Centre in Cologne, Germany.

Alexander worked on the Station for six months on his Blue Dot mission in 2014. The German astronaut commented:

“I am humbled by receiving the honour to command the International Space Station. This international sign of trust reflects ESA's reliability as a cooperation partner, and was made possible by the fantastic work of my European colleagues on their previous missions. I am delighted by the prospect of continuing the scientific work that has been conducted on the ISS for many years. I am particularly looking forward to contributing to one of humanity's greatest exploration adventures: discovering new horizons.

Eleven European countries participate in the Station through ESA together with USA, Russia, Japan and Canada. ESA astronaut Tim Peake is currently working on the Station, to be followed by Thomas Pesquet in November.

This is the second time a European astronaut will be commander of the Station in the 15 years it has been occupied – the first was Frank De Winne in 2009. Now heading the European Astronaut Centre, Frank noted, “Alexander showed outstanding performance, high professionalism and excellent interaction skills during his Blue Dot mission.

“For these reasons, the European Astronaut Centre proposed to the international partners that Alexander be the commander of the Space Station.”

Alexander’s second mission will run from May to November 2018 as part of Expeditions 56 and 57. He will be commander during the second part of his stay, during Expedition 57.

Alexander joined the ESA astronaut corps in 2009 and was assigned his first mission in 2011. He was awarded Germany’s Order of Merit on return from his 166 days in space in 2014.