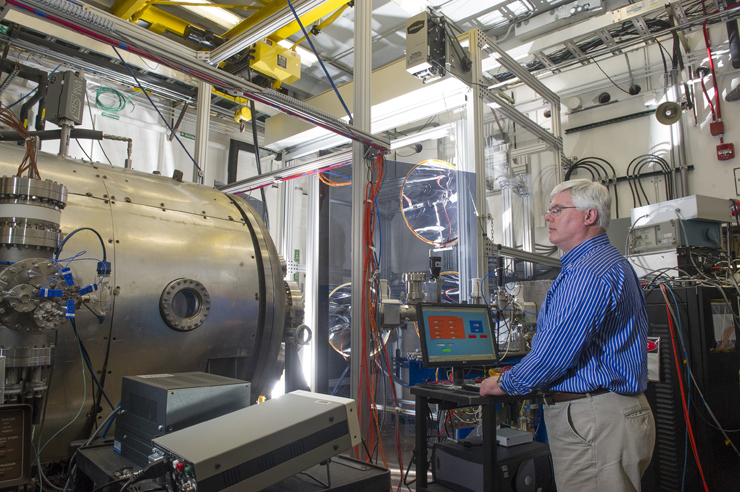 Inside inconspicuous Building 4605 at NASA's Marshall Space Flight Center in Huntsville, Alabama, Todd Schneider is preparing to switch on the sun.

He moves surely in a laboratory crowded by computers and instruments, along short alleys of racks and gear that surround the High Intensity Solar Environment Test system, or HISET. The heavy steel door on the HISET chamber is a doorway to space: This is the only place on Earth where spacecraft systems and materials can, at the same time, be subjected to the vacuum, temperatures, solar photons and to the electrons and protons of solar winds like they will encounter in space.

"Space doesn't just throw one thing at you at a time and let you deal with it," says Schneider, a physicist in the Environmental Effects Branch of Marshall's Materials and Processes laboratory. "Space throws heat, it throws cold, it throws radiation, UV, plasma and more, all at one time. And there are synergistic effects."

Today, he and his team are preparing HISET for an upcoming test.

"Turn on master power," he says into a handheld radio, and someone in a nearby control room throws the switch. The hum of three power supplies begins rising in the lab, along with the whoosh of cooling fans and rushing air. Each is connected to a pressurized xenon arc lamp.

Schneider stands at a computer behind a smoked gray polycarbonate shield on the side of the metal "cage" holding the lights. He makes few keystrokes then, with the click of a mouse on the screen, there is a loud "CRACK!" and a brilliant flash as electricity is sent to the arc lamps. Another crackle and flash, and then another, and the HISET chamber suddenly seems almost to disappear into the intense, continuous brightness.

HISET's door is outfitted with thick glass ports to let in light from the arc lamps or other sources. Researchers can place a test object inside the 4-by-8-foot, cryogenically cooled vacuum chamber, seal it and then focus carefully controlled "sunlight" and charged particles on the object as though it were in orbit around Earth, or Mercury, or Mars; as though it were traveling near the dim, cold edge of the solar system or nearing the blazing corona of the sun itself.

"Our team is all about simulating the space environment on the ground," says Schneider, shutting down the lights. He works among NASA experts in ultraviolet, visible and infrared radiation, charged particles, the dust of lunar and other extraterrestrial environments such as Mars, the impact of micrometeoroids and orbital debris -- everything that astronauts or equipment will encounter traveling in space, which is anything but empty.

Schneider is the principal investigator for HISET, which was created in part to test components of a Solar Wind Electrons Alphas and Protons sensor package for NASA's Solar Probe Plus. That mission, planned for launch in 2018, will send a spacecraft closer to the sun than ever before -- within about 3.9 million miles. The instrument payload must endure heat of about 2,500 degrees Fahrenheit (about 1,400 degrees Celsius) as well as streams of charged particles and blasts of radiation as it sends information back to Earth.

HISET's unique capabilities are already being put to many other uses, including materials testing for the Lightweight Integrated Solar Array and Transceiver project at Marshall. LISA-T is a thin-film solar cell and antenna structure that would be stowed for launch and deployed in orbit to provide power and communication for small satellites without the need for solar tracking systems.

The NASA space environment expertise assembled here is used by the Department of Defense and other federal agencies; the Smithsonian Astrophysical Laboratory and other research organizations; and for commercial aerospace interests, such as makers of communications or other satellites. Schneider said that at any given time as much as half their testing is for commercial customers.

On the same day Schneider was working with HISET, a plasma chamber was being set up elsewhere in the building to test tether-plasma interactions for the Heliopause Electrostatic Rapid Transit System, or HERTS, also in development at Marshall. HERTS is a propellant-less concept that uses solar wind and an array of charged wires extending 20 kilometers (nearly 12.5 miles) outward from a spacecraft for propulsion.

The Space Environmental Effects team here also tests metals and materials used on the International Space Station, helping make it possible for a series of crews to live and work aboard the orbital laboratory continuously over the last 15 years -- experience that is helping develop the knowledge and systems needed for astronauts to explore deep space and make our journey to Mars a reality.

"This is a one-stop shop for a whole suite of research," Schneider says. "There is a wide, wide array of test capabilities here within a five-block radius."

Many of the materials, instruments, components and spacecraft being tested are fragile to begin with, he said, and become more so as they are subjected to the radiation, temperatures and other conditions of simulated space. The less travel required for rounds of testing, the better for high-fidelity results, schedules and budgets.