OneWeb Satellites, a joint venture between Airbus Defence and Space and OneWeb, has chosen Florida in the United States as the site for its final assembly line, completing the last step in its industrial organisation. This facility, located at Florida’s Exploration Park, near the Kennedy Space Center, will carry out the series production of nearly 900 satellites for the OneWeb constellation. 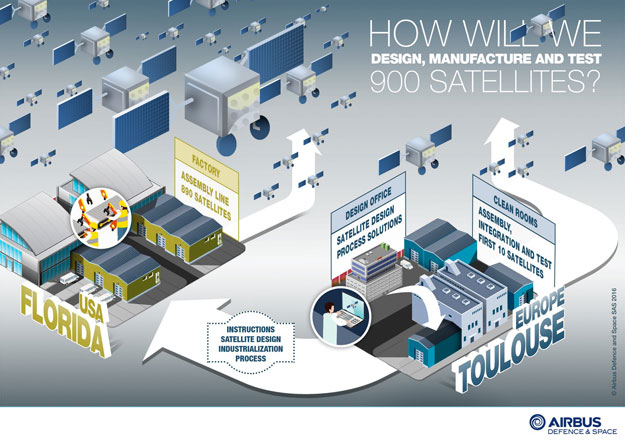 “In June 2015, we started from scratch to create a new satellite design and manufacturing company,” stated François Auque, Head of Space Systems. “In both Florida and Europe, we are now embarking on the next stage of an unprecedented venture in the space industry: a site that can mass-produce dozens of satellites every month. All this, of course, without affecting the levels of quality and technology that are essential when it comes to spacecraft – complex machines that need to operate for several years in space.”

The choice of Florida for the final assembly line follows the announcement of the creation of OneWeb Satellites in January 2016. The production site will cover an area of 100,000+ square feet and will create nearly 250 direct jobs.

A prototype production line at Airbus Defence and Space in Toulouse (France) will assemble and test the first 10 satellites, and check and validate industrial solutions for the series production. The design of the satellites is currently under way in the company’s design offices in Toulouse.

The space segment of OneWeb will comprise initially a constellation of 648 operational satellites and replacement satellites, all of which will be identical. Each satellite will weigh approximately 150 kg and will operate in low Earth orbit. Arianespace and Virgin Galactic will begin launching the spacecraft in 2018 and the satellites will be placed in orbit using electrical propulsion.

About Airbus Defence and Space

Airbus Defence and Space, a division of Airbus Group, is Europe’s number one defence and space enterprise and the second largest space business worldwide. Its activities include space, military aircraft and related systems and services. It employs more than 38,000 people and in 2015 generated revenues of over 13 billion Euros.