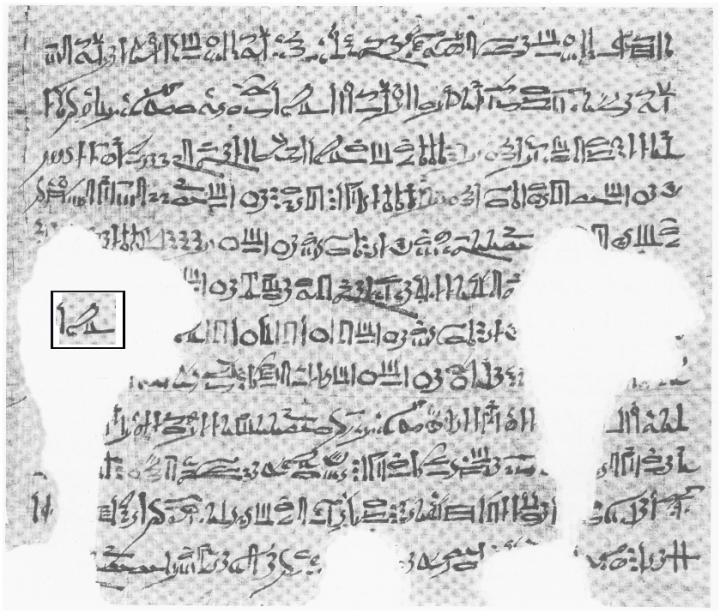 Inside the superimposed rectangle is the hieratic writing for the word 'Horus'.

Their analysis revealed that the periods of Algol (2.85 days) and the Moon (29.6 days) strongly regulate the actions of deities in this calendar.

- Until now, there were only conjectures that many of the mythological texts of the Cairo Calendar describe astronomical phenomena. We can now unambiguously ascertain that throughout the whole year the actions of many deities in the Cairo Calendar are connected to the regular changes of Algol and the Moon, says Master of Science Sebastian Porceddu.

This research confirms that the first variable star, as well as its period, were discovered much earlier than was previously thought. These two "classical" milestones in the history of natural sciences need to be shifted three millennia backwards in time to 1244 - 1163 BC.

This also confirms the two "modern" astrophysical results reported by the Helsinki group in the year 2013: The first direct observation ever of the expected increase of Algol's period and the accurate long--term estimate for the mass transfer in this binary system.

- I would have serious doubts, if someone claimed, for example, that the Bible contains information about water in Mars. We claimed that Ancient Egyptian religious texts contain astrophysical information about Algol. It was no surprise to us that there were, and there still are, sceptics, says docent Lauri Jetsu.

The research also confirms that the brightest phases of Algol and the Moon had particularly positive meanings for the Ancient Egyptians.

This research "Shifting Milestones of Natural Sciences: The Ancient Egyptian Discovery of Algol's Period Confirmed", L. Jetsu and S. Porceddu was published on December, 17th, 2015 in PLOS ONE

Figure caption: One page of the Cairo Calendar. Inside the superimposed rectangle is the hieratic writing for the word "Horus'".