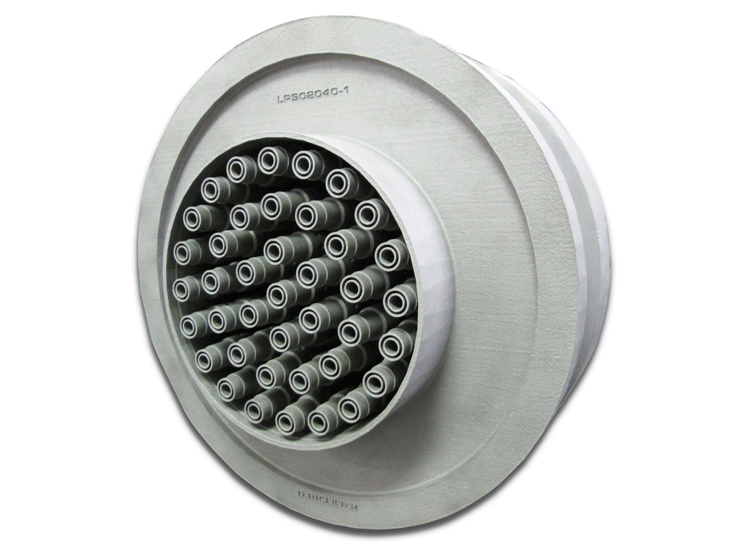 NASA's Marshall Space Flight Center began operations in 1960, pioneering space exploration and rocket advancements for travel to the moon, space shuttle propulsion and many NASA legacy missions including supporting the International Space Station operations, all the Apollo missions, the Hubble Space Telescope and Chandra X-ray Observatory. Marshall is currently leading the development of NASA's Space Launch System (SLS) program, which is building a heavy-lift launch vehicle to carry human explorers and science payloads to new frontiers. Today, one important technology being explored by the team at Marshall Space Flight Center is additive manufacturing, or 3D printing, as it relates to manufacturing hardware and propulsion for NASA's SLS rocket.

The center dedicated resources to materials and technologies research, using their latest liquid rocket injector development as one optimal project for testing out the capabilities, costs and benefits of additive manufacturing processes. One goal of additive manufacturing is to consolidate parts to reduce labor and weight and create an overall more efficient part with increased complexities that help optimize injectors for future applications. Overall, the Marshall team is exploring how this advanced manufacturing process might replace or enhance current manufacturing methods for faster, more cost-effective production.

Direct Metal Laser Sintering (DMLS) is an additive process that uses many of the same metals the aerospace and medical industries rely heavily upon. Titanium, Inconel, stainless steel, cobalt chrome and aluminum are all metals that can be built up, layer by layer, with this 3D printing technology. Despite decades of development behind this particular additive process, its true viability is only just being tested by major aerospace players such as NASA, GE Aviation, Space-X to discover what it is capable of and what is not.

Marshall Space Flight Center required 3D printing to execute their hydrogen-oxygen injector due to the complicated internal design. There are three basic conventional methods used to create the flow pattern within injector inlets. Traditionally, manufacturing methods would require holes drilled into each element of the inlet. A fitting would be machined with unique flow features and then welded to the first element. This method required multiple pieces to be welded, machined, cast and otherwise bonded together to create the injector. DMLS allowed the complicated, unique swirl pattern to be built directly into the inlet of the injector in one singular print or build. Prior to utilizing DMLS, the injector was a less complex part manufactured through casting and other machined units. Manufacturing the injector the traditional way took six to nine months to make. Stratasys Direct Manufacturing worked to combine features and incorporate complexity for more efficiency and still deliver the part faster. What began as a 150+ individual pieces unit that required months to manufacture was transformed into a two-part 3D printed unit that eliminated extensive touch labor and could build in 10 days.

Parallel to 3D printing injector components, Marshall conducted materials research to determine the success of DMLS metal units when subjected to stressful environments. Phillip Conner, DMLS Manager with Stratasys Direct Manufacturing, confirmed that across the board DMLS parts will exhibit stronger mechanical properties than cast parts. "When you're evaluating a part cut from a solid chunk of metal to a cast part, the cast part will always have less strength," explains Conner. "But DMLS parts are typically only 5 10% less strong than cut metal, which means DMLS is consistently stronger than cast parts."

One of the challenges of 3D printing a metal part for an injector on a rocket is there isn't currently precedence for this process in this application. At the forefront of the project has been the evaluation of metal additive manufacturing consistency and repeatability from one completed part to the next compared to conventional manufacturing. Controlling repeatability falls to the hands of the 3D printing service provider. "Before attempting the injector we built half a dozen different parts to show the interior complexities and allow for extensive mechanical property testing," says Conner. The results helped to both accelerate development for the injector and provide insight to Stratasys Direct Manufacturing on optimal designs and materials for similar applications.

The current benefits of DMLS don't necessarily equate to revamping the entire production line, however; a simple part without these complicated interior features would be perfect for traditional manufacturing. Metal additive manufacturing excels with challenging units that's where it positively impacts product cost, time and labor, by cutting these elements in half and resulting in more efficient production development and parts. Generally, the response to the project has been very encouraging with excitement over what the success of this project might mean across a range of industries.

The DMLS injectors underwent hot fire testing in August and continue to undergo evaluations as the Marshall teams expand into the additive manufacturing territory. In other areas of the Space Launch Systems program, Marshall recently unveiled the largest, most powerful solid rocket booster ever built for a NASA rocket. It underwent a two-minute static test on March 11, 2015. The SLS program continuously breaks ground on incredible milestones for rockets, science and the future of space exploration.