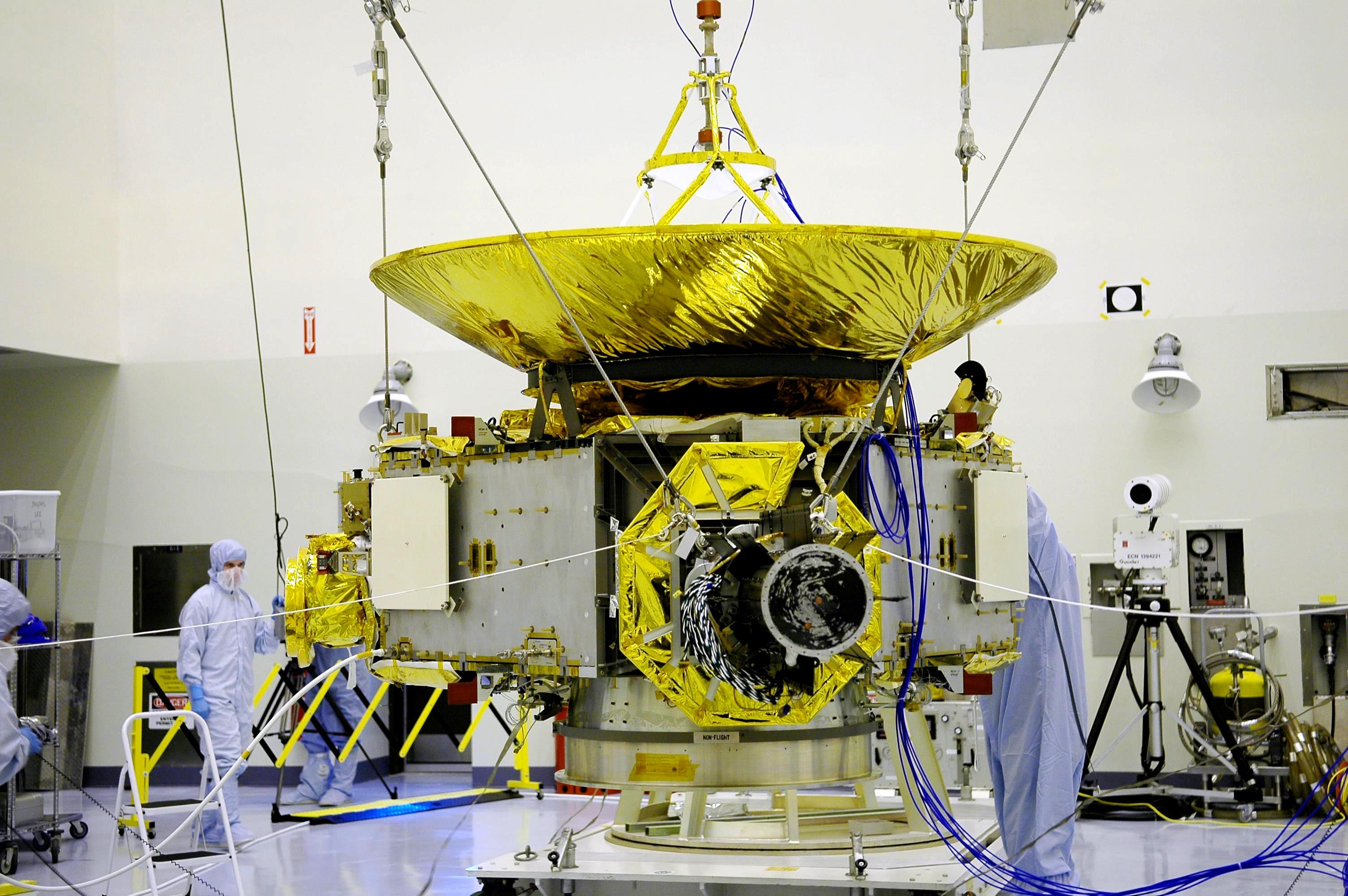 NASA's New Horizons mission presented challenges like no other, but its goal also was unprecedented. The spacecraft will soon begin a study of the farthest reaches of the solar system. It was an historic journey of over 3.6 billion miles that began at the agency's Florida spaceport.

Plans call for New Horizons to send the first-ever, close-up images and scientific observations of distant Pluto, its system of large and small moons, and the Kuiper Belt. A region of the solar system beyond the planets, the Kuiper Belt consists mainly of small planetary bodies.

To reach its primary target, the New Horizons spacecraft has traveled farther away and a longer time -- more than nine years -- than any previous space mission. The flight through the Pluto system is planned to begin July 14, 2015. It will complete the initial reconnaissance of the classical solar system, expanding the frontiers of knowledge, capability and opportunity in space.

"Traveling as far away from the sun as New Horizons did, means solar panels are useless," he said. "Batteries and fuel cells also wouldn't work due to the length of the mission. That meant using a radioisotope thermoelectric generator, or RTG."

An RTG is an electrical generator that uses an array of thermocouples to produce electricity though the heat released by the decay of a suitable radioactive material, in this case plutonium. The unit for New Horizons was developed by the U.S. Department of Energy at the Materials and Fuels Complex, a part of the Idaho National Laboratory.

"For all of you who worked on this, thank you very much; it worked flawlessly," said Stern, who is associate vice president for Research and Development at the Southwest Research Institute (SwRI) in Boulder, Colorado. "For the whole scientific community, for our science team, for our mission team, and for all the people who worked this, a big round of applause to all of you."

The New Frontiers project was approved in June 2001 with the mission profile proposed and the spacecraft built by a team led by Stern and including researchers from SwRI and the Johns Hopkins University Applied Physics Laboratory (APL) in Laurel, Maryland.

Early in the process, the New Frontiers team contacted representatives of NASA's Launch Services Program (LSP) at the Kennedy Space Center in Florida.

"Soon after the mission was approved, we began discussions about what would be the best launch vehicle to provide the needed energy to send the spacecraft at unprecedented speeds and distances," said Mike Stelzer, who was LSP's mission manager for New Horizons. "We selected the Atlas V rocket to give us the needed boost for a 1,054-pound, piano-sized spacecraft at the speed necessary for a three-billion-mile trip."

The chosen version of the Lockheed Martin Atlas V used five strap-on solid rocket boosters, more than any previous launch. Added to that was a powerful Centaur upper stage.

"And all of that was still not enough," said Stelzer, who now works in the Vehicle Integration and Launch Support Branch of Kennedy's Ground Systems Development and Operations Program. "To get that needed additional push to achieve the required 'escape velocity,' we added the upper stage of a Boeing Delta II rocket."

According to Chuck Tatro, who was the New Horizons launch site mission manager for LSP, additional effort was needed to coordinate the many organizations involved.

"Ordinarily, mission meetings involve 30 to 40 people," he said. "For this, progress reviews frequently included 50 to 60 and sometimes as many as 100."

In addition to NASA, support came from SwRI, APL, Lockheed Martin, Boeing, the Idaho National Laboratory, and representatives from the New Horizons Program Office at the Marshall Space Flight Center in Alabama.

"It was a challenge to coordinate that may roles in the project," said Tatro who currently is chief of the Launch Site Integration Branch of LSP, "but since we were sending a probe to an unexplored planet, it was an exciting time."

"It was about 9 or 10 p.m. that night and everyone was pretty enthusiastic," Tatro said. "Sending a probe to Pluto had been a dream for a long time, and now the spacecraft was at the last stepping-off point before that long journey began."

After New Horizons was unloaded, it was transported to the center's Payload Hazardous Servicing Facility (PHSF) for preflight preparations.

"We made sure the design and configuration was well vetted to ensure the RTG was safe," Stelzer said.

While the spacecraft was being processed in the PHSF, the launch vehicle was being prepared at Cape Canaveral Air Force Station.

The Atlas V booster and Centaur second stage arrived at the Cape Skid Strip in late August 2005. Both were processed in the Atlas Space Operations Center. On Sept. 29, 2005, the first stage of an Atlas V rocket was raised to vertical on Launch Complex 41 at the Cape and the Centaur added shortly thereafter. Preparations for launch continued in the 30-story Vertical Integration Facility (VIF) with attachment of the five solid rocket motors.

This is where the New Horizons team faced their next challenge.

"Hurricane Wilma blew through while we were stacking the rocket," Stelzer said. "Part of a door tore off in the high winds and hit one of the solids."

Wilma crossed Florida on Oct. 24, 2005. The highest wind gust recorded at the spaceport was 94 mph, while the maximum sustained wind was 76 mph. A portion of a 41-by-275-foot reinforced fabric "megadoor" on the VIF blew off, causing some debris to impact a solid rocket booster. Lockheed Martin technicians replaced the damaged solid-fuel booster.

"They did a great job recovering from the storm and that kept us on schedule," Tatro said. "From the beginning of the project, we were on a tight timeline to take advantage of a brief lineup of Earth, Jupiter and Pluto."

The launch window extended from Jan. 11 to Feb 14, 2006. However, launching within the first 23 days would allow New Horizons to swing past Jupiter for a gravity assist that would speed the travel to Pluto. Although there were backup launch opportunities in February 2006 and February 2007, any launch outside the primary period would have forced the spacecraft to fly a slower trajectory directly to Pluto, delaying its encounter by five to six years.

A gravity assist maneuver puts a spacecraft in a trajectory close enough to a planet to use its gravity. This alters the probe's path in a "slingshot maneuver" to change speed saving propellant and travel time.

On Dec. 17, 2005, Tatro took a last look at New Horizons just before it was encapsulated in its payload fairing.

"It looked like a big grand piano, with the RTG stuck out to one side, topped off by a big seven-foot, high-gain dish antenna," he said. "It is an elegant spacecraft."

After the New Horizons spacecraft with its Delta II Star 48 third stage kick motor was transported from the PHSF to Launch Complex 41, it was mounted atop the booster rocket.

Lockheed Martin's Si Song was the third stage integrator for the Atlas V. He monitored the final countdown from the launch control center of the Atlas Spaceflight Operations Center at Cape Canaveral just four miles from pad 41. He still remembers the emotions of the moment.

"I had two thoughts going through my mind," said Song, now the Spacecraft Integration lead for United Launch Alliance. "One was, this is going to be the fastest man-made object in the solar system once it gets off its rocket. The second thing was that this is the last time that any human is going to see the spacecraft before it started on its three-billion-plus-mile journey to the edge of our solar system. It was really exciting and it almost brought tears to my eyes."

Launched from Cape Canaveral on Jan. 19, 2006, New Horizons received a gravity assist from Jupiter during its closest approach in 2007. That increased the probe's speed by 9,000 mph, successfully shortening its voyage to Pluto. New Horizons' closest approach will be on July 14, 2015, later passing Pluto's largest moon, Charon.

"This is one of the more memorable things that has happened in our time," Stern said, "the exploration of our solar system."