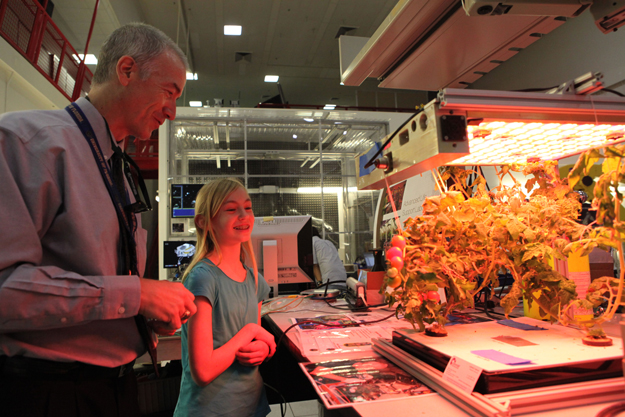 The American Society of Mechanical Engineers (ASME) Foundation, SpaceX, Digital Domain and NASA gave the finalists of the Space Tools 3-D Design Challenge a chance to see the future of space exploration under development as NASA prepares for a journey to Mars. These future engineers had the opportunity to see how NASA is conducting research and developing technologies that will allow us to live and work off the planet and eventually on Mars; how SpaceX is one of two U.S. Commercial companies developing a new crew transportation system that will take astronauts from the U.S. to the International Space Station and back; and how visual effects studios like Digital Domain can use the magic of Hollywood to virtually transport people to the surface of Mars to see what those future missions will be like. These educational trips coincided with the White House's National Week of Making that celebrates innovators, makers, and technology pioneers.

Each student created and submitted a digital 3-D model of a space tool that could be manufactured by the Zero-G 3-D printer aboard the International Space Station and used by astronauts in space.  Sydney Vernon of Bellevue, Washington, the winner in the Junior Group (ages 5-12) was honored for her winning submission of a space planter at the annual ASME meeting in Jacksonville, Florida, and was able to meet the amazing people that work at NASA's Kennedy Space Center.

Vernon met with Center Director and four-time shuttle astronaut Bob Cabana and visited the center’s Space Station Processing Facility, where teams are leading research such as Veggie to enable the production of fresh food for astronauts on the International Space Station and future deep space missions and running the Swamp Works innovation laboratory to accelerate technology development. Vernon also visited the Kennedy Space Center Visitor Complex to discover the past and future of America’s space exploration programs.

Inspired by her visit, Vernon said she was "debating what would be cooler: becoming a biologist, electrical or mechanical engineer.”

Nate Giese, Erik Carstens, and Ethan Cranston were acknowledged for their outstanding submissions and selections as Teen Group (ages 13-19) runners-up in the challenge with a trip to Los Angeles for visits to SpaceX and Digital Domain.

The trip included a VIP tour at SpaceX headquarters, where students saw first-hand how the company uses 3-D models to design, analyze, and validate launch-ready components for its rockets. The exclusive tour with SpaceX engineers also highlighted how the company is using 3-D printing in both research and production to advance space exploration technology for its cargo and crew Dragon spacecraft.

The Academy Award-winning visual effects studio Digital Domain hosted the students and showed them how digital 3-D models are used to make movies. The high school visitors were given the opportunity to suit up in Digital Domain's performance capture studio, where their body motion was captured and applied to a 3-D model of the astronaut exploration suit. Using Digital Domain’s virtual camera, students were able to view the performance in real-time and direct their own Mars walk movie clip. While working alongside top visual effects supervisors in the industry, the students also learned how to integrate their own space tool 3-D model into video footage recorded on the International Space Station.

The winner from the Teen Group (ages 13-19) is a Multipurpose Precision Maintenance Tool designed by Robert Hillan of Enterprise, Alabama. Hillan will receive his prize later when he gets to see his tool manufactured on the space station’s printer. The 3-D Printing in Zero G technology demonstration printer on the space station made the first 3-D printed parts in space last year. These parts were returned to Earth and are being analyzed at NASA’s Marshall Space Flight Center in Huntsville, Alabama.

NASA partnered with ASME Foundation on the Future Engineers 3-D Space Challenge Series to provide an opportunity for students to focus on real-world space exploration challenges because today’s students are our next generation of space explorers who will take the first steps on Mars. The second challenge -- to design a space container -- launched on May 12, and students in kindergarten through twelfth grade can submit their entries until Aug. 2. Learn more at www.futureengineers.org.