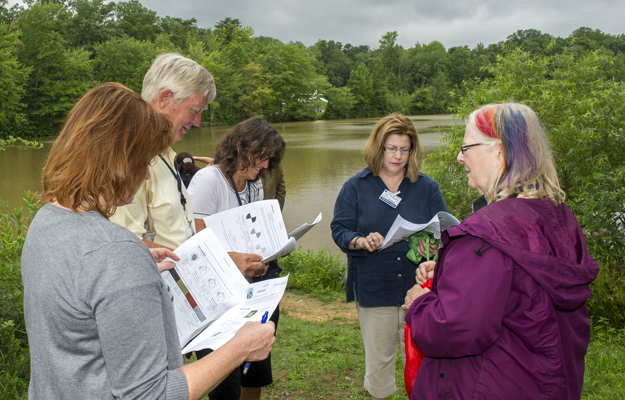 Maryland teachers will soon embark on NASA’s mission to enhance science learning in elementary schools across the state.

During the month of July, educators will study the Chesapeake Bay and surrounding area alongside scientists and engineers who will provide an insider perspective on scientific study.

This is just one part of NASA’s Summer Watershed Institute, organized by education specialists at NASA’s Goddard Space Flight Center in Greenbelt, Maryland.

One of the greatest benefits of the institute will be the opportunity for teachers to learn from scientists and engineers, said Dorian Janney, education and public outreach specialist at Goddard and project lead for the institute. "They will get a feel for what the scientists and engineers do, how they do it and what their career paths were like to share with students," she said.

Janney would know. On a day-to-day basis she works closely with scientists on the Global Precipitation Measurement (GPM) mission, one of several Earth science missions involved in the summer program. GPM scientists, together with scientists and engineers from other Earth-observing missions, will help teachers look at the Chesapeake Bay from the perspective of the hydrosphere, or water cycle, using observations taken from the mission. Other Earth science missions involved in the institute include Aqua, Aquarius, ICEsat-2, Landsat, Soil Moisture Active Passive and Terra. The breadth of science fields that are part of the institute show the intertwined nature of different branches of Earth science, which she said is especially important in light of recent education developments.

"NASA has so many education materials and resources focused on Earth science," Janney said. "We want to let teachers know that these are available to them, and that we’re here to help."

Janney and her team selected 30 third-, fourth- and fifth-grade teachers to attend the institute. Prior to their arrival at Goddard, they will complete about 20 hours of online classes where they will learn about the Global Learning and Observations to Benefit the Environment (GLOBE) program, an international science and education program, as well as about how NASA studies Earth sciences, the science occurring in the Chesapeake Bay and more. From July 6 through 10, participants will come to Goddard to meet with Summer Watershed Institute leaders, as well as scientists and engineers on various Earth science missions.

To give teachers hands-on experience implementing the processes their new knowledge, the institute will involve teachers in a final project after they return home, developing research questions related to the Chesapeake Bay and collecting data in the field for two weeks. They will use GLOBE protocols to complete the project. On July 30, teachers will give a poster presentation at Goddard detailing their findings.

"We received more than 150 applications for only thirty spots. This shows these types of programs provide a much-needed resource to educators," Janney said.

Janney plans to post materials from this first session of the Summer Watershed Institute on GPM’s education website so that other teachers may benefit. She will also share them with the GLOBE program, as well as taking the best ones through the independent peer review process for NASA Earth and space science education materials to make them available on NASA’s Wavelength digital resource library.

"My goal is to make the program replicable across all NASA centers, especially Wallops Flight Facility and Langley Research Center," Janney said. Both Wallops and Langley lie near the Chesapeake Bay in Virginia.

For more information about the Summer Watershed Institute: http://pmm.nasa.gov/education/summer-watershed-institute/2015-bios

For more information about GPM: http://www.nasa.gov/mission_pages/GPM/main/index.html