Press Release From: University of Houston
Posted: Sunday, May 3, 2015 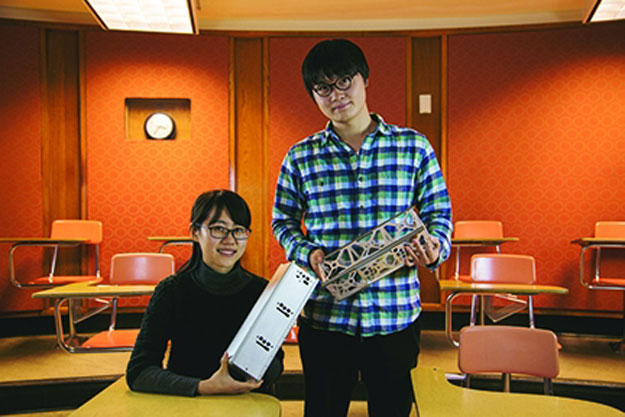 Steve Provence likes to talk about space, and engineering students at the University of Houston are benefiting from his conversations.

“Students love the experience of getting involved in the space program, to develop an actual functioning small satellite, and to see it go into orbit and perform its job,” Jackson said. “It’s a satellite that you can hold in the palm of your hand that’s going to orbit the Earth, which you developed – it doesn’t get any cooler than that.”

These small satellites, called CubeSats, are revolutionizing engineering academia around the world. Universities are the primary developers of the technologies, which provide affordable ways to perform basic scientific research and to educate students. CubeSat research at the UH Cullen College of Engineering has taken flight in recent years, providing both students and faculty with unprecedented access to space research.

CubeSats are 10-centimeter sized cubical satellites that occupy low Earth orbit, LEO, typically at an altitude of two hundred miles above mean sea level. Packed with sensors, they usually take varieties of measurements pertaining to Earth or space and transmit the data to small-scale mission control centers on university campuses.

These small satellites orbit Earth about every 90 minutes for weeks or months either solo, 1U, or in two-cube, 2U, or three-cube, 3U, stacked configurations. Eventually, they decay and burn up upon reentry to Earth’s atmosphere.

Compared to full-size satellites that require many millions of dollars to build and launch, the most expensive CubeSats cost less than $50,000 to develop and manufacture, and as little as $100,000 to launch. Although functionality is also reduced, CubeSats provide valuable scientific data and invaluable engineering opportunities for students, which are reasons enough for NASA and other agencies to show interest and provide funding.

“At NASA, we dream big, so the projects we’re most interested in are the multibillion dollar ones that sit on the launch pad 100 stories high,” Provence said. “CubeSats are seen as great tools and vehicles, so we’re interested, but we don’t want to devote a lot of time to them.”

“We have unique opportunities to collaborate with NASA through our CubeSat program,” Jackson said. “Space is natural for us here at UH, being so close to the Johnson Space Center.”

During one of many casual conversations outside their classrooms, Provence showed Jackson and Chen videos of the unreliable, off-the-shelf antenna technology used for CubeSats.

“We can do better,” Drs. Jackson and Chen told Provence.

Wire whip antennas are one of the main limitations of CubeSats, Jackson said. Existing small satellite antenna technology consists of mechanically-deployed antennas, such as a system wound around the top of a CubeSat and held in place by wires. After satellites are deployed, mission control centers send signals to burn the holding wires, thereby releasing the antennas. Unfortunately, signaling the release of spring-loaded wire whip antennas from Earth has presented opportunities for technological failures, which have occurred often enough to make the development of new antenna technologies a priority.

The UH Cullen College of Engineering provided seed money for students to explore better antenna options. Nicole Neveu, Joseph Casana, Richie Dettloff and Mauricio Garcia, all electrical and computer engineering undergraduates, rose to the challenge and adopted the research as their senior design project. Professor John Glover, with expertise in embedded computing, and professor Jack Wolfe, an expert in advanced micro- and nanofabrication, joined the students and other professors as the program progressed.

The students won the Best Paper award for their antenna design at the 2013 Institute of Electrical and Electronics Engineers International Conference on Wireless for Space and Extreme Environments, outmatching industry, government and academic researchers.

“I am so glad I came to UH and not somewhere else,” Neveu said. “I am very privileged to have had this opportunity to collaborate with NASA.”

The challenge was to develop transparent microstrip antennas that mounted flush on CubeSat frames with adequate functionality. Transparency was necessary to allow light to reach the CubeSat’s solar panels. The students succeeded with the development of a functional antenna on a quartz substrate, similar to antennas built into cellular phone circuit boards, but transparent.

“Even before I began working with the UH group, I always wanted an antenna that would mount on the surface of the CubeSats,” Provence said. “I told the students my dream for a new small satellite antenna, and they not only made it a reality, they made it far better than I ever expected.”

The student team designed and developed its antenna design in a mere three months with little overhead and a limited budget.

“These students just move faster than NASA could have – they don’t see obstacles, they see the possibilities, the opportunities,” Provence said. “And the best part is that they did this entirely by themselves – all I did was present them with the problem.”

In 2014, NASA awarded Jackson and Chen a two-year, $200,000 grant to continue their research at the UH Small Satellite Research Laboratory. The award was one of only 13 granted to universities to develop new small satellite technologies.

“For the most part, the students don’t see the projects from beginning to end,” Provence said. “They hand them off to the next team with full disclosure, so they can’t hide their flaws and mistakes – that’s the real world.”

Several UH senior design teams have worked on the CubeSat antenna technology project. The work is currently in the capable hands of several graduate students who continue to develop and improve the antennas. The process is long because students must design and fabricate the antennas to withstand the rigors of space, which requires thermal, vibration and vacuum testing, among other evaluations, Jackson said.

“We are in the middle of our two-year NASA contract so the technology is still in the development phase, but it looks to be far superior to what we have now,” Jackson said. “The hope is that we’ll have a successful product ready for future missions at the end of our contract.”

Provence, who also works closely with the AggieSat group at Texas A&M, described an unsuccessful 2009 CubeSat mission to his students: A team of Texas A&M engineering students designed and launched a 13-centimeter CubeSat, called AggieSat2, mated to an identical satellite, Bevo-1, built by engineering students at the University of Texas. When deployed from the payload bay of space shuttle Endeavour, Bevo-1 and AggieSat2 were to separate. They never did, and Bevo-1’s mission was unsuccessful. With little evidence of what caused the failure, the students were left without definitive answers. Ultimately, AggieSat2 downlinked limited data and was, on several occasions, commanded from the ground.

Once again, the UH team decided to address the challenge through a senior design project. Working closely with both NASA and AggieSat students, the Cullen College team designed and built a visual data capture system (VDCS) to photograph the ejection of a CubeSat into low Earth orbit from a full-size satellite.

Later this year, AggieSat4, containing the VDCS technology, will hitch a ride to the International Space Station (ISS) on a Space-X flight. The UH team’s system will capture any mechanical failures that might happen as UT’s CubeSat, Bevo-2, detaches from the larger satellite.

“It’s an excellent partnership in which we integrate the new antennas and VDCS onto the CubeSats,” Jackson said of the collaboration with the AggieSat lab at Texas A&M. “They’ve had a lot of experience developing and flying CubeSats, and by merging our forces together, we can develop an improved product.”

With a fish-eye lens that captures almost 180 degrees, the camera in the VDCS will capture images in the seconds directly before deployment to record any conditions affecting the bay door. As Bevo-2 detaches from AggieSat4, the camera will take 10 rapid-fire sequences in about 10 seconds. The VDCS will have several other photographic missions once the satellite is launched from the bay of the ISS.

“I want to have a picture on my wall that I can show and say, ‘I took a picture in space,’” McNeil said.

“We’d like to build an autonomous, complete capability where we build and launch our own CubeSats and monitor them from our own mini-mission control center,” Dunbar said. “It gets students into engineering and keeps them in engineering.”