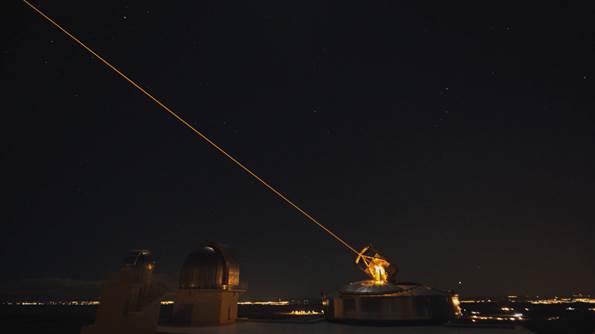 U.S. officials have become concerned about China's anti-satellite capabilities, which could potentially threaten the satellites that give the U.S. military its edge on the battlefield and provide the GPS signals that smart phones, ATMs, and power grids use.  David Martin reports on this competition high above the Earth on the next edition of 60 MINUTES, Sunday, April 26 (7:00-8:00 PM, ET/PT) on the CBS Television Network.

Martin provides a rare look at Space Command, the branch of the U.S. Air Force charged with launching and protecting U.S. satellites.  The report includes stunning images of a massive, laser-guided telescope in Albuquerque, NM, that can be used to surveil the satellites of potential adversaries like China.  Watch an excerpt.

USAF Gen. John Hyten, the head of Air Force Space Command, tells Martin that he believes China will soon be able to threaten U.S. satellites in "every orbital regime that we operate in," from low earth orbit a few hundred miles above the earth, to geosynchronous orbit more than twenty thousand miles up  where some of the military's most important satellites circle the Earth.

"Now we have to figure out how to defend those satellites, and we're going to," Hyten says.

"Today, can a U.S. Military satellite maneuver itself out of  the way of an upcoming anti-satellite weapon?"  Martin asks. "The answer is maybe," Hyten says.  "It depends on the satellitewhen it was built how old it iswhen we know the threat is coming.''

Martin reports that the U.S. has tested anti-satellite weapons in the past and, by most accounts, spends ten times more on space than the Chinese. A White House document obtained by 60 MINUTES estimates the Pentagon spends about $25 billion a year on space  more than NASA or any other space agency in the world.  The estimate includes spy satellites and other classified spending.

In a statement, the Chinese embassy in Washington, DC, told 60 MINUTES that China is "committed to the peaceful use of outer space."

Gen. Hyten says the U.S. wants peace but must be prepared for conflict.   "It's a competition that I wish wasn't occurring, but it is," says Hyten.  "If we're threatened in spacewe have the right of self-defense and we'll make sure we can execute that right."