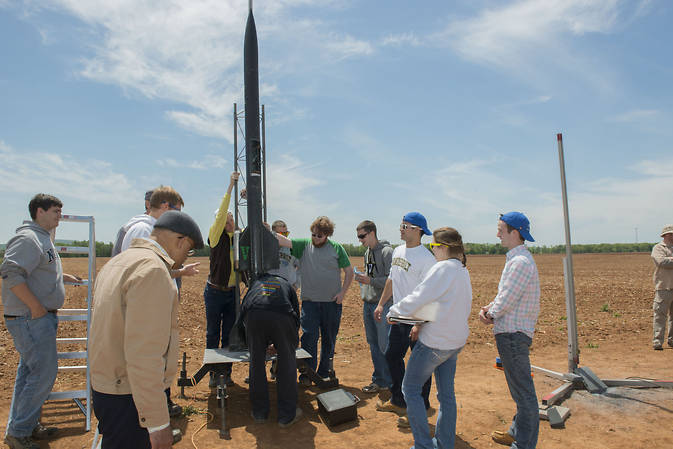 Middle school and high school teams will launch their rockets to an altitude of one mile, deploy onboard science experiments and land safely using a system of recovery parachutes. University and college teams will participate in either the Mini-Mars Ascent Vehicle (Mini-MAV) or the Maxi-Mars Ascent Vehicle (Maxi-MAV) divisions. Mini-MAV teams must use a robotic system to autonomously load a payload into their rocket, launch to half a mile and eject the payload during descent. Maxi-MAV teams, competing for a share of $50,000 in prize money, will attempt to meet more autonomy requirements before also launching to a half mile.

From 11 a.m. to 1 p.m., April 9, students will participate in a Rocket Fair at Marshall's Activities Building 4316, where they will give technical presentations to, and get valuable feedback from, engineers and team members from NASA and Student Launch corporate sponsor Orbital ATK.

New to this year's Student Launch event is a partnership with NASA's Centennial Challenges, the agency's prize program for citizen inventors. The awards banquet will be held at 6:30 p.m. April 10 inside the Davidson Center for Space Exploration at the U.S. Space & Rocket Center at 1 Tranquility Base in Huntsville. Real-time coverage of the banquet and awards presentation will be provided on the NASA Student Launch Twitter account @NASA_Launchfest.

Media interested in covering Student Launch activities should contact Angela Storey of the Marshall Public and Employee Communications Office at 256-544-0034 no later than 4 p.m. April 8. Media attending events at Marshall must report to the Redstone Visitor Center at Gate 9, Interstate 565 interchange at Rideout Road and Research Park Boulevard no later than 10 a.m. April 9 for escort. Vehicles are subject to a security search at the gate. Journalists will need photo identification and proof of car insurance.

The Student Launch program challenges participating student teams to design rockets that address the research needs of different NASA missions. Student teams will share their research results, which may be used to design and develop future NASA projects.

Student Launch is open to public viewing and will be aired live on NASA Television and Marshall's Ustream and Twitter accounts, at: