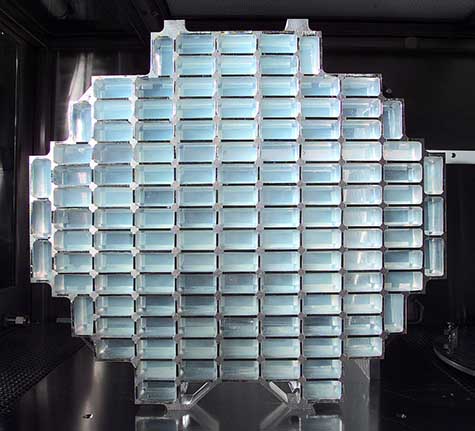 This past August, a consortium of 65 scientists announced in the journal Science that they have so far found seven probable but not confirmed (“level 2” ) interstellar dust specks in a collector returned to Earth by the Stardust spacecraft in 2006 [http://www.sciencemag.org/content/345/6198/786]. An entire issue of the journal Meteoritics & Planetary Science was also devoted to the hunt for the dust [http://onlinelibrary.wiley.com/doi/10.1111/maps.2008.43.issue-1-2/issuetoc].

It is a mistake to think of the interstellar dust grains simply as dust, said Christine Floss, PhD, research professor of physics in Arts & Sciences and a member of the consortium. “They are valuable not in and of themselves, but rather for the information they carry. To have these grains in your laboratory is like being handed a sealed envelope with ‘Secrets of the universe’ scrawled on the outside. Who could resist opening it?”

The seven specks were found in the second of Stardust’s two sample trays. The first tray, which had been exposed to the spray of a comet’s tail, was processed in the year following the sample pod’s return. Scientists then turned to the second tray, which was exposed to a stream of interstellar dust flowing through the solar system.

One of the many ironies of the Stardust mission is that the gridwork of aluminum foil, originally intended only to support tiles of a light foam called aerogel that was to collect the dust, proved to be dust collectors as well. Incoming dust pocked them with tiny craters lined with melted residue. So the searchers were divided into two teams: those scrutinizing the aerogel and those inspecting the foils.

To find the motes in the aerogel, the University of California, Berkeley, organized a citizen-science project, Stardust@home that recruited 30,000 volunteers. The volunteers, who called themselves ‘dusters,’ found three of the seven dust particles, which they named Orion, Haylabook and Sorok.

The task of examining the foils was divided among six labs, including the Laboratory for Space Sciences at Washington University in St. Louis. Floss’s husband and colleague, Frank Stadermann, was an expert in the analysis of very small samples of extraterrestrial materials and had devoted his career to developing new techniques for this purpose.

As sample advisor for the Stardust mission he helped define the protocols that would govern the search for interstellar dust. In creating the protocols he and his colleagues were venturing into unexplored territory. Since nobody had ever worked with interstellar dust, no one could be certain what it was or how best to identify it.

Undergraduate students hired by Floss and Stadermann -- who died unexpectedly from a cerebral hemorrhage in 2010 -- found three of the four craters in the foil probably made by interstellar particles. The fourth was found by another lab.

“We didn’t think to name our particles,” Floss said. “ We missed the boat on that one.”

Why All the Fuss About Seven Specks of Dust?

Most of us happily accept without question the material world, but every once in a while some curious soul has asked, “Where did all this stuff come from?”

The answer is that it was forged under enormous heat and pressure in the interiors of stars. But cosmochemists like Stadermann and Floss have been struggling for many years to explain how natural processes could create all of the elements in the periodic table.

For the most part they have had to rely on indirect evidence, such as the color of starlight or the way mathematical equations played out in a computer. But the Stardust mission offered them a sample -- if only a pinch -- of the thing itself.

The goal of Stardust was to return fresh material from both the solar system and the interstellar medium. One collector was to sample dust dating from the solar system’s formation that had been sealed in comet Wild-2 for most of the past 4.5 billion years. The second was to grab a sample of “contemporary” interstellar dust from a stream flowing through the solar system from the direction of the constellation Ophiuchus.

“Our hope,” Floss said, “is that by comparing the old solar system dust to the contemporary interstellar dust we might learn how the interstellar environment in our corner of the universe has changed over the past four and a half billion years -- if indeed it has.”

The Aerogel Team vs. the Aluminum Foil Team

The Stardust sample trays had been made of aerogel because this fluffy but tough material provided a way of stopping the dust, which was traveling six times faster than a speeding bullet, without damaging it.

Aerogel’s downside was that it didn’t always behave well during analytical tests. “It can be a nightmare to deconvolve what’s aerogel and what’s actually particle, when everything is intermingled and melted together,” Floss said.

In the meantime, the foil “dusters” had their own problems. Unlike the aerogel, the foil doesn’t reveal a particle’s direction of travel. The shape of a crater depends on the particle’s trajectory but also, unfortunately, on its shape and composition.

Unlike the aerogel particles, the dust particles melted when they slammed into the foils, destroying their structure but preserving their chemistry. So chemistry became the basis for the first pass in the sorting of the foil craters.

Like every spacecraft, Stardust had been pelted by micrometeoroids, which had knocked out bits of glass or metal that in turn had peppered the collectors, but this man-made debris has a very different chemical signature than material of interstellar origin.

The Heroism of Students

But before analysis could begin, candidate craters had to be found. The interstellar particles were tiny -- 100,000 of them, lined up, still wouldn’t amount to an inch -- and left craters too small to be seen with the unaided eye when they hit the foil.

So the foils were scanned at high resolution with a secondary electron microscope, and the images were then searched manually to locate individual craters. Although progress has been made on automated searches for craters, manual searches are currently still more effective.

Undergraduates did the hard work of looking at thousands and thousands of images to find the ones the scientists would be interested in. Floss then sorted the candidates a second time at higher magnification.

“The level of magnification for the initial search was a compromise,” Floss said. The images are huge, but their resolution was still low enough that a speck with a dark center could be mistaken for a crater. “If we had done the initial searches at a higher magnification,” she said, “we would never have made it through all the images.”

Clearly not every undergraduate was ‘duster’ material, so Floss put students who wanted to work in the laboratory through a test. They were told how many craters there were in a set of images and asked to find them. (Go tohttps://news.wustl.edu/news/Pages/27558.aspx to try a similar quiz.)

And Then There Were Three

Extensive analysis eliminated most of the interstellar dust candidates except for three particles in the aerogel and four craters in the foil. Were these the long-sought interstellar particles?

The most definitive marker of an interstellar particle is an oxygen isotope composition inconsistent with solar system values. Such a composition would kick the dust candidates from “level 2” (probable) to “level 3” (certain).

When all other avenues had been exhausted, the oxygen isotope ratios of the residues in two of the foil craters were measured. Disappointingly, they turned out to be consistent with solar system values.

In the meantime, however, this measurement had destroyed two of the craters. And the remaining two candidates from the aluminum foil were lost during transport between laboratories.

So that leaves three probable particles, still stuck in aerogel, although the scientists have examined only a small fraction of the collector.

Is it worth it? Floss’s answer is unequivocal. “It’s fascinating to be able to work on something that nobody else has ever worked on,” she said. “This is the only sample of the contemporary interstellar medium we have, and we still have so many unanswered questions.”