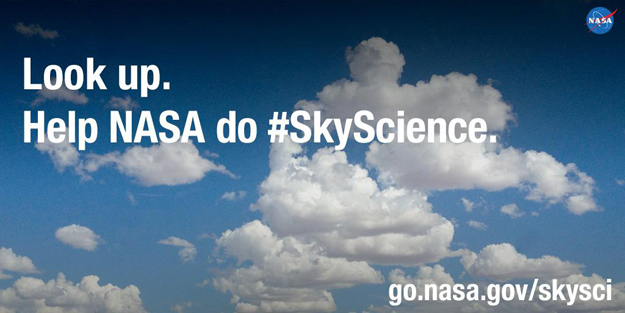 NASA is inviting people around the globe to step outside during Earth Science Week, Oct. 12-18, observe the sky and share their observations as citizen scientists.

NASA's #SkyScience activity is part of an annual educational event organized by the American Geosciences Institute to encourage the public to engage in Earth sciences. Citizen scientists can participate in this global Earth science data collection event by observing, photographing and reporting on clouds over their location as a NASA satellite passes over. Reports and photos will be compared to data collected by NASA Earth-observing instruments as a way to assess the satellite measurements.

In addition to #SkyScience, NASA has been engaging students in cloud observation for years through the agency's Students' Cloud Observations On-Line (S'COOL) project.

“#SkyScience is another opportunity to get lots of reports in a short period of time and enable additional statistical analysis," said S'COOL project lead Lin Chambers of NASA's Langley Research Center in Hampton, Virginia.

To learn how to get involved in the #SkyScience activity, visit:

For information about NASA's Earth science activities in 2014, visit: