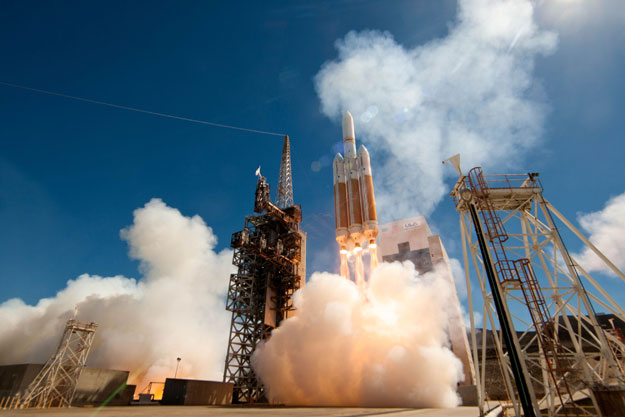 A United Launch Alliance (ULA) Delta IV Heavy rocket carrying a payload for the National Reconnaissance Office (NRO) lifted off from Space Launch Complex-6 here at 11:03 a.m. PDT today. Designated NROL-65, the mission is in support of national defense. This is ULA’s eighth launch in 2013, the 24th Delta IV mission and the second Delta IV Heavy launch from Vandenberg Air Force Base.

“We are truly honored to deliver this critical asset to orbit,” said Jim Sponnick, ULA vice president, Atlas and Delta Programs. “The ULA Delta IV Heavy is currently the world’s largest rocket, providing the nation with reliable, proven, heavy lift capability for our country’s national security payloads from both the east and west coasts. I congratulate the combined NRO, Air Force, ULA, and supplier team on today’s successful launch of the NROL-65 mission.”

The EELV program was established by the United States Air Force to provide assured access to space for Department of Defense and other government payloads. The commercially developed EELV Program supports the full range of government mission requirements, while delivering on schedule and providing significant cost savings over the heritage launch systems.

For more information on ULA, visit the ULA website at www.ulalaunch.com, or call the ULA Launch Hotline at 1-877-ULA-4321 (852-4321). Join the conversation at www.facebook.com/ulalaunch and twitter.com/ulalaunch.