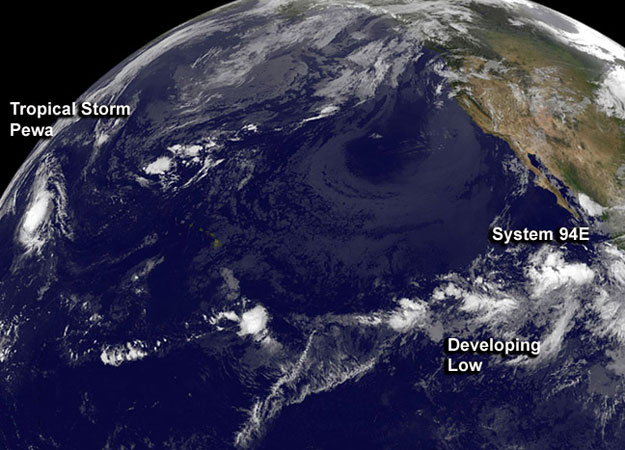 A view of the Pacific Ocean from NOAA's GOES-West satellite caught Tropical Storm Pewa moving through the Northwestern part of the ocean and two developing low pressure areas, one designated System 94E, several hundred miles off the Mexican coast.

NOAA's GOES-West satellite infrared imagery from today, Aug. 22 at 1200 UTC/8 a.m. EDT showed Tropical Storm Pewa heading west in the Northwestern Pacific. Pewa had a rounded circulation. The other two developing lows did not appear circular in the GOES-West image. The GOES image was created by the NASA GOES Project at NASA's Goddard Space Flight Center in Greenbelt, Md. Multi-spectral satellite imagery revealed that the convection is still shallow (weak) on the western side of the tropical storm, but convection is stronger over the center of circulation.

At 0900 UTC/5 a.m. EDT on Aug. 22, Pewa was centered near 23.6 north latitude and 169.3 west longitude, about 280 nautical miles northeast of Wake Island. Maximum sustained winds are near 35 mph/55 kph. Tropical Storm Pewa is moving to the north-northwest at 11 knots/12.6 mph/20.3 kph and the Joint Typhoon Warning Center expects it to continue moving in that direction for the next couple of days. Pewa is headed into cooler waters over the next several days, which are expected to slowly weaken the system, according to the Joint Typhoon Warning Center

The broad area of low pressure, which does not have an investigation number yet, appears disorganized on the GOES-West satellite imagery. The low is located near 16 north and 122 west, about 900 miles southwest of the southern tip of the Baja California peninsula. The low continues to generate limited shower and thunderstorm activity and the National Hurricane Center expects the low to become absorbed into the circulation associated with System 94E. As System 94E organizes and strengthens, this low pressure area's chances for developing into its own depression have dwindled to just 10 percent.

System 94E is the low pressure area to watch in the Eastern Pacific. It has high chance for becoming a tropical depression later today, Aug. 22, or tonight. It is centered about 425 miles south of Cabo San Lucas, Mexico. The National Hurricane Center noted that during the morning hours on Aug. 22, showers and thunderstorms have re-formed near the center. The low is expected to move north-northwestward at 5 to 10 mph and reach colder water west of the Baja California peninsula by the weekend of Aug. 24 when conditions will not favor development.

Pewa is expected to strengthen a little over the next several days before it weakens, while System 94E will likely become a new tropical depression in the Eastern Pacific over the same time frame.