Used Parachute on Mars Flaps in the Wind 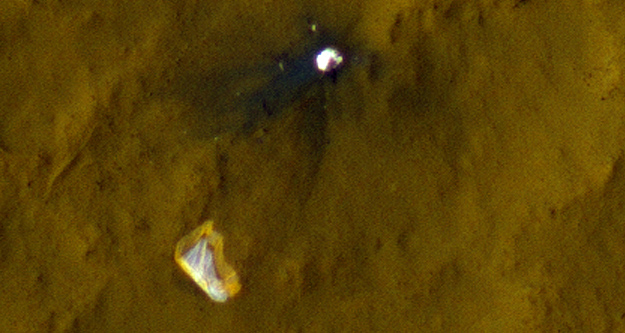 Photos from NASA's Mars Reconnaissance Orbiter show how the parachute that helped NASA's Curiosity rover land on Mars last summer has subsequently changed its shape on the ground.

The images in the sequence of photos are available online at http://uahirise.org/releases/msl-chute.php and at http://photojournal.jpl.nasa.gov/catalog/PIA16813 .

Researchers have used HiRISE to study many types of changes on Mars. Its first image of Curiosity's parachute, not included in this series, caught the spacecraft suspended from the chute during descent through the Martian atmosphere.

HiRISE is operated by the University of Arizona, Tucson. The instrument was built by Ball Aerospace & Technologies Corp., Boulder, Colo. The Mars Reconnaissance Orbiter Project and Curiosity are managed by NASA's Jet Propulsion Laboratory, Pasadena, Calif., for NASA's Science Mission Directorate, Washington. JPL is a division of the California Institute of Technology in Pasadena.

For more information about the Mars Reconnaissance Orbiter, which has been studying Mars from orbit since 2006, visit http://www.nasa.gov/mro .