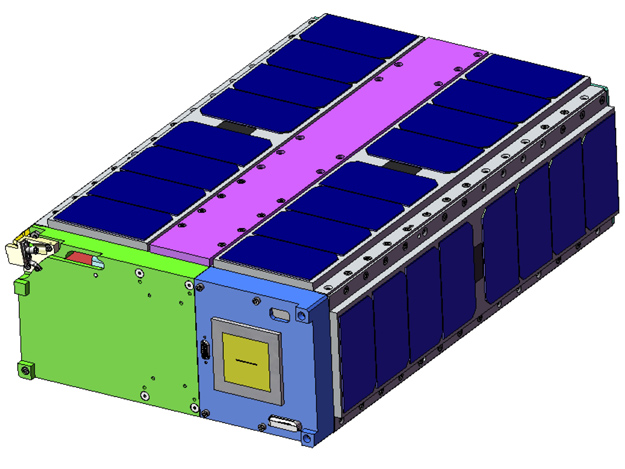 NASA's CubeSat Launch Initiative (CSLI) recently selected E. coli AntiMicrobial Satellite (EcAMSat) as one of 24 small satellites to fly as secondary payloads aboard rockets planned to launch in 2014, 2015 and 2016.

EcAMSat is being developed through a partnership between NASA's Ames Research Center and the Stanford University School of Medicine. It will be the first NASA mission in the "6U" configuration, with six times the volume of a single cubesat unit ("1U"). Cubesats belong to a class of research spacecraft called nanosatellites. The cube-shaped satellites measure about four inches on each side, have a volume of about one quart, and weigh less than three pounds. Though it is large for a nanosatellite, the 6U EcAMSat weighs only about 30 pounds and measures approximately 14.4 inches long, 8.9 inches wide and 3.9 inches tall.

"The development and flight of EcAMSat will mark Ames' eighth nanosatellite mission since 2006," said David Korsmeyer, director of engineering at NASA Ames. "Ames leads nanosatellite work within NASA, and is actively working within the government, academia and industry on developing and standardizing the 6U cubesat format, including the associated launch vehicle adapters and dispensers."

The 6U format enhances nanosatellite applicability for space missions by providing more power and volume for instruments, avionics, actuators and propulsion. The larger format improves payload accommodation and extends mission duration capabilities, while still retaining its ability to be launched as a secondary payload.

The primary scientific purpose of the EcAMSat mission is to investigate how and whether space microgravity affects the antibiotic resistance of E. coli, a bacterial pathogen responsible for urinary tract infection in humans and animals. Bacterial antibiotic resistance may pose a danger to astronauts in microgravity, where the immune response is weakened. Scientists believe that the results of this experiment could help design effective countermeasures to protect astronauts' health during long-duration human space missions.

"Small satellites provide effective and economical means for the current project aimed at understanding the genetic basis of increased antibiotic resistance of bacterial pathogens under microgravity," said A.C. Matin, principal investigator for this study and a professor of microbiology and immunology at the Stanford School of Medicine. "The planned experiments will determine the role of bacterial innate resistance in antibiotic tolerance, revealing the identity of proteins that can be targeted for increasing antibiotic effectiveness and countering the serious problem of bacterial drug resistance, which appears to be especially marked in microgravity."

After launch EcAMSat will be deployed from a specialized dispenser also designed and developed at NASA Ames, called the 6U Nanosatellite Launch Adapter System Dispenser. EcAMSat then will spend a minimum of 45 days in low-Earth orbit completing the experiment and relaying data to the ground.

EcAMSat was competitively selected for development by NASA's Space Life and Physical Sciences Division in 2010 and awarded to NASA Ames and the Stanford University School of Medicine. In addition to the selection of EcAMSat, NASA Ames also has been chosen for NASA CSLI missions in 2011 - for the Lightsail mission - and 2012 - for the SporeSat mission, which is currently scheduled for launch in September 2013.