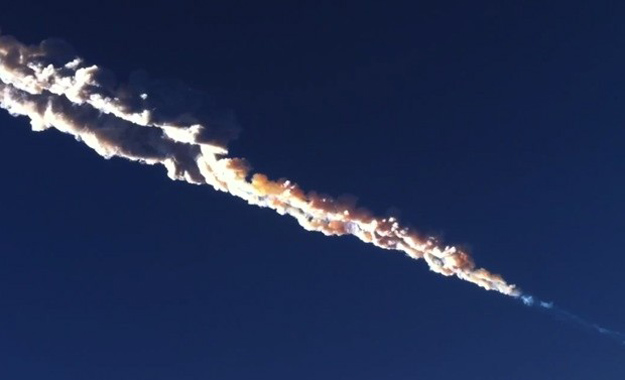 You may have heard of the meteorite that struck the Russian Chelyabinsk region at about 09:15 local time in the region about 1,500 km (930 miles) east of Moscow in the Ural mountains. The damage caused by the shock wave has been extensive. As reports continue to stream in, the number of people injured has been increasingly steadily and nears 1,000, mostly caused by window glass blown out by the shockwave. The amateur videos and pictures illustrate the power that a small object entering the atmosphere at high speed can have.

Estimated at about 10 tons, and about 2 meters across, this object (called a bolide when they are this bright) streaked through the sky at a speed of 54,000 kph (33,000 mph), and due to the extreme forces of atmospheric entry, broke apart between 30-50 km (18-32 miles) above the ground. Despite the coincident timing, the Russian meteorite has nothing to do with 2012 DA14, as the objects have decidedly different trajectories. A fragment from 2012 DA14 would have been moving from south to north, the path of the meteorite is from northeast to southwest. We will certainly learn more about the nature of this object when fragments from it are recovered and studied in laboratories.

In our previous update (http://planetaryresources.us5.list-manage1.com/track/click?u=86e5e3fd66ecbdeda82b09373&id=2176ec8bef&e=edc07fd28d) , we mentioned that many asteroids pass by Earth with little or no warning. We were not exaggerating. Despite considerable progress in asteroid detection, only about one in ten close-approaching asteroids are known about ahead of time. While not every approaching asteroid may be detected, and with little warning not all can be prevented,
in this case a little warning would have prevented many injuries, and quelled the panic that followed.
Today's events, both with 2012 DA14 and the Russian meteorite, are a reminder that our Solar System is a crowded place. Today was unnerving indeed, and scary and unfortunate for those near Chelyabinsk. We don't know when the next one of these might appear, but we're working to see it coming!

Be sure to watch the many live events (http://planetaryresources.us5.list-manage2.com/track/click?u=86e5e3fd66ecbdeda82b09373&id=07336e2057&e=edc07fd28d) going on today as 2012 DA14 safely passes by, and take the opportunity to learn more about these asteroids that are potentially hazardous, but potentially rich reserves of resources for our future prosperity on Earth and in space.