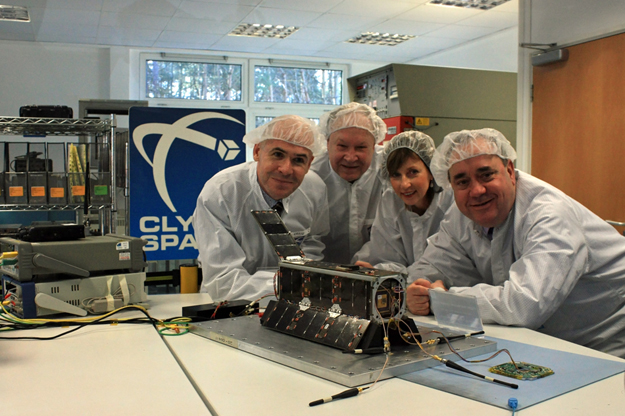 The First Minister of Scotland, Alex Salmond, took a close-up view of Scotland's first satellite today. Clyde Space, which designed and built the UKube-1 nanosatellite, is running final tests at the company's headquarters in the West of Scotland Science Park ahead of its deployment next month to Kazakhstan, where it will be launched in a Russian Soyuz-2 rocket later this year.

Employing more than 20 highly-skilled full-time staff, Clyde Space is a leading producer of small satellite, nanosatellite and 'CubeSat' systems - fully-functional satellites that 'piggy-back' on other launches to minimise costs and boost the commercial availability of space research. The company develops and delivers products to commercial aerospace, defence companies and academic teams around the world and now plans to open a base next year in the United States - which already accounts for almost a third of its current orders.

Mr Salmond said: "From James Clerk Maxwell's electromagnetic theory that paved the way for deep-space telescopes, to Professor Higgs work at the University of Edinburgh into the building blocks of all matter, Scottish science has helped humankind better understand our universe. By pioneering a cost-effective way of supporting more space research, the Clyde Space team is building on a strong heritage of engineering, ingenuity and innovation. I'm delighted that, through Scottish Enterprise, we've been able to support this exciting company as it has built the business globally, to a point, now, where it is planning a new base in the US.

"It is great to see up close Scotland's first space satellite - representing another successful Scottish export drive, but not as we know it. After years of hard work Craig and his stellar team have shown they have the right stuff to achieve a space mission and they're ready to make it so. I'm delighted that the mission not only supports several research projects but will engage young people online and can help inspire the next generation of space scientists and engineers. We cannot change the laws of physics but it's important that we continue to study and understand them better. It's one small satellite for Clyde and a giant leap for their extraterrestrial export business and a new hope for space science in Scotland!"

The UKube-1 is a UK Space Agency mission that will include experiments to use Global Positioning System (GPS) technology to measure space weather and to test how cosmic radiation could improve the security of communications satellites. The satellite will also carry a payload made up of five experiments that students across the UK and the public can interact with and an outreach programme for school pupils.

Clyde Space CEO Craig Clark said: "Clyde Space is a product-focused company operating in a traditionally service-based market. This has allowed the company to clearly differentiate itself to supply to the emerging, fast growing, nanosatellite sector. The size of spacecraft that Clyde Space mostly work with weigh less than 5 kilograms and are about the size of a small desktop computer. Through our innovation and understanding of this market, Clyde Space has positioned itself as a world leader in the supply of subsystems, especially to organisations in the USA such as NASA, the US Air Force and the European Space Agency. With the development of our latest product, a complete satellite, Clyde Space aims to significantly grow the company over the next five years and expand further into the US market in particular. Ukube-1 is the first spacecraft to be design and built in Scotland - if we are successful in our business plan, it will be the first of many more Scottish satellites."

The First Minister was joined by Scottish Enterprise CEO Lena Wilson and Sergey Krutikov, the Consul General of the Russian Federation in Scotland during today's visit - part of a programme of events this week aimed at showcasing the best of Scottish science.

Lena Wilson, CEO of Scottish Enterprise, which has been supporting the company to further its innovation through product development and increase overseas trading, said: "The global space industry is forecast to be worth #400 billion by 2030, so there's huge opportunity for innovative companies like Clyde Space to grab a share of this international market. Exporting is still one of the key routes to business growth and economic recovery. The recent Global Connections Survey highlighted the international growth opportunities which exist for Scottish companies in both emerging markets and more traditional economies. When companies couple product innovation tailored to meet customer needs with targeting of new markets and geographies, it's a powerful recipe for business success and continuing, sustainable growth."

Hugh Stewart OBE, Clyde Space chairman and Managing Partner of private equity company Coralinn LLP a financial backer of the company, added: "Clyde Space is a fantastic Scottish example of how a small company can compete globally in leading-edge manufacturing. Its strategy is for continued growth and we hope to open in the USA in the next year. At Coralinn we invest in high-growth Scottish companies wanting to compete in a global market and Clyde Space is a classic example of how companies of all sizes can succeed at that level. Scotland has the people, support networks and capacity to grow more businesses like Clyde Space."

CubeSats are tiny fully functional satellites with typical mass of 4kg and dimensions of around 100mm x 100mm x 340mm. CubeSats typically piggy-back on other launches and can be flown within a year of inception. The rapidly increasing capabilities of CubeSat related technologies, commercial availability of these and the low relative costs opens up a large number of possibilities for carrying out detailed space science studies.