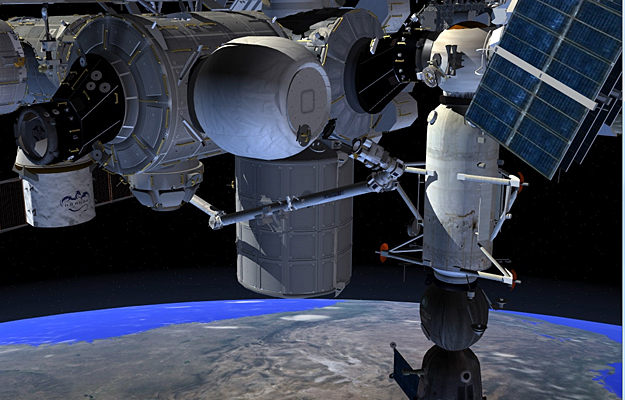 NASA Deputy Administrator Lori Garver announced Wednesday a newly planned addition to the International Space Station that will use the orbiting laboratory to test expandable space habitat technology. NASA has awarded a $17.8 million contract to Bigelow Aerospace to provide a Bigelow Expandable Activity Module (BEAM), which is scheduled to arrive at the space station in 2015 for a two-year technology demonstration.

"Today we're demonstrating progress on a technology that will advance important long-duration human spaceflight goals," Garver said. "NASA's partnership with Bigelow opens a new chapter in our continuing work to bring the innovation of industry to space, heralding cutting-edge technology that can allow humans to thrive in space safely and affordably."

The BEAM is scheduled to launch aboard the eighth SpaceX cargo resupply mission to the station contracted by NASA, currently planned for 2015. Following the arrival of the SpaceX Dragon spacecraft carrying the BEAM to the station, astronauts will use the station's robotic arm to install the module on the aft port of the Tranquility node.

After the module is berthed to the Tranquility node, the station crew will activate a pressurization system to expand the structure to its full size using air stored within the packed module.

During the two-year test period, station crew members and ground-based engineers will gather performance data on the module, including its structural integrity and leak rate. An assortment of instruments embedded within module also will provide important insights on its response to the space environment. This includes radiation and temperature changes compared with traditional aluminum modules.

"The International Space Station is a uniquely suited test bed to demonstrate innovative exploration technologies like the BEAM," said William Gerstenmaier, associate administrator for human exploration and operations at NASA Headquarters in Washington. "As we venture deeper into space on the path to Mars, habitats that allow for long-duration stays in space will be a critical capability. Using the station's resources, we'll learn how humans can work effectively with this technology in space, as we continue to advance our understanding in all aspects for long-duration spaceflight aboard the orbiting laboratory."

Astronauts periodically will enter the module to gather performance data and perform inspections. Following the test period, the module will be jettisoned from the station, burning up on re-entry.

For more information about the International Space Station and animation of the BEAM, visit: http://www.nasa.gov/station