Press Release From: Proceedings of the National Academy of Sciences
Posted: Thursday, January 10, 2013 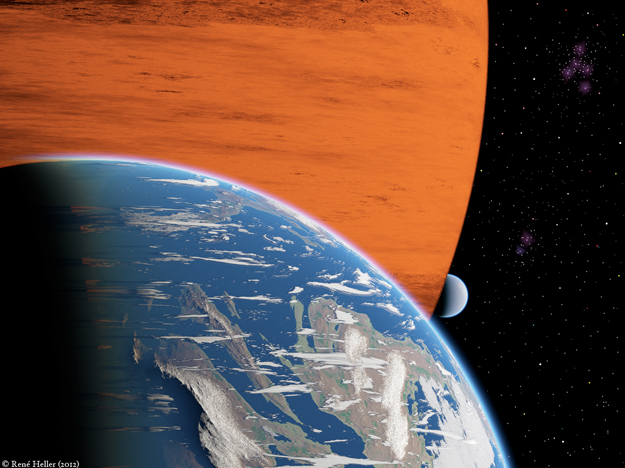 In their search for habitable worlds, astronomers have started to consider exomoons, or those likely orbiting planets outside the solar system. In a new study, a pair of researchers has found that exomoons are just as likely to support life as exoplanets.

The research, conducted by Rene Heller of Germany's Leibniz Institute for Astrophysics Potsdam and Rory Barnes of the University of Washington and the NASA Astrobiology Institute, will appear in the January issue of Astrobiology.

About 850 extrasolar planets -- planets outside the solar system -- are known, and most of them are sterile gas giants, similar to Jupiter. Only a few have a solid surface and orbit their host stars in the habitable zone, the circumstellar belt at the right distance to potentially allow liquid surface water and a benign environment.

Heller and Barnes tackled the theoretical question whether such planets could host habitable moons. No such exomoons have yet been discovered but there's no reason to assume they don't exist.

The climatic conditions expected on extrasolar moons will likely differ from those on extrasolar planets because moons are typically tidally locked to their planet. Thus, similar to the Earth's moon, one hemisphere permanently faces the planet. Beyond that moons have two sources of light -- that from the star and the planet they orbit -- and are subject to eclipses that could significantly alter their climates, reducing stellar illumination. "An observer standing on the surface of such an exomoon would experience day and night in a totally different way than we do on Earth." explained Heller. "For instance stellar eclipses could lead to sudden total darkness at noon."

Heller and Barnes also identified tidal heating as a criterion for exomoon habitability. This additional energy source is triggered by a moon's distance to its host planet; the closer the moon, the stronger tidal heating. Moons that orbit their planet too closely will undergo strong tidal heating and thus a catastrophic runaway greenhouse effect that would boil away surface water and leave them forever uninhabitable.

They also devised a theoretical model to estimate the minimum distance a moon could be from its host planet and still allow habitability, which they call the "habitable edge." This concept will allow future astronomers to evaluate the habitability of extrasolar moons. "There is a habitable zone for exomoons, it's just a little different than the habitable zone for exoplanets," Barnes said.

The exquisite photometric precision of NASA's Kepler space telescope now makes the detection of a Mars- to Earth-size extrasolar moon possible, indeed imminent. Launched in 2009, the telescope enabled scientists to reveal thousands of new extrasolar planet candidates. Since 2012 the first dedicated "Hunt for Exomoons with Kepler" is under way.

Heller and Barnes' paper, "Exomoon Habitability Constrained by Illumination and Tidal Heating," will be published in the January issue of the journal Astrobiology.