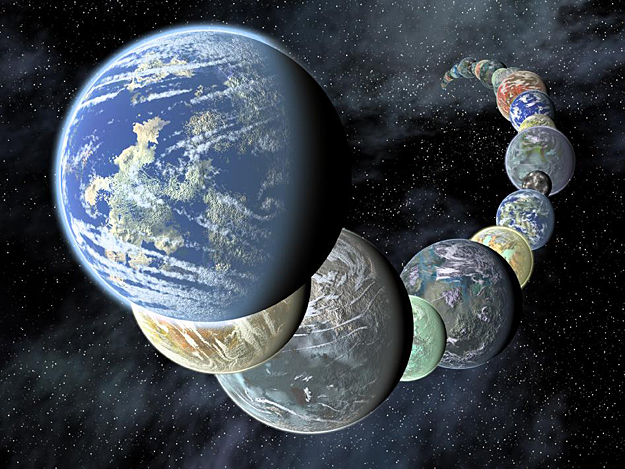 NASA's Kepler mission Monday announced the discovery of 461 new planet candidates. Four of the potential new planets are less than twice the size of Earth and orbit in their sun's "habitable zone," the region in the planetary system where liquid water might exist on the surface of a planet.

Based on observations conducted from May 2009 to March 2011, the findings show a steady increase in the number of smaller-size planet candidates and the number of stars with more than one candidate.

"There is no better way to kickoff the start of the Kepler extended mission than to discover more possible outposts on the frontier of potentially life bearing worlds," said Christopher Burke, Kepler scientist at the SETI Institute in Mountain View, Calif., who is leading the analysis.

"The large number of multi-candidate systems being found by Kepler implies that a substantial fraction of exoplanets reside in flat multi-planet systems," said Jack Lissauer, planetary scientist at NASA's Ames Research Center in Moffett Field, Calif. "This is consistent with what we know about our own planetary neighborhood."

The Kepler space telescope identifies planet candidates by repeatedly measuring the change in brightness of more than 150,000 stars in search of planets that pass in front, or "transit," their host star. At least three transits are required to verify a signal as a potential planet.

"The analysis of increasingly longer time periods of Kepler data uncovers smaller planets in longer period orbits-- orbital periods similar to Earth's," said Steve Howell, Kepler mission project scientist at Ames. "It is no longer a question of will we find a true Earth analogue, but a question of when."

The complete list of Kepler planet candidates is available in an interactive table at the NASA Exoplanet Archive. The archive is funded by NASA's Exoplanet Exploration Program to collect and make public data to support the search for and characterization of exoplanets and their host stars.

The Space Telescope Science Institute in Baltimore archives, hosts and distributes the Kepler science data. Kepler is NASA's 10th Discovery Mission and is funded by NASA's Science Mission Directorate at the agency's headquarters in Washington.

JPL manages NASA's Exoplanet Exploration Program. The NASA Exoplanet Archive is hosted at the Infrared Processing and Analysis Center at the California Institute of Technology.

For information about the NASA Exoplanet Archive, visit: http://exoplanetarchive.ipac.caltech.edu/index.html

For information about the Kepler Mission, visit: http://www.nasa.gov/kepler