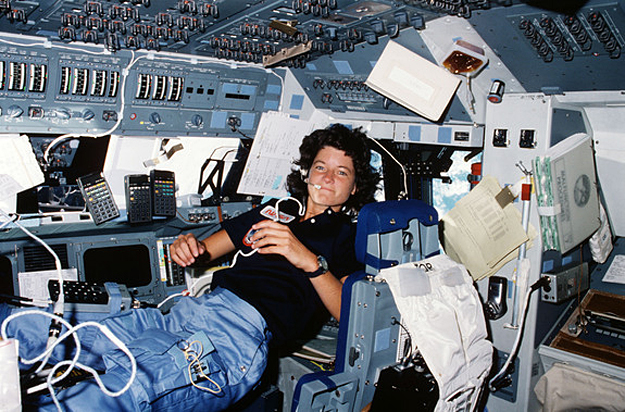 NASA has named the site where twin agency spacecraft impacted the moon Monday in honor of the late astronaut, Sally K. Ride, who was America's first woman in space and a member of the probes' mission team.

Last Friday, Ebb and Flow, the two spacecraft comprising NASA's Gravity Recovery and Interior Laboratory (GRAIL) mission, were commanded to descend into a lower orbit that would result in an impact Monday on a mountain near the moon's north pole. The formation-flying duo hit the lunar surface as planned at 2:28:51 p.m. PST (5:28:51 p.m. EST) and 2:29:21 p.m. PST (5:29:21 p.m. EST) at a speed of 3,760 mph (1.7 kilometers per second). The location of the Sally K. Ride Impact Site is on the southern face of an approximately 1.5 mile- (2.5 -kilometer) tall mountain near a crater named Goldschmidt.

"Sally was all about getting the job done, whether it be in exploring space, inspiring the next generation, or helping make the GRAIL mission the resounding success it is today," said GRAIL principal investigator Maria Zuber of the Massachusetts Institute of Technology in Cambridge. "As we complete our lunar mission, we are proud we can honor Sally Ride's contributions by naming this corner of the moon after her."

The impact marked a successful end to the GRAIL mission, which was NASA's first planetary mission to carry cameras fully dedicated to education and public outreach. Ride, who died in July after a 17-month battle with pancreatic cancer, led GRAIL's MoonKAM (Moon Knowledge Acquired by Middle School Students) Program through her company, Sally Ride Science, in San Diego.

Along with its primary science instrument, each spacecraft carried a MoonKAM camera that took more than 115,000 total images of the lunar surface. Imaging targets were proposed by middle school students from across the country and the resulting images returned for them to study. The names of the spacecraft were selected by Ride and the mission team from student submissions in a nationwide contest.

"Sally Ride worked tirelessly throughout her life to remind all of us, especially girls, to keep questioning and learning," said Sen. Barbara Mikulski of Maryland. "Today her passion for making students part of NASA's science is honored by naming the impact site for her."


Fifty minutes prior to impact, the spacecraft fired their engines until the propellant was depleted. The maneuver was designed to determine precisely the amount of fuel remaining in the tanks. This will help NASA engineers validate computer models to improve predictions of fuel needs for future missions.

"Ebb fired its engines for 4 minutes, 3 seconds and Flow fired its for 5 minutes, 7 seconds," said GRAIL project manager David Lehman of NASA's Jet Propulsion Laboratory (JPL) in Pasadena, Calif. "It was one final important set of data from a mission that was filled with great science and engineering data."

The mission team deduced that much of the material aboard each spacecraft was broken up in the energy released during the impacts. Most of what remained probably is buried in shallow craters. The craters' size may be determined when NASA's Lunar Reconnaissance Orbiter returns images of the area in several weeks.

Launched in September 2011, Ebb and Flow had been orbiting the moon since Jan. 1, 2012. The probes intentionally were sent into the lunar surface because they did not have sufficient altitude or fuel to continue science operations. Their successful prime and extended science missions generated the highest resolution gravity field map of any celestial body. The map will provide a better understanding of how Earth and other rocky planets in the solar system formed and evolved.

"We will miss our lunar twins, but the scientists tell me it will take years to analyze all the great data they got, and that is why we came to the moon in the first place," Lehman said. "So long, Ebb and Flow, and we thank you."