Students Exploring the Universe with a Radio Telescope 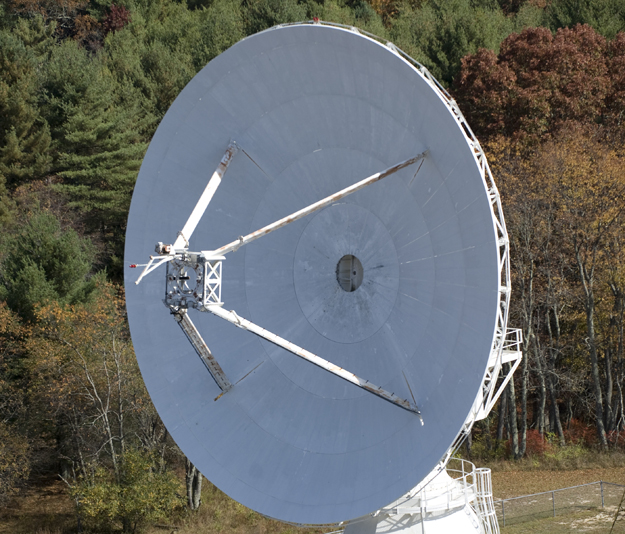 A new program is giving middle-school-aged youth the chance to take remote control of a large, research-grade radio telescope and expand their cosmic explorations beyond what the eye can see. The National Radio Astronomy Observatory's (NRAO) 20-meter-diameter telescope in Green Bank, West Virginia, is joining a global network of telescopes bringing the excitement of hands-on research to young people via 4-H, the nation's largest youth development organization.

The program, funded by the National Science Foundation, will provide some 1,400 4-H youth with access to robotically-operated, research-grade telescopes. They will use the telescopes to survey galaxies, track asteroids, monitor variable stars, and learn first-hand how scientific research is done.

The telescopes are part of a world-wide network called Skynet. In addition to the NRAO 20-meter radio telescope, the network also includes a 24-inch optical telescope at the University of North Carolina's Morehead Observatory; the 41-inch reflecting telescope at Yerkes Observatory in Williams Bay, Wisconsin; six telescopes in Chile; and six more under construction in Chile and Australia.

When the telescopes are not performing their primary scientific mission of observing gamma-ray bursts, they can be used for educational purposes. The new program, called Skynet Junior Scholars, will train 140 4-H leaders and other informal educators in West Virginia, North Carolina, and Wisconsin. These leaders will then assist their 4-H club members in observing cosmic objects with the telescopes. Along the way they will be mentored by Skynet Junior Scholars staff and the scientists who use Skynet telescopes for their own research.

The NRAO 20-meter telescope is the only radio telescope in the network, providing a unique capability for the young observers' research. "Much of today's professional astronomical research is multi-wavelength, with scientists using combinations of radio, optical, infrared, or other telescopes to gain a complete picture of the objects they study. Adding our 20-meter telescope to Skynet gives students the same ability and provides them with a better understanding of modern research," said NRAO astronomer Glen Langston, who serves as the 20-meter telescope Project Scientist.

"Students really get jazzed when they experience the role of being a scientist first-hand. The 20-meter telescope allows us to provide that experience to anyone, anywhere," said NRAO Education Officer Sue Ann Heatherly. "When a student realizes that he or she can successfully do science, it can be a game changer. Students are actually more likely to pursue STEM careers. 4-H recognizes the need for more scientists and engineers in the U.S. and so does NRAO. We want to do our part."

Heatherly is one of three principal investigators for the Skynet Junior Scholars program, along with colleagues from the University of North Carolina and The University of Chicago's Yerkes Observatory. Under the program, which formally began October 1, 4-H club leaders may complete free professional-development workshops at NRAO in Green Bank, at Yerkes Observatory, or online through the Astronomical Society of the Pacific.