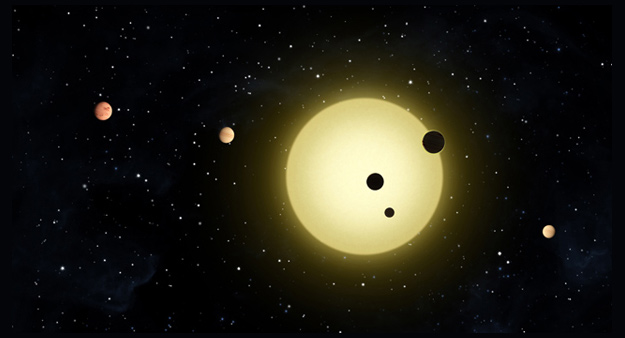 NASA is marking two milestones in the search for planets like Earth -- the successful completion of the Kepler Space Telescope's 3 1/2- year prime mission and the beginning of an extended mission that could last as long as four years.

Scientists have used Kepler data to identify more than 2,300 planet candidates and confirm more than 100 planets - teaching us that the galaxy is teeming with planetary systems, that planets are prolific, and hints that nature makes small planets efficiently.

So far, hundreds of Earth-size planet candidates have been found as well as candidates that orbit in the habitable zone, the region in a planetary system where liquid water might exist on the surface of a planet. None of the candidates is exactly like Earth. With the completion of the prime mission, Kepler has now collected enough data to begin finding true sun-Earth analogs -- Earth-size planets with a one-year orbit around stars similar to the sun.

"The initial discoveries of the Kepler mission indicate that at least a third of the stars have planets and that the number of planets in our galaxy must number in the billions," said William Borucki, Kepler principal investigator at NASA's Ames Research Center in Moffett Field, Calif. "The planets of greatest interest are other Earths and these could already be in the data awaiting analysis. Kepler's most exciting results are yet to come!"

NASA's Kepler Space Telescope searches for planet candidates orbiting distant suns, or exoplanets, by continuously measuring the brightness of more than 150,000 stars. When a planet candidate passes, or transits, in front of the star from the spacecraft's vantage point, light from the star is blocked. Different sized planets block different amounts of starlight. The amount of starlight blocked by a planet reveals its size relative to its star.

Kepler was launched March 6, 2009. Its mission was to survey a portion of the galaxy to determine what fraction of stars might harbor potentially habitable, Earth-sized planets. Planets orbiting in or near habitable zones are of particular interest.

Kepler began the search for small worlds like our own on May 12, 2009, after two months of commissioning. Within months, five exoplanets, known as hot Jupiters because of their enormous size and orbits close to their stars, were confirmed.

Kepler's exquisitely precise photometer, or light sensor, is designed to detect minute changes in brightness, to indicate an Earth-size planet. For a remote observer, Earth transiting the sun would dim its light by only 84 parts per million. That is less than 1/100th of one percent, or the equivalent of the amount of light blocked by a gnat crawling across a car's headlight viewed from several miles away.

Transit data are rich with information. By measuring the depth of the dip in brightness and knowing the size of the star, scientists can determine the size or radius of the planet. The time the planet takes to orbit can be determined by measuring the elapsed time between transits. Once the period is known, Kepler's Third Law of Planetary Motion can be applied to determine the average distance of the planet from its star. Using this distance, and the temperature and size of the star, scientists can determine if the planet is in the habitable zone.

Results from Kepler data continue to expand our understanding of planets and planetary systems. Highlights from the prime mission include:

"Kepler's bounty of new planet discoveries, many quite different from anything found previously, will continue to astound. But to me, the most wonderful discovery of the mission has not been individual planets, but the systems of two, three, even six planets crowded close to their stars, and, like the planets orbiting about our sun, moving in nearly the same plane," said Jack Lissauer, planetary scientist at Ames. "Like people, planets interact with and can be greatly affected by their neighbors. What are the neighborhoods of Earth-size exoplanets like? This is the question that I most hope Kepler will answer in the years to come."

In April 2012, NASA awarded Kepler an extended mission, through as late as 2016. More time will enable the continued search for worlds like our own -- worlds that are not too far and too close to their sun.

"The Earth isn't unique, nor the center of the universe. The diversity of other worlds is greater than depicted in all the science fiction novels and movies," said Geoff Marcy, professor of astronomy at the University of California, Berkeley. "Aristotle would be proud of us for answering some of the most profound philosophical questions about our place in the universe."