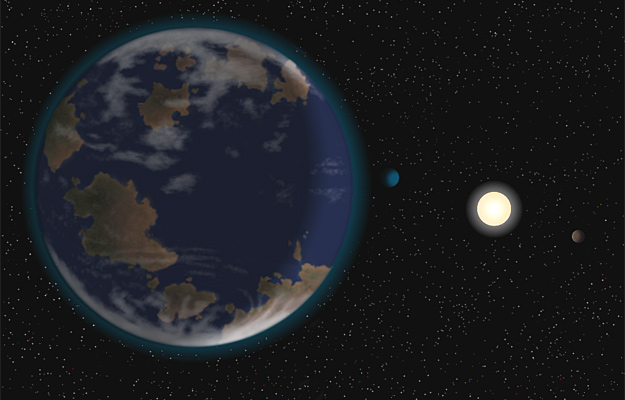 Washington, D.C.--Astronomers have discovered a new super-Earth in the habitable zone, where liquid water and a stable atmosphere could reside, around the nearby star HD 40307. It is one of three new super-Earths found around the star that has three other low-mass planets orbiting it.

HD 40307 is a dwarf star that is somewhat smaller and less luminous than the Sun that is about 42 light years away (12.88 parsecs). The previously discovered planets around it are called hot super-Earths because they orbit too close to the star to support life.

The international team, including Carnegie co-author Paul Butler, was led by Mikko Tuomi of the University of Hertfordshire and Guillem Anglada-Escude of the University of Goettingen. The researchers used newly developed software that is able to process the signals more thoroughly and thereby reveal the presence of the three additional planets. The team reanalyzed spectra taken with the HARPS spectrograph through the European Southern Observatory public archive.

Butler explained: "With Guillem Anglada-Escude's new velocity reduction package, we are able to extract more information from the HARPS spectra, and thus make a more precise measurement. This coupled with the innovative Bayesian orbital searching algorithm, primarily written by Mikko Tuomi, allows us to search deeper into the data and to find smaller Earth-sized planets around the nearest stars. This, of course, increases our chances of finding more in that orbital sweet spot that we call the habitable zone--the zone where it is not too cold, nor too hot for liquid water to exist." Anglada-Escude wrote the velocity reduction package while he was a postdoctoral fellow at Carnegie.

The most interesting of the new planets is in the outermost orbit from the star, a distance that is similar to the distance between the Earth and our Sun. Its mass is at least seven times the mass of the Earth. The team said the planet is likely to be rotating on its axis while in orbit, possibly creating a day/night cycle and an Earth-like environment.

"The star HD 40307 is a perfectly quiet old dwarf star, so there is no reason why such a planet could not sustain an Earth-like climate," said Anglada-Escude. The research will be published in Astronomy & Astrophysics and posted online at arxiv.org/archive/astro-ph.

The coauthors of the paper include R. Paul Butler of the Carnegie Institution for Science, Tuomi, Anglada-Escude, and Vogt, as well as Eugenio Rivera of UC Santa Cruz, Hugh Jones of the University of Hertfordshire, Enrico Gerlach of the Technical University of Dresden, and Ansgar Reiners of the University of Goettingen. This research was funded in part by RoPACS (Rocky Planets Around Cool Stars), a Marie Curie Initial Training Network funded by the European Commission; the German Ministry of Education and Research; the German Research Foundation (DFG); and the U.S. National Science Foundation (NSF grant AST-0307493). The researchers acknowledged the significant efforts of the HARPS-ESO team in improving the instrument and its data reduction pipelines and obtaining the observations that made this work possible.

The Carnegie Institution for Science (carnegiescience.edu) is a private, nonprofit organization headquartered in Washington, D.C., with six research departments throughout the U.S. Since its founding in 1902, the Carnegie Institution has been a pioneering force in basic scientific research. Carnegie scientists are leaders in plant biology, developmental biology, astronomy, materials science, global ecology, and Earth and planetary science.