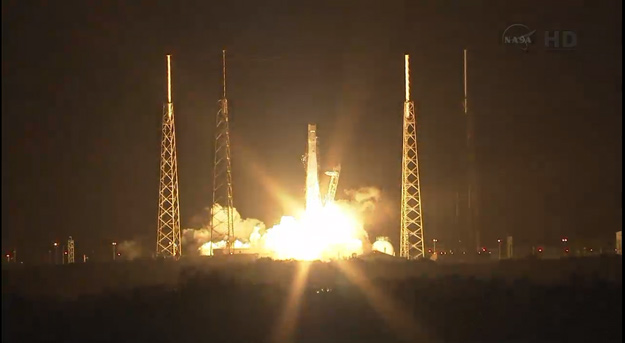 The SpaceX CRS-1 mission marks the first of at least 12 SpaceX missions to the space station under the company's cargo resupply contract with NASA. On board the Dragon spacecraft are materials to support investigations planned for the station's Expedition 33 crew, as well as crew supplies and space station hardware.

Dragon - the only space station cargo craft capable of returning a significant amount of supplies back to Earth -- will return with scientific materials and space station hardware.

The Falcon 9 rocket, powered by nine Merlin engines, performed nominally today during every phase of its approach to orbit, including two stage separations, solar array deployment, and the final push of Dragon into its intended orbit. Dragon will now chase the space station before beginning a series of burns that will bring it into close proximity to the station. If all goes well, Dragon will attach to the complex on October 10 and spend over two weeks there before an expected return to Earth on October 28.

"We are right where we need to be at this stage in the mission," said Elon Musk, CEO and Chief Technical Officer, SpaceX. "We still have a lot of work to do, of course, as we guide Dragon's approach to the space station. But the launch was an unqualified success."

The CRS-1 mission follows a historic demonstration flight last May when SpaceX's Dragon became the first commercial spacecraft to attach to the space station, exchange cargo, and return safely to Earth. The flight signaled restoration of American capability to resupply the space station, not possible since the retirement of the space shuttle in 2011.

About SpaceX SpaceX designs, manufactures, and launches the world's most advanced rockets and spacecraft. The company was founded in 2002 by Elon Musk to revolutionize space transportation, with the ultimate goal of enabling people to live on other planets. Today, SpaceX is advancing the boundaries of space technology through its Falcon launch vehicles and Dragon spacecraft. SpaceX is a private company owned by management and employees, with minority investments from Founders Fund, Draper Fisher Jurvetson, and Valor Equity Partners. The company has more than 1,800 employees in California, Texas, Washington, D.C., and Florida. For more information, visit SpaceX.com.