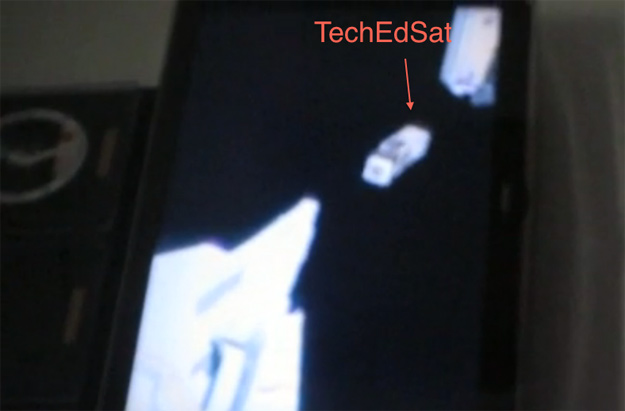 NASA engineers, student interns and amateur radio enthusiasts around the world are listening for signals from a small, cube-shaped satellite launched into orbit from the International Space Station Thursday.

The satellite, dubbed "TechEdSat," was released at 11:44 a.m. EDT from the new Japanese Small Satellite Orbital Deployer aboard the space station.

TechEdSat measures about 4 inches (10 centimeters) on a side and carries a ham radio transmitter. It was developed by a group of student interns from San Jose State University (SJSU) in California with mentoring and support from staff at NASA's Ames Research Center in Moffett Field, Calif. TechEdSat arrived at the space station aboard the Japanese H-II Transfer Vehicle July 21 and the station's Expedition 33 crew processed it for launch.

"TechEdSat will evaluate plug-and-play technologies, like avionics designed by commercial providers, and will allow a group of very talented aerospace engineering students from San Jose State University to experience a spaceflight project from formulation through decommission of a small spacecraft," said Ames Director S. Pete Worden.

TechEdSat's mission showcases collaboration among NASA, academia and industry to set the standard for future endeavors with small satellites known as Cubesats.

TechEdSat is funded by Ames and NASA's Space Technology Program. The total cost was less than $30,000 because engineers used only commercial off-the-shelf hardware and simplified the design and mission objectives.

For more about TechEdSat, visit SJSU's site about the mission: http://www.techedsat.com