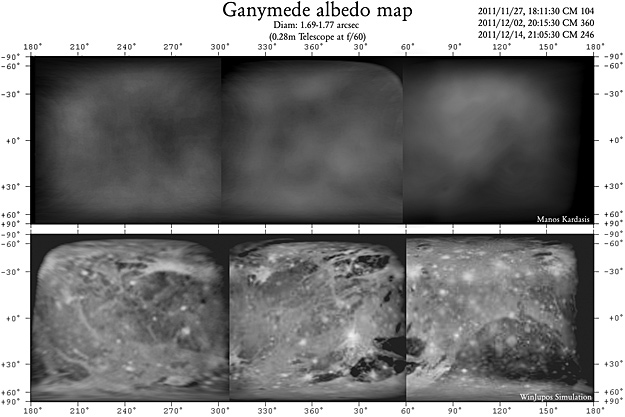 Technology has radically changed the contributions that amateurs can make to the field of astronomy. Using a readily-available 'hobby' telescope, off-the-shelf camera and computer equipment, plus experienced observing skills, Emmanuel I. Kardasis of the Hellenic Amateur Astronomy Association has produced the first amateur albedo map of Jupiter's moon Ganymede. This demonstration has implications for the future role of amateur astronomers. The work will be presented at the European Planetary Science Congress in Madrid.

An albedo map details higher areas of reflectivity on an object's surface recording where material is brighter or darker. Kardasis' albedo map closely aligns with professional images of Ganymede's surface, indicating features such as Phrygia Sulcus (furrows and ridges 3700km across) and the Nicholson region (a low-lying darker area).

Kardasis explains, "Ganymede has a tiny disk as seen from Earth so was a good test for my techniques. If the same methods were applied to other worlds, perhaps the volcanic moon Io, we could capture surface fluctuations. Professional observatories may create better images but they cannot monitor our rapidly and ever-changing Universe." 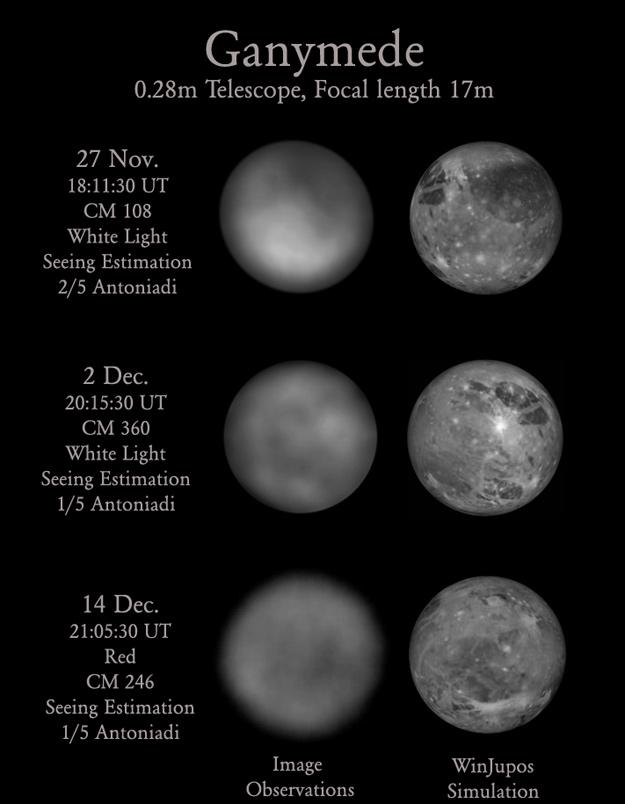 To produce the images Kardasis attached a camera to his telescope and recorded a video of Ganymede. Selecting only the sharpest frames of the video allowed him to obtain a series of images when the atmospheric conditions - known as 'seeing' - were most favourable. These best images were then stacked and aligned, before being enhanced through photo-editing software.

The equipment required for amateurs to make valuable contributions is relatively easy to obtain. Kardasis says, "Creating useful images of planets requires a telescope with a diameter of at least eight inches. For tiny discs, such as the moons of Jupiter, bigger is definitely better. My Ganymede images were made using an 11-inch telescope. You also need a good motor drive on your tripod, a sensitive camera, some freely-available software, and lots of patience!"

Future amateur programs could monitor both surface and atmospheric changes on worlds as varied as Uranus, Neptune and Titan, complementing more detailed but far less regular observations made by professionals. Kardasis says, "I hope my work will inspire anyone interested in astronomy to use whatever equipment they have to make useful observations."

The original observations (top) and interpretations (bottom) of the first ever amateur albedo map of Ganymede. Credit: Manos Kardasis. http://www.europlanet-eu.org/outreach/images/stories/epsc2012/1_ganymede.jpg