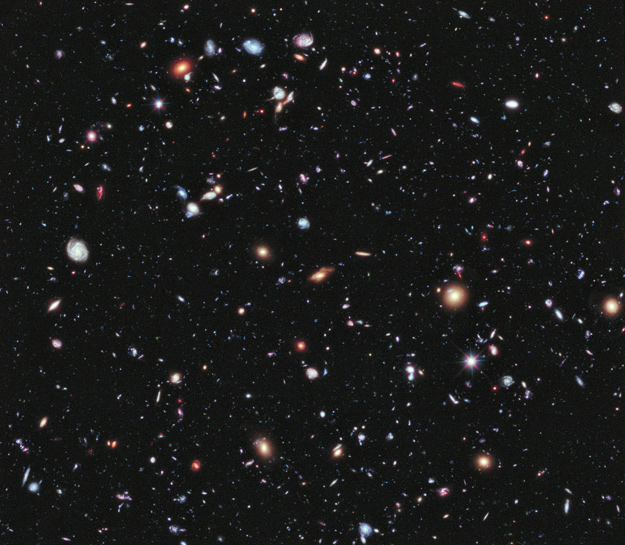 Like photographers assembling a portfolio of best shots, astronomers have assembled a new, improved portrait of mankind's deepest-ever view of the universe.

Called the eXtreme Deep Field, or XDF, the photo was assembled by combining 10 years of NASA Hubble Space Telescope photographs taken of a patch of sky at the center of the original Hubble Ultra Deep Field. The XDF is a small fraction of the angular diameter of the full moon.

The Hubble Ultra Deep Field is an image of a small area of space in the constellation Fornax, created using Hubble Space Telescope data from 2003 and 2004. By collecting faint light over many hours of observation, it revealed thousands of galaxies, both nearby and very distant, making it the deepest image of the universe ever taken at that time.

The new full-color XDF image is even more sensitive, and contains about 5,500 galaxies even within its smaller field of view. The faintest galaxies are one ten-billionth the brightness of what the human eye can see.

Magnificent spiral galaxies similar in shape to our Milky Way and the neighboring Andromeda galaxy appear in this image, as do the large, fuzzy red galaxies where the formation of new stars has ceased. These red galaxies are the remnants of dramatic collisions between galaxies and are in their declining years. Peppered across the field are tiny, faint, more distant galaxies that were like the seedlings from which today's magnificent galaxies grew. The history of galaxies -- from soon after the first galaxies were born to the great galaxies of today, like our Milky Way -- is laid out in this one remarkable image.

Hubble pointed at a tiny patch of southern sky in repeat visits (made over the past decade) for a total of 50 days, with a total exposure time of 2 million seconds. More than 2,000 images of the same field were taken with Hubble's two premier cameras: the Advanced Camera for Surveys and the Wide Field Camera 3, which extends Hubble's vision into near-infrared light. 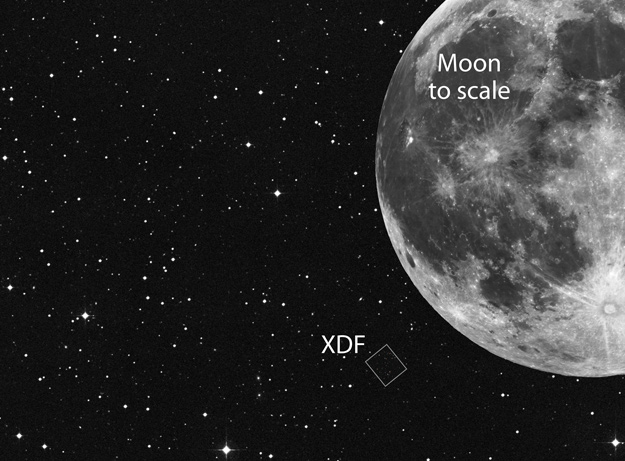 This illustration compares the angular size of the XDF field to the angular size of the full moon. A finger held at arm's length would appear to be about twice the width of the moon in this image. Note that this illustration does not show the actual observation of the XDF relative to the location of the moon. (Illustration Credit: NASA; ESA; and Z. Levay, STScI; Moon Image Credit: T. Rector; I. Dell'Antonio/NOAO/AURA/NSF)
>Larger image

"The XDF is the deepest image of the sky ever obtained and reveals the faintest and most distant galaxies ever seen. XDF allows us to explore further back in time than ever before", said Garth Illingworth of the University of California at Santa Cruz, principal investigator of the Hubble Ultra Deep Field 2009 (HUDF09) program.

The universe is 13.7 billion years old, and the XDF reveals galaxies that span back 13.2 billion years in time. Most of the galaxies in the XDF are seen when they were young, small, and growing, often violently as they collided and merged together. The early universe was a time of dramatic birth for galaxies containing brilliant blue stars extraordinarily brighter than our sun. The light from those past events is just arriving at Earth now, and so the XDF is a "time tunnel into the distant past." The youngest galaxy found in the XDF existed just 450 million years after the universe's birth in the big bang.

Before Hubble was launched in 1990, astronomers could barely see normal galaxies to 7 billion light-years away, about halfway across the universe. Observations with telescopes on the ground were not able to establish how galaxies formed and evolved in the early universe.

Hubble gave astronomers their first view of the actual forms and shapes of galaxies when they were young. This provided compelling, direct visual evidence that the universe is truly changing as it ages. Like watching individual frames of a motion picture, the Hubble deep surveys reveal the emergence of structure in the infant universe and the subsequent dynamic stages of galaxy evolution.

The infrared vision of NASA's planned James Webb Space Telescope will be aimed at the XDF. The Webb telescope will find even fainter galaxies that existed when the universe was just a few hundred million years old. Because of the expansion of the universe, light from the distant past is stretched into longer, infrared wavelengths. The Webb telescope's infrared vision is ideally suited to push the XDF even deeper, into a time when the first stars and galaxies formed and filled the early "dark ages" of the universe with light.

The Hubble Space Telescope is a project of international cooperation between NASA and the European Space Agency. NASA's Goddard Space Flight Center in Greenbelt, Md., manages the telescope. The Space Telescope Science Institute (STScI) in Baltimore, Md., conducts Hubble science operations. STScI is operated by the Association of Universities for Research in Astronomy, Inc., in Washington.
Related Link

More on the Hubble eXtreme Deep Field from HubbleSite.org