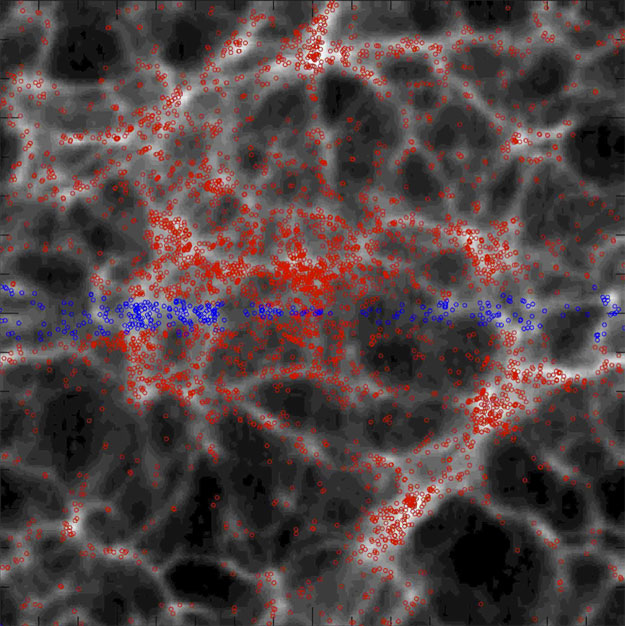 Astronomers in Germany have developed an artificial intelligence algorithm to help them chart and explain the structure and dynamics of the universe around us with unprecedented accuracy. The team, led by Francisco Kitaura of the Leibniz Institute for Astrophysics in Potsdam, report their results in the journal Monthly Notices of the Royal Astronomical Society.

Scientists routinely use large telescopes to scan the sky, mapping the coordinates and estimating the distances of hundreds of thousands of galaxies and so enabling them to create a map of the large-scale structure of the universe. But the distribution that astronomers see is intriguing and hard to explain, with galaxies forming a complex 'cosmic web' showing clusters, filaments connecting them, and large empty regions in between.

The driving force for such a rich structure is gravitation. This force originates from two components; firstly the 5% of the universe that appears to be made of 'normal' matter that makes up the stars, planets, dust and gas we can see and secondly the 23% made up of invisible 'dark' matter. Alongside these some 72% of the cosmos is made up of a mysterious 'dark energy' that rather than exerting a gravitational pull is thought to be responsible for accelerating the expansion of the universe. Together these three constituents are described in the Lambda Cold Dark Matter (LCDM) model for the cosmos, the starting point for the work of the Potsdam team.

Measurements of the residual heat from the Big Bang -- the so-called Cosmic Microwave Background Radiation or CMBR emitted 13,700 million years ago -- allow astronomers to determine the motion of the Local Group, the cluster of galaxies that includes the Milky Way, the galaxy we live in. Astronomers try to reconcile this motion with that predicted by the distribution of matter around us and its associated gravitational force, but this is compromised by the difficulty of mapping the dark matter in the same region.

"Finding the dark matter distribution corresponding to a galaxy catalogue is like trying to make a geographical map of Europe from a satellite image during the night that only shows the light coming from dense populated areas", says Dr. Kitaura.

To try to solve this problem he developed a new algorithm based on artificial intelligence (AI). It starts with the fluctuations in the density of the universe seen in the CMBR, then models the way that matter collapses into today's galaxies over the subsequent 13 billion years. The results of the AI algorithm are a close fit to the observed distribution and motion of galaxies.

Dr. Kitaura comments, "Our precise calculations show that the direction of motion and 80% of the speed of the galaxies that make up the Local Group can be explained by the gravitational forces that arise from matter up to 370 million light-years away. In comparison the Andromeda Galaxy, the largest member of the Local Group, is a mere 2.5 million light-years distant so we are seeing how the distribution of matter at great distances affects galaxies much closer to home.

"Our results are also in close agreement with the predictions of the LCDM model. To explain the rest of the 20% of the speed, we need to consider the influence of matter up to about 460 million light-years away, but at the moment the data are less reliable at such a large distance.

"Despite this caveat, our model is a big step forward. With the help of AI, we can now model the universe around us with unprecedented accuracy and study how the largest structures in the cosmos came into being."

The Royal Astronomical Society (RAS, http://www.ras.org.uk), founded in 1820, encourages and promotes the study of astronomy, solar-system science, geophysics and closely related branches of science. The RAS organizes scientific meetings, publishes international research and review journals, recognizes outstanding achievements by the award of medals and prizes, maintains an extensive library, supports education through grants and outreach activities and represents UK astronomy nationally and internationally. Its more than 3,500 members (Fellows), a third based overseas, include scientific researchers in universities, observatories and laboratories as well as historians of astronomy and others. Follow the RAS on Twitter via @royalastrosoc

The key areas of research at the Leibniz Institute for Astrophysics (Astrophysics Institute Potsdam, AIP) are cosmic magnetic fields and extragalactic astrophysics. A considerable part of the Institute's efforts aim at the development of research technology in the fields of spectroscopy, robotic telescopes, and e-science. The AIP is the successor of the Berlin Observatory founded in 1700 and of the Astrophysical Observatory of Potsdam founded in 1874. The latter was the world's first observatory to emphasize explicitly the research area of astrophysics. The AIP has been a member of the Leibniz Association since 1992.