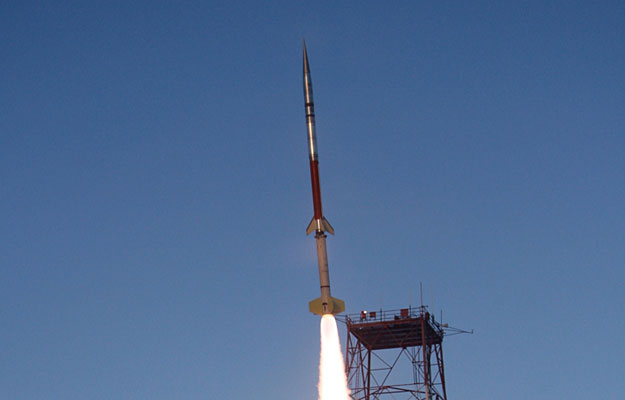 Launched at 7:16:30 a.m. EDT, the rocket lofted the experiments to an altitude of 95.4 miles. The experiments have been recovered from the Atlantic Ocean and they will be delivered to the university teams this afternoon at Wallops.

The launch was part of the RockSat-X educational project, which is designed to provide students hands-on experience in designing, fabricating, testing and conducting experiments for space flight. The project is a joint effort between NASA and the Colorado Space Grant Consortium.

The participating schools for this year's RockSat-X launch are from Baylor University in Waco, Texas; University of Colorado at Boulder; the University of Puerto Rico; and Virginia Polytechnic Institute and State University (Virginia Tech) in Blacksburg.

The University of Puerto Rico flew a mass spectrometer to conduct an analysis of atmospheric particles and pressure. Virginia Tech and Baylor universities teamed up to measure nitric oxide and atmospheric dust. The University of Colorado at Boulder is testing a device to assist in de-orbiting small spacecraft and the Colorado Space Grant Consortium flew seven cameras to capture all the action in high definition. The next launch from the Wallops Flight Facility is scheduled between 7 and 10 a.m. EDT, Saturday, September 22.

This will be the first flight of the NASA Talos-Terrier-Oriole which is being developed, using motors that currently exist in the sounding rocket fleet, to support high altitude space science research.

The 3-stage, 65-foot tall vehicle is projected to lift its 1,664 pound payload to approximately 176 miles above the Earth. After a 10 minute flight, the payload is expected land in the Atlantic Ocean about 300 miles off the Wallops Island coast. The payload will not be recovered.

The NASA Visitor Center at the Wallops Flight Facility will open at 6 a.m. on launch day for public viewing.

The mission will be available live on Ustream beginning at 6 a.m. on launch day at: http://www.ustream.tv/channel/nasa-wallops