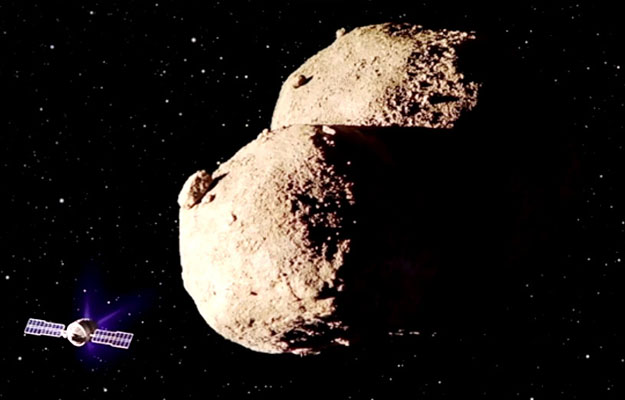 In June, the B612 Foundation unveiled its plans to build, launch, and operate the first privately funded deep space mission, a space telescope to be placed in orbit around the Sun, up to 170 million miles from Earth, for a mission of asteroid discovery and mapping. This premier scientific instrument not only will provide millions of asteroid discoveries, but also help us prevent a major asteroid impact on Earth. Sentinel will detect and track asteroids accurately enough to give decades of warning of impending impacts to allow humanity to easily deflect threatening asteroids using existing technology.

To date, only about one percent of the nearly one million asteroids that could potentially hit Earth with devastating consequences have been observed and tracked. In just the first few weeks of operation, Sentinel will surpass this total, and during five years of operation will track 100 times more asteroids than have been found by all other telescopes throughout history combined.

"Sentinel's mission - to protect our Earth and provide a future map for exploration - has drawn supporters from around the world who want to make a difference and be part of this mission," said Ed Lu, B612 Foundation CEO and former astronaut and Google executive. "Our Founding Circle members are making this mission a reality."

New members of the B612 Foundation Founding Circle:

Steve Krausz, General Partner, US Venture Partners. With a background in IT, security and "big data" software, and many years of operating experience with NASA and a number of Silicon Valley start-ups, Steve has led USVP investments in multiple companies and co-led USVP's investments and/or IPOs. Previously, he served on the board of the Woodside Priory and was Treasurer of the National Venture Capital Association. Steve currently serves on the Board of Trustees of the World Affairs Council, Stanford GSB Trust, and DAPER.

Shervin Pishevar, Managing Partner, Menlo Ventures, invests in social web, consumer Internet and mobile systems, and helped launch the Menlo Talent Fund, a new $20m seed fund. Previously, he was Chief Application Officer and GM at Mozilla Corporation, after spending most of his career as a serial entrepreneur and angel investor. He is one of 10 members of the UN Foundation's Global Entrepreneurs Council, and serves as an Entrepreneurial Ambassador on several State Department delegations, and on the President's Summit on Entrepreneurship. Among his many humanitarian efforts, he volunteers with Invisible Children and charity:water.

The B612 Foundation also has received generous support from:

The William K. Bowes, Jr. Foundation, San Francisco, California, supports nonprofit organizations in several areas, including (but not exclusively) medical research, access to college, the arts and higher education and the environment.

New Members of the B612 Strategic and Science Advisory Board

Ed Lu also announced five new members to the B612 Science and Strategic Advisory Board: "The role of the Advisory Council is to shape our thinking with constructive input and provide us with new innovative solutions and novel approaches to our achieving our mission. We want our board to be more than a collection of experts, we want them to challenge our thinking."

Alexander Singer, Humanitas and Emmy Award Winner, Director/Producer, has directed five feature films, including Star Trek, more than 280 television shows, and has taught both production and directing at universities and other institutions He published white papers for the National Research Council, which later designated Singer a lifetime National Associate of the National Academy of Sciences. In addition, Singer has presented at three DARPA Information Science and Technology study groups: "Building a Time Machine," "Total Recall: Combining Human and Digital Memory," and "Augmented Cognition," - the last evolving into a short dramatic film: "The Future of Augmented Cognition."

Roger Blandford, Astrophysicist, Professor and Researcher, earned BA, MA and PhD degrees at Cambridge University, with postdoctoral research at Cambridge, Princeton and UC/Berkeley. Subsequently, he took a faculty position at Caltech, where he was appointed the Richard Chace Tolman Professor of Theoretical Astrophysics. In 2003, he moved to Stanford to become the first Director of the Kavli Institute for Particle Astrophysics and Cosmology and the Luke Blossom Chair in the School of Humanities and Science. His research includes black hole astrophysics, cosmology, gravitational lensing, cosmic ray physics and compact stars. He is a Fellow of the Royal Society, the American Academy of Arts and Sciences, the American Physical Society and a Member of the National Academy of Sciences. He recently chaired a two-year National Academy of Sciences Decadal Survey of Astronomy and Astrophysics.

Taghi Amirani, Filmmaker, TED Senior Fellow, studied physics at Nottingham University, where for his final year project, he produced Shades of Black, a documentary about an imaginary journey into a black hole. At the University of Bristol, he made Mechanics of Love., and made his directorial debut with Earth Calling Basingstoke, a look at the extraterrestrial lives of English amateur astronomers. He has since made nearly 40 films, two fiction shorts, and a handful of commercials. For the BBC, he made The Jupiter Collision, documenting the historic impact of Comet Shoemaker-Levy 9 into planet Jupiter, which followed the discoverers of the comet with the Hubble team at the Space Telescope Science Institute. Taghi has served as a jury member at the International Emmys, Royal Television Society, One World Media Awards and Sheffield International Documentary Festival. In 2009, he was awarded a TED Fellowship followed by a TED Senior Fellowship in 2010.

Founding Circle members Shervin Pensevar and Steve Krausz (profiled above) also were named to the Strategic and Science Advisory Board.

The B612 Foundation aims to build, launch, and operate the world's first privately funded deep space telescope mission to create the first comprehensive dynamic map of our inner solar system, identifying the current and future locations and trajectories of Earth crossing asteroids. The B612 Foundation believes that humanity can harness the power of science and technology to protect the future of civilization on this planet, while extending our reach into the solar system. Ball Aerospace, Boulder, CO, will design and build the Sentinel Space Telescope, with the same expert team that built the Spitzer and Kepler Space Telescopes. Sentinel will be ready for launch in 2017-2018. NASA will participate in this mission by enabling data to be collected and sent back to Earth via NASA's Deep Space Network, which also will be used for tracking and navigation.