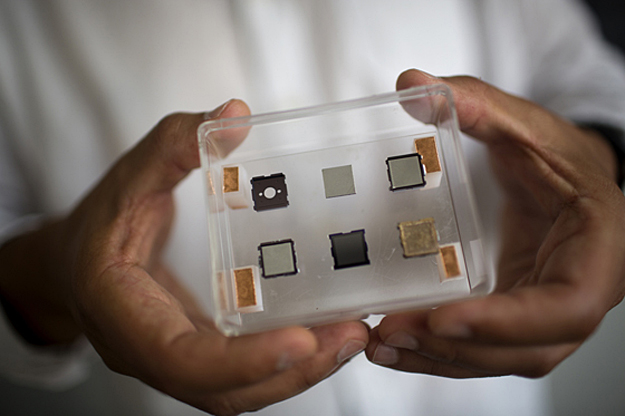 A penny-sized rocket thruster may soon power the smallest satellites in space. Mini ion thrusters are manufactured using micro-manufacturing techniques. This image shows an example of the different parts comprising a thruster. The finalized device is at the bottom right, measuring 1 cm by 1 cm and 2 mm in thickness. Photo: M. Scott Brauer

The device, designed by Paulo Lozano, an associate professor of aeronautics and astronautics at MIT, bears little resemblance to today's bulky satellite engines, which are laden with valves, pipes and heavy propellant tanks. Instead, Lozano's design is a flat, compact square -- much like a computer chip -- covered with 500 microscopic tips that, when stimulated with voltage, emit tiny beams of ions. Together, the array of spiky tips creates a small puff of charged particles that can help propel a shoebox-sized satellite forward.

"They're so small that you can put several [thrusters] on a vehicle," Lozano says. He adds that a small satellite outfitted with several microthrusters could "not only move to change its orbit, but do other interesting things -- like turn and roll."

Lozano and his group in MIT's Space Propulsion Laboratory and Microsystems Technology Laboratory presented their new thruster array at the American Institute of Aeronautics and Astronautics' recent Joint Propulsion Conference.

Today, more than two dozen small satellites, called CubeSats, orbit Earth. Each is slightly bigger than a Rubik's cube, and weighs less than three pounds. Their diminutive size classifies them as "nanosatellites," in contrast with traditional Earth-monitoring behemoths. These petite satellites are cheap to assemble, and can be launched into space relatively easily: Since they weigh very little, a rocket can carry several CubeSats as secondary payload without needing extra fuel.

But these small satellites lack propulsion systems, and once in space, are usually left to passively spin in orbits close to Earth. After a mission concludes, the satellites burn up in the lower atmosphere.

Lozano says if CubeSats were deployed at higher orbits, they would take much longer to degrade, potentially creating space clutter. As more CubeSats are launched farther from Earth in the future, the resulting debris could become a costly problem.

"These satellites could stay in space forever as trash," says Lozano, who is associate director of the Space Propulsion Laboratory. "This trash could collide with other satellites. ... You could basically stop the Space Age with just a handful of collisions."

Engineering propulsion systems for small satellites could solve the problem of space junk: CubeSats could propel down to lower orbits to burn up, or even act as galactic garbage collectors, pulling retired satellites down to degrade in Earth's atmosphere. However, traditional propulsion systems have proved too bulky for nanosatellites, leaving little space on the vessels for electronics and communication equipment.

In contrast, Lozano's microthruster design adds little to a satellite's overall weight. The microchip is composed of several layers of porous metal, the top layer of which is textured with 500 evenly spaced metallic tips. The bottom of the chip contains a small reservoir of liquid -- a "liquid plasma" of free-floating ions that is key to the operation of the device.

To explain how the thruster works, Lozano invokes the analogy of a tree: Water from the ground is pulled up a tree through a succession of smaller and smaller pores, first in the roots, then up the trunk, and finally through the leaves, where sunshine evaporates the water as gas. Lozano's microthruster works by a similar capillary action: Each layer of metal contains smaller and smaller pores, which passively suck the ionic liquid up through the chip, to the tops of the metallic tips.

The group engineered a gold-coated plate over the chip, then applied a voltage, generating an electric field between the plate and the thruster's tips. In response, beams of ions escaped the tips, creating a thrust. The researchers found that an array of 500 tips produces 50 micronewtons of force -- an amount of thrust that, on Earth, could only support a small shred of paper. But in zero-gravity space, this tiny force would be enough to propel a two-pound satellite.

Lozano and co-author Dan Courtney also found that very small increases in voltage generated a big increase in force among the thruster's 500 tips, a promising result in terms of energy efficiency.

"It means you have a lot of control with your voltage," Lozano says. "You don't have to increase a lot of voltage to attain higher current. It's a very small, modest increase."

Timothy Graves, manager of electric propulsion and plasma science at Aerospace Corp. in El Segundo, Calif., says the microthruster design stands out among satellite propellant systems for its size and low power consumption.

"Normally, propulsion systems have significant infrastructure associated with propellant feed lines, valves [and] complex power conditioning systems," says Graves, who was not involved in the research. "Additionally, the postage-stamp size of this thruster makes it easy to implement in comparison to other, larger propulsion systems."

The researchers envision a small satellite with several microthrusters, possibly oriented in different directions. When the satellite needs to propel out of orbit, onboard solar panels would temporarily activate the thrusters. In the future, Lozano predicts, microthrusters may even be used to power much larger satellites: Flat panels lined with multiple thrusters could propel a satellite through space, switching directions much like a rudder, or the tail of a fish.

"Just like solar panels you can aim at the sun, you can point the thrusters in any direction you want, and then thrust," Lozano says. "That gives you a lot of flexibility. That's pretty cool."