XCOR to establish operations and manufacturing base in Florida 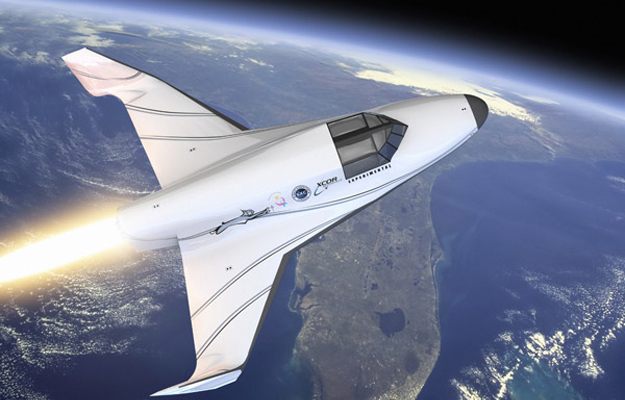 With the Kennedy Space Center Visitor Complex as a backdrop, dignitaries from the space industry, Florida elected officials, XCOR senior executives and the general public gathered to celebrate XCOR's plans to bring a Lynx suborbital vehicle to Florida to fly from Kennedy Space Center's Shuttle Landing Facility, the Cecil Field Spaceport, or other suitable Florida locations in the next two years. Should the full business plan of XCOR be realized, they will also commence assembly and factory test of Lynx production models - designed Lynx Mark II - on Florida's Space Coast, starting with Tail #3. Direct job creation through late 2018 is estimated at just over 150.

"As chair of Space Florida, this is the type of investment the Space Florida Board has been working on to attract high-tech, high-wage jobs to Florida," said Florida Lt. Governor Jennifer Carroll. "We are very pleased to welcome XCOR to Florida as a prime example of how utilizing Florida's existing infrastructure and leveraging our talented workforce capabilities can attract new and growing business to our state."

"The suborbital marketplace has significant potential and will serve as a key contributor to Florida's growth in the coming years," noted Space Florida President Frank DiBello. "We are pleased to be working with XCOR on their operations and manufacturing capabilities here and look forward to watching their Florida-based operations grow."

"Looking over the KSC Visitor Complex grounds and seeing the history of U.S. human spaceflight and realizing that soon XCOR will be a part of the fabric of the Space Coast is very exciting to me personally and our company" said Jeff Greason, XCOR CEO. "When we started the company back in 1999, we could only have dreamt about the possibility of flying the person on the street or the citizen scientist to space from such an important place." "Aerospace is a targeted sector for Florida's economic growth, therefore, XCOR's new base, manufacturing operation and subsequent jobs represent a significant win for our state," said Gray Swoope, president & CEO of Enterprise Florida Inc., the state's lead economic development organization. "This project also is the result of strong and effective teamwork between private and public sector partners on the local to state levels who are committed to helping businesses meet their needs and improving Florida's economy."

"The next era in space exploration is underway, and the Space Coast of Florida is ground zero in the Obama Administration's effort to launch Americans from U.S. soil and create good jobs that support an economy built to last," said NASA Chief of Staff David Radzanowski. "The region continues to be a key strategic location for companies, like XCOR, who want to build on our nation's great legacy of innovation and entrepreneurship."

"We have said many times that the Space Coast workforce holds the talent and expertise to not only launch, but also develop and manufacture next-generation spacecraft," said Lynda Weatherman, president & CEO of the Economic Development Commission of Florida's Space Coast. "We are pleased that XCOR recognizes this talent and sees the potential of locating manufacturing and launch operations here in Brevard County."

Plans call for XCOR to commence initial operations from a Florida location in 2014 when they plan on bringing the Lynx Mark I prototype for demonstration and pathfinder flights. This will be followed by the basing of a Lynx Mark II production vehicle in Florida, and eventually production of Lynx vehicles and other XCOR products should market demand materialize and the emerging commercial space industry maintain its current momentum.

XCOR's Chief Operating Officer Andrew Nelson noted, "The Space Coast has seen a slow wind down of legacy space operations in the past few years, but the new commercial space industry will return high paying aerospace jobs and human spaceflight back to Florida in the very near future, with several scheduled flights a day! We foresee significant positive impacts on the creation of technology clusters and educational opportunities for K-12 and college students."

About XCOR Aerospace: XCOR Aerospace is based in Mojave, California. It is currently starting the process to create a new Research and Development Center in Midland, Texas. XCOR builds safe, reliable and reusable rocket-powered vehicles, propulsion systems, advanced non-flammable composites and rocket piston pumps.XCOR works with aerospace prime contractors and government customers on major propulsion systems, while also building Lynx. Lynx is a piloted, two-seat, fully reusable liquid rocket-powered vehicle that takes-off and lands horizontally. The Lynx-family of vehicles serves three primary missions depending on their specific type including: research & scientific missions, private spaceflight, and micro satellite launch (only on the Lynx Mark III). Lynx production models (designated Lynx Mark II) are designed to be robust, multi-mission (research / scientific or private spaceflight) commercial vehicles capable of flying to 100+ km in altitude up to four times per day. Lynx vehicles are available to customers globally on a wet lease basis. (www.xcor.com).

About Space Florida: Space Florida was created to strengthen Florida's position as a global leader in aerospace research, investment, exploration and commerce. As Florida's spaceport authority and aerospace development organization, we are committed to attracting and expanding the next generation of space industry businesses. With its highly trained workforce, proven infrastructure and unparalleled record of achievement, Florida is the ideal location for aerospace businesses to thrive - and Space Florida is the perfect partner to help them succeed. www.spaceflorida.gov